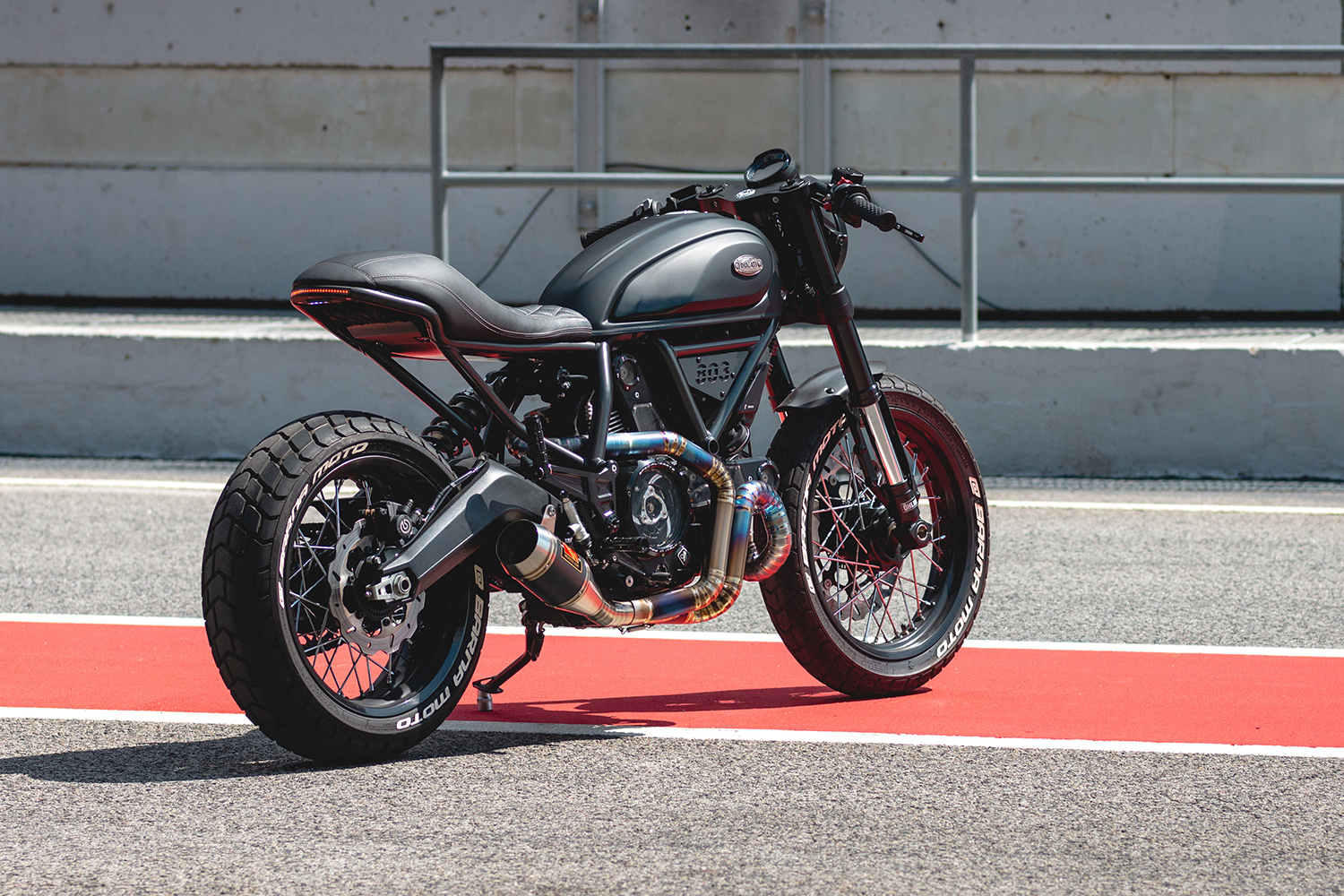 We all know how it goes, just a few small modifications we say to ourselves, knowing all too well that it never stops there. Getting out of hand and going crazy is just part of the custom scene, but Barcelona’s Barnamoto decided that every good deed deserves another, and to match their two-wheeled creation a four-wheeled friend would get the same. So, joining their 2019 Ducati Scrambler Icon custom maker over is a Land Rover Defender that is treated to the very best. Together they make for one hell of a combination, high-end custom style, for those with adventure on their mind.

On the hunt for a new project, a bone stock 2019 Scrambler Icon showed up and it seemed like the perfect bike for just a few simple changes. “I started out with light mods, the classic plug & play, which then snowballed into basically going over the entire bike and seeing what I think could have been improved or upgraded.” Nick Tansley of Barnamoto tells us. But with a love for adventure and the great outdoors, with his beloved Cocker Spaniel by his side, Nick decided that it was time to give the Ducati the works and add a Defender to the party.

Diving into the deep end on two vehicles that are hardly cheap to purchase in the first place, Nick gave his friend Stefan from Kooltcreations a call for a second set of hands. The idea wasn’t to do anything crazy but to make both vehicles better in every single way and fit in with exactly how he intended to use them. The Scrambler is by design a very customisable model, with Ducati themselves offering the range in a host of variants. But there is one area of the bike that always lets them down, the bulky subframe.

Nick knew what he had to do, “Committing to the new subframe on a brand new bike was pretty painful when you’re cutting it but at the same time quite satisfying knowing it’s going to be a major improvement compared to stock.” With that factory metalwork removed, an all-new tube unit has been fabricated and anchors off the original centre post. The new tube crafts a very clean look, with a generous up curve and ultra-clean lines compared to the factory shape.

At the back of the new frame, a separate section supports a recess that allows for an LED light strip to be flush fit into the subframe itself. Between the new metal rails, an electrics tray has been fab’d and fitted up. “To open up the subframe triangle we decided to strip the bike of the ABS unit, upgrade to a lithium battery and relocate it under the seat.” That seat is a very generously padded piece that is then beautifully stitched in black leather. While Kellermann came to the party supplying the indicators that meet strict Spanish road rules and are fully EU compliant.

Moving onto the controls, Nick had an idea of how to give the front of the bike an ultra neat finish. “The top triple clamp we took inspo from an early 2000’s Aprilia RS125 with the integrated clip-ons, so we designed and machined the top triple clamp unit.” The custom piece is very much like the KTM RC390, which delivers a more comfortable ride than lower bars, but with the cool look of a fully integrated unit. Custom pegs in black for both the rider and the passenger complete the controls and are perfectly set up for Nick’s riding style.

The engine doesn’t miss out either, and visually the classically shaped Ducati L-Twin has been overhauled with a clear clutch cover that is mesmerising to look at and clear belt covers for the same effect. “Originally the bike was built with stainless steel pie cut headers but last minute I decided it was worth the extra effort to make the exhaust system from titanium. As you can see the results speak for themselves, it sounds better, looks better & performs better.” With a Competition Werkes polished muffler against the all-new black paintwork, the exhaust sure does pop!

Enjoying time off the beaten track meant the handling would require more of a transformation than just the grippy Pirelli dual sport tyres. So the front end now swings a full set of Ohlins shocks, perfectly matched to the radial Brembo caliper halted brakes. Fitted up to the back of the Landy is a rack that allows it to carry the Scrambler in style.

With the 4X4 also sporting blacked-out wheels, white lettered rubber like its little cousin, and a roof-mounted tent for those glorious nights out in nature. Of course, as the sun breaks the horizon in the morning, Nick is first up to climb aboard his Scrambler and give it the beans, taking him places that four wheels just never can.