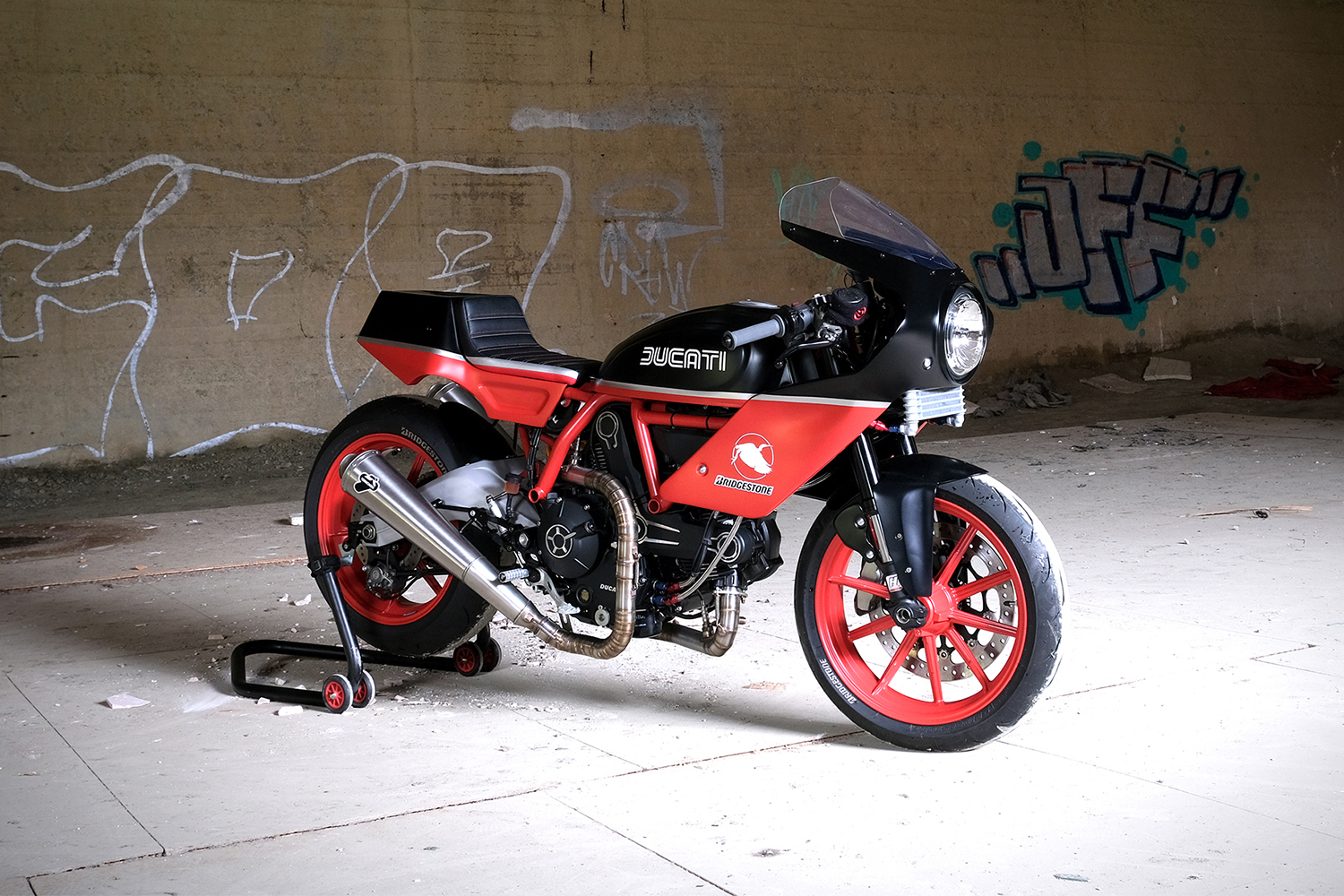 In the late ’70s, about the only motorcycles you saw with a full fairing were wearing aftermarket pieces that were both horribly heavy and as ugly as sin. But with the advent of the breakaway TT Formula race series, manufacturers were forced to homologate their machinery to compete, and with the Isle of Man the key race on the calendar, wind protection was now huge factor. Many of the first TT Formula machines weren’t any better looking than previous efforts but leave it to the Italians to make sure they had a beautiful bike. Inspired by that Ducati TT1, Austria’s Reier Motors have taken a modern Ducati Scrambler and transformed it into a stunning homage to that race bike of old.

With the fatal loss of riders mounting, and popular champions like Agostini boycotting the event, by the time 1977 came around, the Isle of Man TT was no longer part of the world championship. To come up with new categories for the event, the ACU formulated the TT classes 1, 2, and 3 to join the event and eventually become a full series. Based on production bikes, Ducati came out swinging in TT2 with a gorgeous fully faired machine that Tony Rutter (Father of current competitor Michael) rode to four world title victories and four TT wins. Along with the 750SS and the 916, it is arguably Ducati’s most beloved production racer, but it has never gotten the credit it deserves.

So, when Christian from Reier Motors got his hands on a model version of a Ducati TT, he knew he had to bring one to life. Growing up a racer both on the track and in motocross, he’s highly skilled at setting up a bike to perform at its best, and since 2016 he’s also been building incredible customs for the public. The TT project would now give him a chance to show off his metal working skills and build a production-styled racer for the street. With the original bikes featuring the famed Taglioni trellis frame, a modern Scrambler with its matching frame and L-Twin engine was the perfect base.

To prepare the frame, the subframe was shortened, a bunch of brackets removed, and then it was all smoothed out in preparation for that stunning red finish. Now Christian could get the alloy and hammer out and start to shape his masterpiece, “I am especially proud of the fairing and the fenders front and rear, everything was peened by hand.” Starting at the rear, the tailpiece captures the essence of the TT bikes, with the squared-off lines and prominent back section. Just like the original, the tailpiece also acts as the side covers, however, Christian has added some of his own neat cut-outs.

The front fairing is a work of art, picking up the half-covered look that Ducati would later adopt, but with key inspiration from the TT around the handlebar cut-outs and the way the headlight section tapers around to the sides. To mount these two main pieces, Christian fabricated all new brackets for the rear and then built a custom fairing stay at the front from small diameter tube that does its very best to keep out of the rider’s way. Keeping things functional is the stock headlight, with a custom cut Perspex screen and a pair of taillight strips for the rear.

With the way the fairing sits, the headlight needed to be remounted, and to achieve this a new support section was machined from 7075 aluminium. With the tools still spinning, Christian then machined an ultra-neat aluminium top triple clamp. With the forks out, he took the opportunity to rebuild them to his own custom spec, which includes an internal lowering. At the rear, the stock shock is not the worst, but for the type of handling he was after, our man in Austria picked up a fully adjustable Ohlins unit.

To finish off the roller, the front rim is taken from the Cafe Racer version of the Scrambler range, and both ends get wrapped up in Bridgestone Battlax tyres. Committed to the race bike appearance, the rear caliper is now under-slung, with a custom support rod that runs up to the engine for bracing. Now Christian could turn to extracting some more horsepower from the classic L-Twin, and a handmade pair of equal length headers look the part and finish out with a set of Termi pipes. To improve performance and looks, the oil-cooler is from a Monster 900 and is now mounted out the front of the bike.

With the tins off for paint, a custom battery and electrics tray was fabricated to neatly hide all the essentials, and the ABS box was re-routed to fit. The paint job is a beauty, the temptation to go for gloss has been shunned with a period correct flat red finish, complemented by matte black and the correct Ducati logos. A local upholstery shop took care of the seat, and again they’ve done a terrific job of matching the colours and giving the bike the classic stitch job.

Some parts from Ducabike finish out the build, and Reier not only has a stunning TT racer on their hands, but with the big bikes taking to the Mountain course tonight, Christian can catch the action and then hit the streets looking as good as Rutter’s winning machine.