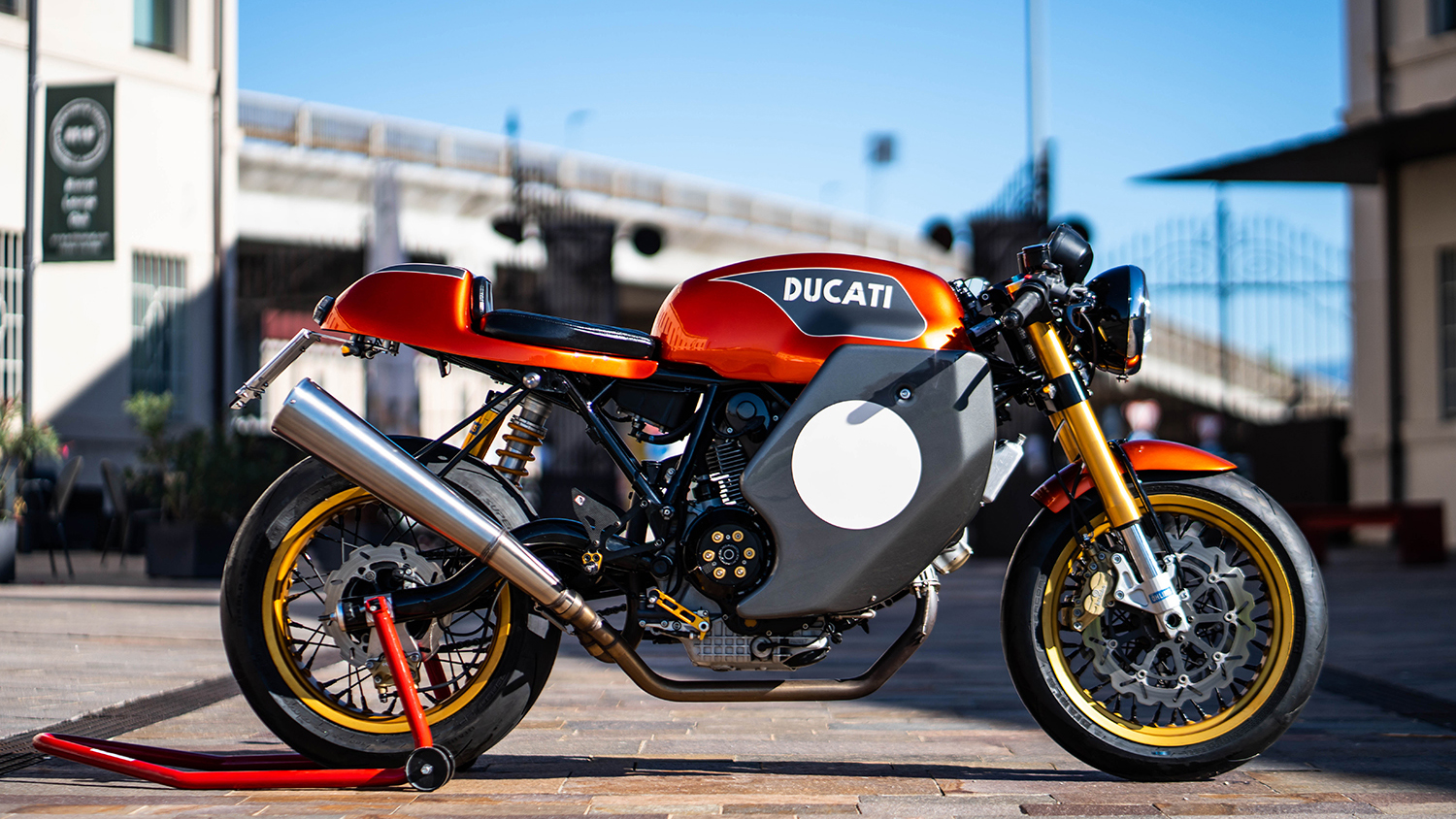 It’s been said a million times, the custom motorcycle scene was forged by those who refused to play by the rules. But it seems everyone is a rebel until it comes time for rebellion, and then convention starts to sneak in as many backpedal into the safe arms of the status quo. Not Italian Nicola Martini, he’s been building custom bikes for three decades and he’s never been too concerned about fitting in, just look at his signature red top hat that goes with his shop overalls. The Ducati SportClassic range has been making a comeback of late, so it made perfect sense for the Verona-based custom bike wizard to toss predictability aside and give some vintage racer appeal to the bike Mr Martini calls A Clockwork Orange.

In Italian, the name is of course Arancia Meccanica, the title used in the country for the classic Kubrick masterpiece that is as disturbing as it is brilliant. And it’s not just the colour, there is something about Nicola’s creation that seems like it would be the perfect bike on which Alex could make an escape. That is not of course how Ducati or designer Pierre Terblanche saw their SportClassic creation, breaking cover at the 2003 Tokyo Motor Show, the model line-up was designed to be a throwback to the quintessentially beautiful motorcycle of old.

Sitting down to design his creation, Nicola never sought to take those features away, but simply to add his own unique twist knowing that there is always a customer who will absolutely embrace his vision. Starting with a 2006 Sport1000 version of the beloved Bologna beauty, meant that Nicola was starting with the most stripped down, cafe-raceresque version of the model that the company had offered for sale. The factory tank, inspired by the Imola Desmo is a gorgeous thing, but the wide as a big butt tail section always received mixed reviews and it is here that Mr Martini makes his first change.

With that plastic piece removed, the subframe exposed below is also very wide and not of a bolt-on design, so the only option was to fire the angle grinder into life. Trimmed down and cleaned up, it along with the rest of the frame has been recoated in black for a super clean appearance. Over the new rear end, a custom Mr Martini tailpiece has been beautifully crafted to give that more slimmed-down cafe vibe, while also managing to clear the shock mount. The front section of the piece is neatly folded over the frame and the all important seat to tail transition is spot on.

The next item would require complete custom fabrication, with Mr Martini well known for his half-fairing side panels that he uses on otherwise naked machines. A conventional half fairing would incorporate the front cowl, but this design offers a unique look, with a level of protection for the engine and some wind stopping around the legs. Popular in Italy, some big bodywork manufacturers have ‘borrowed’ the design for the Ducati Scrambler range. With the custom mounts complete and the bodywork all taken back to bare, it was time for paint.

The colours chosen for the task are custom mixed, with the names very appropriately titled for the build, Clockwork Orange and Borgo Roma Grey. A white number panel is applied to each side and the tank graphics are completed using a mix of the colour palette, with vintage-styled lettering for the logo. Garage 66 was entrusted with applying the final colour and while the tins were out for paint, Tommy Casaro pieced together a stunning vintage leather seat to suit the style of the ride.

The stock spoked rims are actually a very nice piece of kit, but everything can be improved upon, and Nicola kept the look but with less weight and more tyre options by choosing an amazing set of Alpina wheels. The gold rims with beefy spokes feature machined hubs and they’ve been wrapped up in Pirelli rubber.

The braking was always good from the factory-fitted Brembo calipers, but a pair of Braking discs gives the bite of a modern material. While the suspension is perfectly plush and offers a sporty ride thanks to fully rebuilt and adjustable Ohlins equipment at both ends of the bike.

The remainder of the modifications were about ensuring the rider has the full Ducati experience, and nothing does that like a carbon fibre Ducabike dry clutch kit for the distinctive rattle. That sound is offset by the roar of the Desmo twin barking out of a classicaly-styled stainless exhaust from Termignoni. A set of LSL bars and custom rearsets with carbon guards get the rider tucked in, while not being too cramped and a single mirror helps to keep the lines clean.

A full re-wire and lighting package ticks that box too, and Mr Martini’s timepiece sounded the alarm to down tools. A Clockwork Orange might make the conservative amongst us a little uncomfortable, but just like Kubrick, our man in Verona is always happy to walk on the wild side.