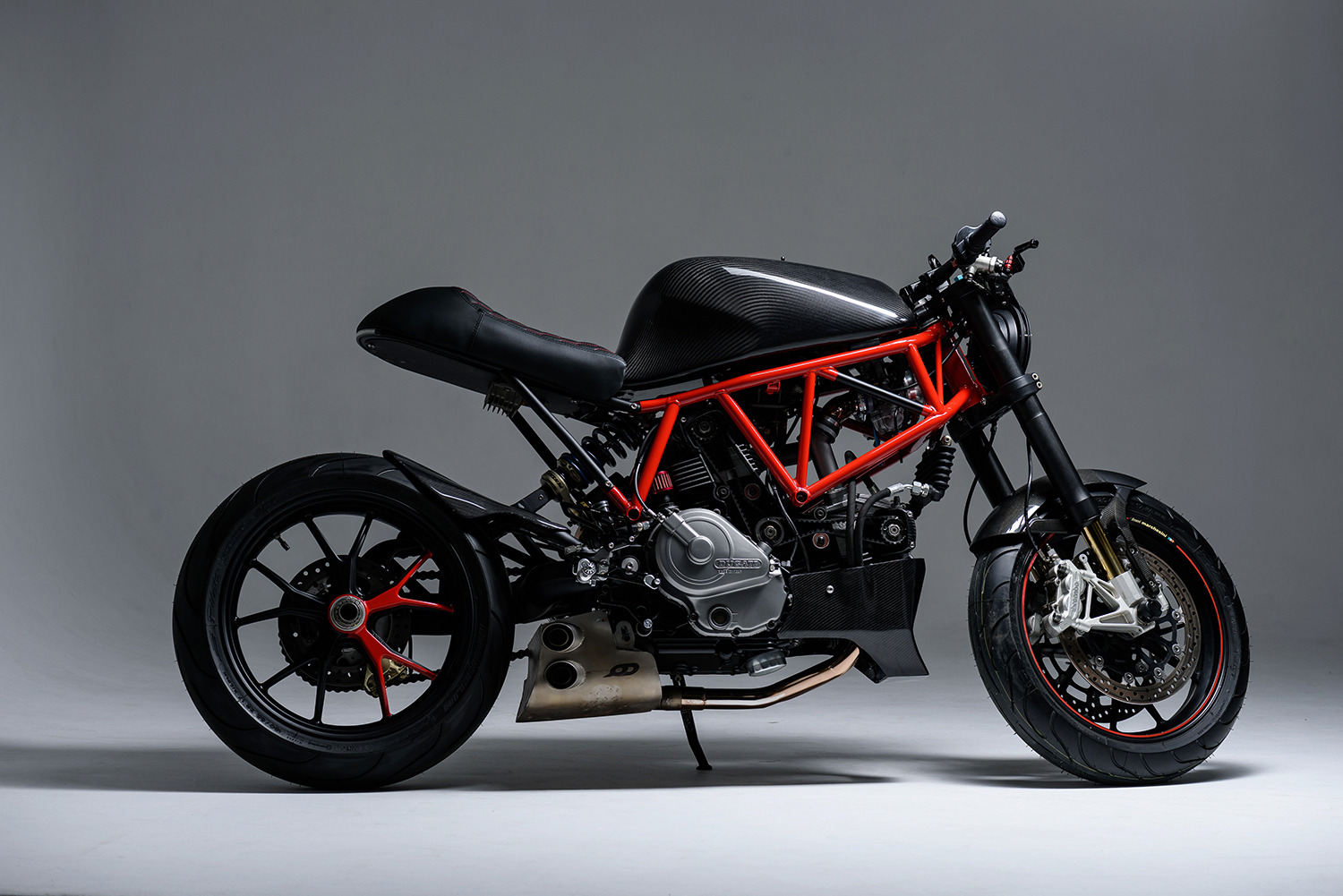 No matter how many motorcycles we might be lucky enough to own throughout a lifetime, there is often a favourite in amongst the bunch. It could be the first bike we owned that got us onto two-wheels, or a machine that we shared a special journey with, and sometimes we just love it because we love it. If you sell that bike, maybe it won’t kick in for a while, but eventually you’ll miss it as if it was a lover you should have never let go of. Thankfully for Vitaliy Selyukov of Balamutti workshop, a man we affectionately call the mad scientist, he had such a bike and just could never give it up. But being the bike builder extraordinaire he is, it had to come in for a makeover. From his adorable little Ducati 400SS comes this big-bore, carbon clad cocktail, that he calls Negroni.

The 400SS comes from a strange time in Ducati history when the company wasn’t exactly thriving and with a need to make more sales, the decision was taken to build a bike for markets where smaller was often better or desired for license restrictions. Rather than go and design a true little sports bike screamer like the Kawasaki ZXR250, Ducati sleeved down a bigger engine, banged it in a 750 frame and fitted it with the bare basics. It was underpowered and overweight for what it was, but hey, it was a Ducati and for some that was all that mattered.

More than 30 years on and few remain, which is probably partly why Vitaliy found it even harder to get rid of the little Duc, and hey, it’s Italian! So, the first step was to pull the engine and turn it into something with the sort of power worthy of a Balamutti build! Thankfully because Ducati used essentially the same architecture for all the air-cooled lumps of the period this is a little easier than it might be on another make. The long block with its distinctive covers remains, while the barrels and heads get switched over to those that would help increase the capacity and flow enough air to fill the chambers.

Inside the crank has been yanked out and replaced with a longer stroke item, with the rods now topped with a set of high-quality forged pistons. A new oil cooler was fitted with custom lines and then breather for the crankcase. The capacity had now taken a big jump from 398cc to 846cc and more than double the volume was going to need a seriously big step up on the carb side of things. A set of new intakes holds flat slide carbs for snappy throttle response and a set of velocity stacks have been wisely screened off. The exhaust uses a distinctively wild box muffler, and the runners are finished in a stunning coat of titanium nitride.

Now with such a hot engine, Vitaliy couldn’t just slot it into the stock frame with that ageing fairing, he needed an all-new look. To begin with he cut the subframe off the chassis and left just a few inches above the rear engine mount. From here a new tubular rear frame was fabricated that bolts on and is far shorter and cleaner than the stock item. To highlight the contrast the original metal is finished in red and the new section in black. More new metal comes in the way of the gorgeous single-sided swingarm taken from an S2R Monster and this too has been finished in black.

Keen eyes will notice that the shock mount has been changed to work with the 400 frame and a new mount fabricated for the swingarm that is no longer designed for the S2R’s vertical fixing. With the welding done the right shock had to be selected, and nothing says you love your bike like treating it to a fully adjustable Penske shock! To bring the front end up to scratch a hunt was planned for some Italian parts to stir into Negroni and a bearing change allows for a full Aprilia RSV fork and brake package to be slotted in. With a new upper triple clamp, a set of Rizoma risers and bars then gives the pilot a more comfortable riding position.

Now for those who follow the work of Balamutti you might be expecting some seriously radical bodywork, but this bike does that in one area, weight saving! To achieve it, just about every part is made from carbon fibre, from the glorious SS styled fuel tank with a flush fit filler, to the rear hugger and the slick front fender. Friend Leonid from Driveinworkshop stepped in to help with the lower cowl that is meshed out with aluminium and the same look is applied to the cam gears to expose the belts. To finish out the carbon work, the front LED headlight is topped with a small carbon screen that helps to balance out the front end.

In-house painter Anton who is known by his moniker Octopus_art_aerografia, sprayed the rear wheel to match the rest of the colour scheme and hit a bunch of the parts with the same flat black. Under the seat sits the basic electronics package that sits on a custom tray and then a generously padded seat was stitched up to make time in the saddle a pleasant place to be. Finishing out the controls is a seriously cool set of rear sets, and the levers don’t let the team down. Before, finally, Vitaliy got creative and moved the instruments to the left side of the bike to clean things up.

It’s a long way from the original 400 fully-faired machine, but with all the extra power and carbon cool looks, it will still always be the bike that Mr Balamutti first fell in love with. Now, with one perfect Negroni, it’s time to drink it in.