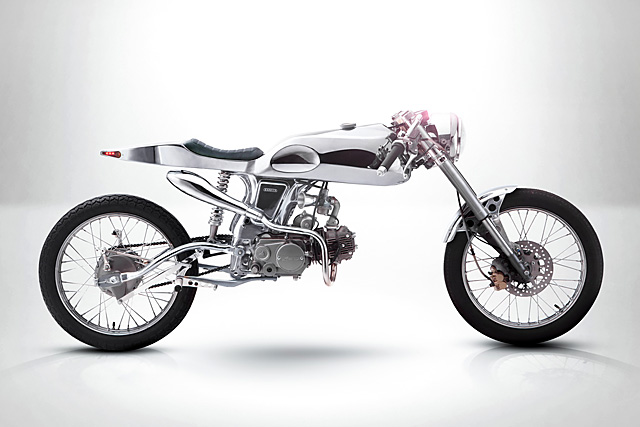 There is a famous quote that goes something like this. “No one ever achieved greatness by playing it safe.” And yet for the vast majority of us, we play it safe all of our lives. We stay at the job we don’t love because it pays the bills. We eat the same foods. We take the same road to work and we go to the same draw of clothes day in and day out. This is where the custom motorcycle scene plays a significant role in the lives of many. It’s where they throw off the shackles, live on the wild side and do things differently with a license for freedom they don’t normally afford themselves. But one man takes that freedom even further; he pushes the limits of motorcycle design so far his inspiration is actually drawn from art, sci-fi films and a desire to reach the ultimate Zen state of mind. Daryl “Dazza” Villanueva of Bandit9 is back and his latest limited production run machine, known as EDEN, is the ultimate expression of not playing it safe. “The EDEN was designed for those who, like us, expect a lot more from a motorcycle. It’s never been about cold hard specs at Bandit9. All of that fades into the background when you begin to appreciate what the bike was intended to do. While the EDEN is a fully functioning motorcycle capable of highway speeds and perfect for inner city travel, it is so much more than a commuter tool.”

For Daryl the speed at which motorcycle design has evolved has simply been too slow and while many of us like the fit of a well-worn pair of boots he is constantly looking to the future and ways he can take a giant leap ahead. If you look at the large modern crop of Superbikes from around the world he has a point, they all share a common silhouette, use the same suspension and braking configuration, around 1000cc and even rely on many of the exact same electronic riders aids produced by individual suppliers. The EDEN is none of those things nor is it trying to be, in fact it starts its life at the complete opposite end of the motorcycle spectrum to any of the modern-day Superbikes. It’s “based on a 1967 Honda Supersport, the EDEN has been rebuilt and redesigned from the ground up to fit to our concept of the future. Apart from the frame, little else remains from the original Supersport design.

That classic Honda frame with its pistol like shape has been extended and reworked to give a longer wheel base and stretch the stance of the bike so as to appear much larger than its original dimensions could ever claim. That is further accentuated by a change to the neck’s geometry to greatly increase the rake for a long and low appearance that begins to hint at the Sci-Fi inspiration which flows through Daryl’s veins.

But nothing quite fills that description like the incredible unibody that forms the entire body work of EDEN, “The fuel tank and rear cowl, fashioned from stainless steel, have been integrated into a single, uninterrupted form. The EDEN’s delicate lines flow like water. In motion, the reflection of your environment moves like ripples…, it’s mesmerizing.” And you can’t blame Daryl for being excited about what he has created, fashioning a unibody with such incredible shapes and forms is an incredible feet of fabrication on its own.

But doing so from stainless steel is even more impressive, it can be an extremely difficult material to work with at the best of times and many simply avoid it, but for Daryl it’s about ignoring the rules the rest of us subscribe to. Just to further complicate the process but show his commitment to rideability the unibody construction includes knee dents to allow the rider to truly tuck in and a slim profile at the crucial meeting of the seat and tank for extra comfort. While the rears dramatic lines features neatly frenched in tail lights on either side for the cleanest of finishes. But it’s not just the large elements, Bandit9 also make sure the details give something for the eye to be drawn to after the initial design has been digested. There is the headlight, taken from a Wrangler that then uses a hand formed bezel to match the body’s smooth design. The front fender is a heavily bobbed standard motorcycle item, but the punched alloy mounts give it an entirely unique appearance and finally “The Black Marble gas cap is exquisite, bringing a new level of luxury and style to motorcycles. The black marble is encased in a brushed bezel with knurled edges. The marble pattern is carefully chosen and delicately cut from a slab of Tuscan polished marble, making each and every EDEN unique.”

To finish out the metal work the colour was something that Daryl wanted to experiment with having used predominantly black or chromed stainless in the past. A mix of bronze, copper and silver chrome result in a champagne gold finish that gives a softness to the bike’s already swooping design. This colour is also worn by the all new swingarm that may pivot from the stock location but that’s about all it shares with the standard part. The clean flowing lines as opposed to the box section material allow for increased negative space to compliment that which already surrounds the engine in spades. It’s a mono-shock style design but as seen on previous Bandit9 builds incorporates two shocks in the central position for a unique technical aesthetic. But it’s the choice of inverted shocks at the front of the bike that are truly inspired, normally on such a small machine they would be deemed overkill, but due to the unibody construction, wearing the weight of the fork as close to the body as possible and not at the extremities produces a seamless look and only adds to the functionality. With EDEN being such a light weight machine the single disc front and rear drum brake with custom support bracket are more than adequate in the braking department.

Powering the party is a 125cc Honda lay down style engine as previous used on AVA, another of the Bandit9 fleet. Not only does it work exceptionally well in the Supersport style frame for which it was initially designed it also provides a level of reliability and cheap servicing that such works of automotive art normally do not afford. With all the wiring hidden behind the pressed steel side covers it allows the little engine to show off its mechanical muscle and the single velocity stack is a perfect touch. “The silver muffler, inspired by Brancusi’s sculptures, is handcrafted from lightweight steel and polished to a perfect glass-like finish. Its asymmetry makes the muffler feel like a fine sculpture piece. As graceful as it looks, it sounds like a well-engineered canon when you pull on the throttle.” The controls are kept neat and simple with Bandit9’s own rearsets and a set of clip-ons wearing only the bare essentials.

The final piece to go onto this rolling and riding sculpture is the stunning hand-stitched seat, covered by Italian calf leather dyed in a Cognac brown. For Daryl the bike represents “a license to dream. It’s like owning a working film prop from the latest Star Wars flick. It’s a statement piece that sits like a sculpture in the corner of your home office. With a limited production run of 9 units, the EDEN can be a part of any car collector’s ensemble of rare vehicles. That’s what we think a modern motorcycle should be able to do.” At just USD 11,900 for each of the nine EDEN’s that will be made it’s a cheap price to pay for a modern piece of art, the fact you can ride it every day and truly throw off the shackles of your safe existence is a bonus that comes with being a biker who dares to dream.