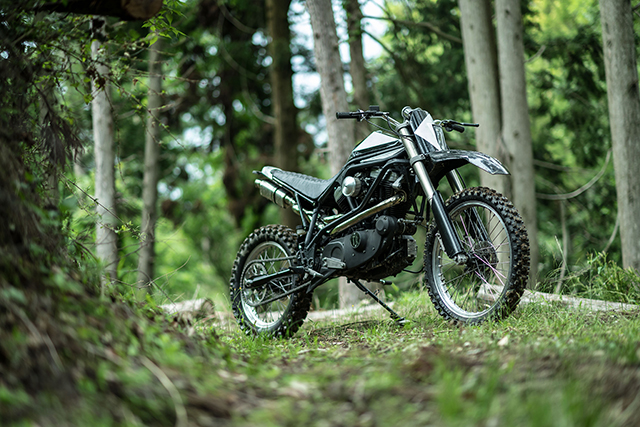 On the outside it looks like a simple little building, with faded weatherboards and an old tin roof in a small historic town in Japan. Surrounded by neatly ploughed fields you step inside and expect to see an old man repairing dated farming machinery, instead you’ve entered the home of one of the world’s best custom bike shops. But despite becoming renowned for their concept BMW R18 ‘Departed’, the bread and butter of Custom Works Zon is American V-Twin muscle. And with a desire to play in the nearby mountain mud they’ve turned an unloved Buell X1 Lighting into a true weekend warrior. 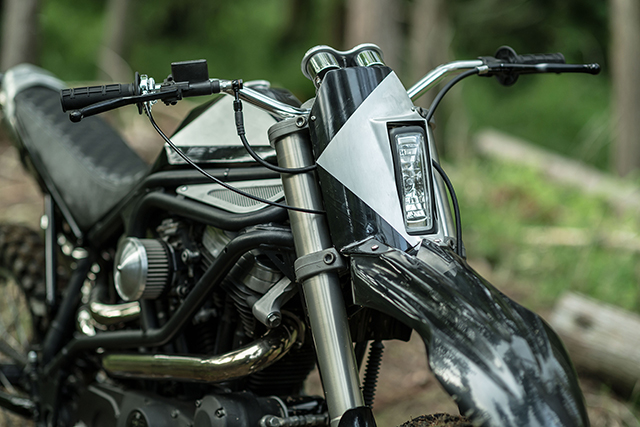 The BMW project started with the CW-Zon team of Yuichi Yoshizawa and Yoshikazu Ueda taking a secret trip to Bavaria to see the new R18 engine and ended with their concept creation containing the mighty motor winning “Best of Show” at last years Yokohama Hot Rod Custom Show. The massive German motoring company could have chosen any builder on the planet, so what made them pick CW-Zon out of rural Japan? The sheer quality of their work. 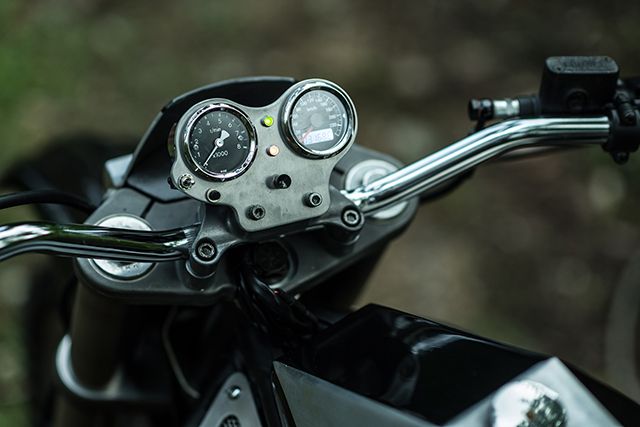 The shop is proud of their Harley-Davidson credentials, with sales, repair and full-blown customisation of everything from brand new Sportsters to old WL models available. Part of their business includes importing American V-Twins and the X1 Lightning is a cheap way to start a project. Damaged bikes aren’t a problem as there is literally nothing CW-Zon can’t do. So this particular X1 was pulled down to a bare frame and most of the bike pushed to the side including the signature alloy swingarm. 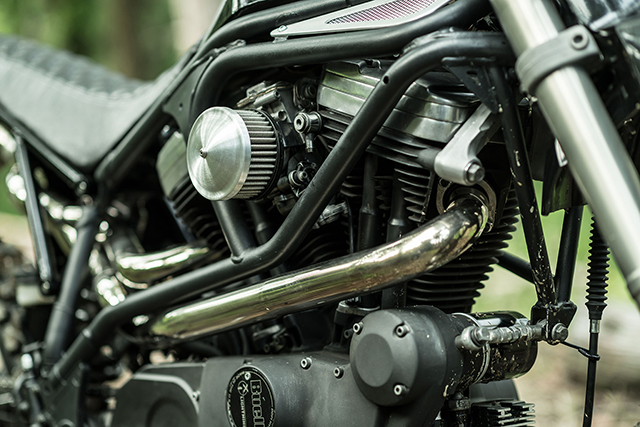 The steel frame is far more conventional than most Buell’s, there’s no fuel in this one, making a full one-off custom an easier task. The first step for Yuichi and Yoshikazu was to fabricate a swingarm from matching steel tube with the length, geometry, and rigidity to suit the type of riding style they had in mind. The simple yet clever design gets the rear wheel further back for stability and ditching the belt drive comes with a decent weight saving. Just like the swingarm, the alloy subframe is binned and with the CNC and welder still running a new one pieced together. 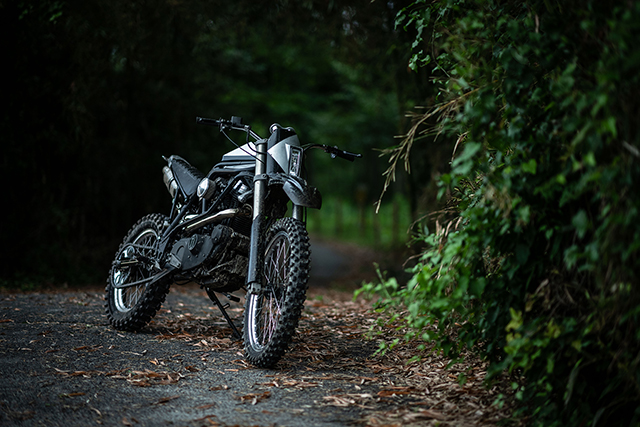 To turn it into a roller the wheels are taken from the Aprilia racing catalogue with each end wrapped up in Metzeler MC 360 rubber in a Mid Hard for the conditions they had in mind. The axles and spacers to make them fit are machined in house on the huge old Daiwa lathe. While more machine work was required to adapt the small yet powerful Aprilia racing brakes front and rear. The front forks are the Showa 41mm units that came with the Buell, rebuilt for off-road work. While at the back, a big dollar Gears Racing shock joins the new swingarm to the frame. 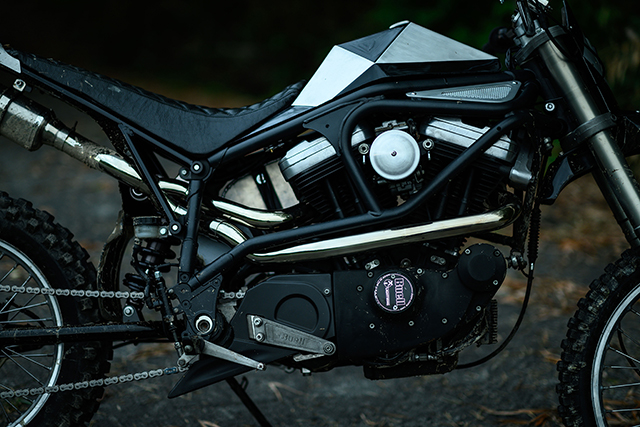 Custom bodywork on any Buell is made more complicated by the perimeter frame making it impossible to simply adapt anything off the shelf. So from one large sheet of aluminium the boys bent, trimmed and welded until they had a unique item that slots perfectly between the rails. The same technique was used to craft the custom oil tank, this time with more rounded edges. While the small tail section shows off their skills in another field, with a stamped logo sitting proud. 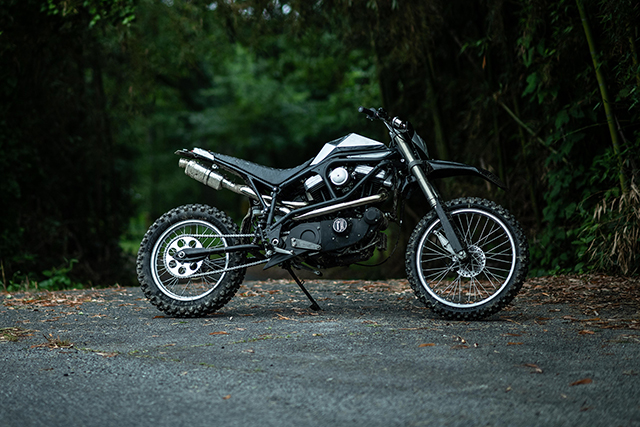 Up front a single rectangular headlight shines the way with more custom aluminium fabrication used to form the neat headlight surround that gives the bike a distinctive style. Underneath it’s all function with the front fender from a Yamaha dirt bike modified to fit and the rear end utilising a hand made inner fender to keep the mud at bay. While the black and brushed finish paint was completed in house and is topped off with perfect hand laid gold graphics. 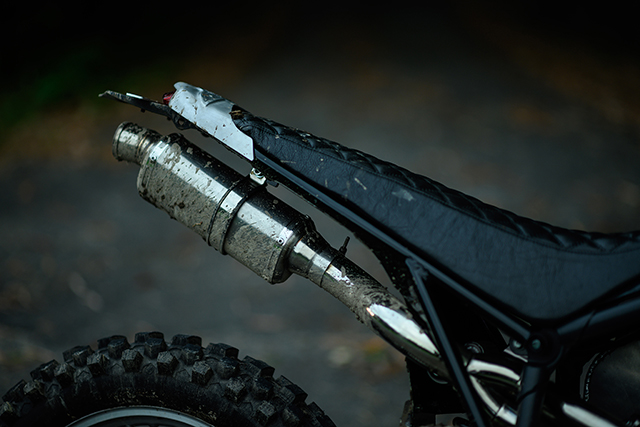 To give the Buell some bark through the forest, the team set about bending up a custom exhaust that runs tight to the engine and exits out the rear. With extra performance coming via an FCR carb that sports a Mooneyes air filter unit. The wide bars for wrestling the beast were another in-house operation, so too the tiny instrument cluster that replaces the enormous factory item. With it all wrapped up the Custom Works Zon crew now have the perfect excuse for a Sunday session in the mountains, dirt laden rooster tails in the air, the perfect way to relax after a week on the tools. 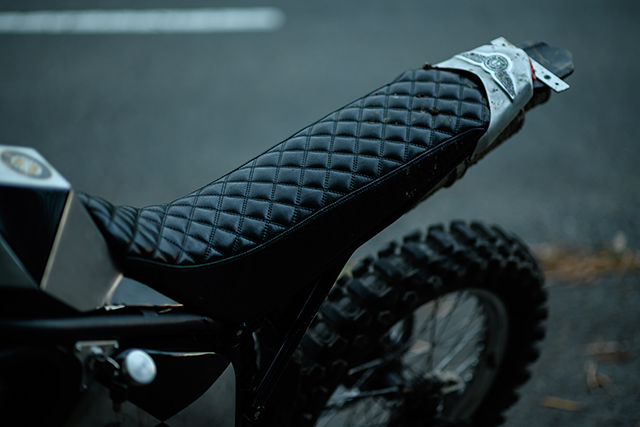 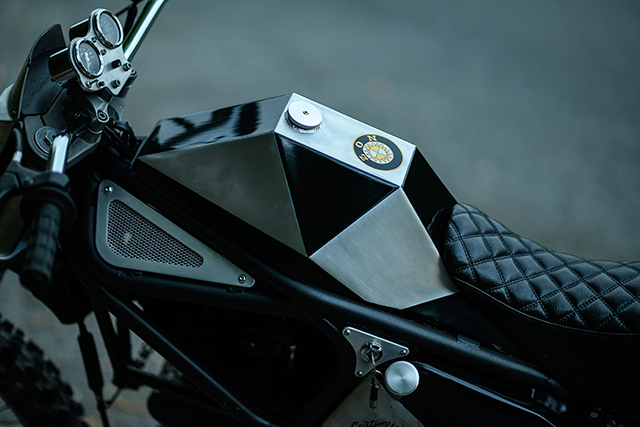 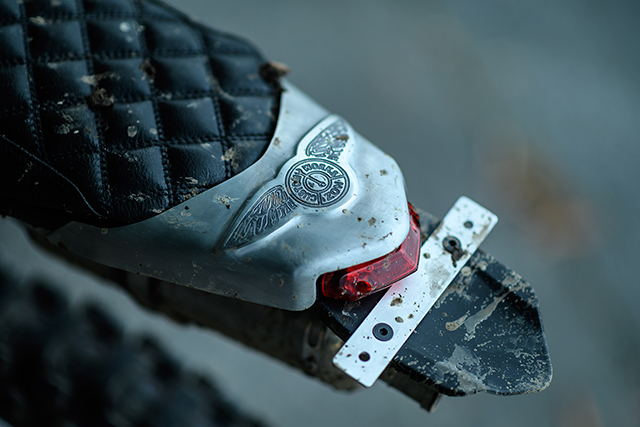 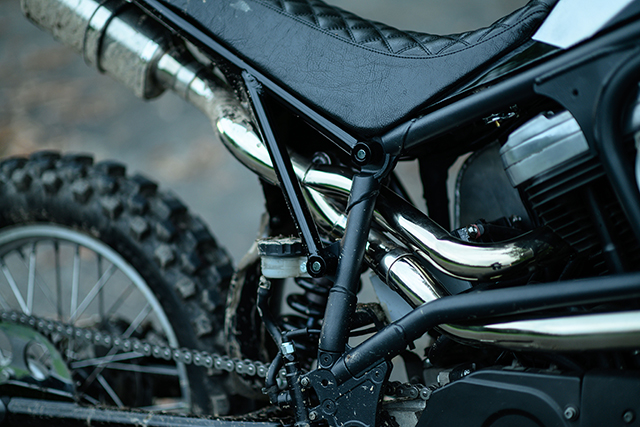 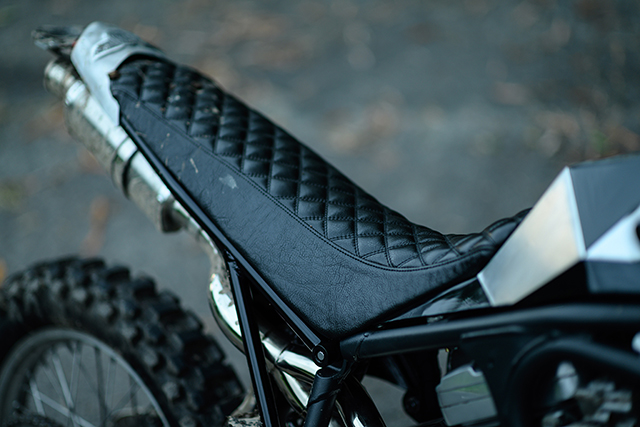 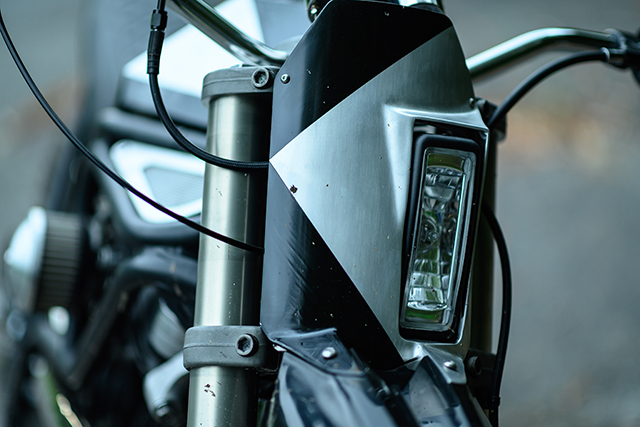 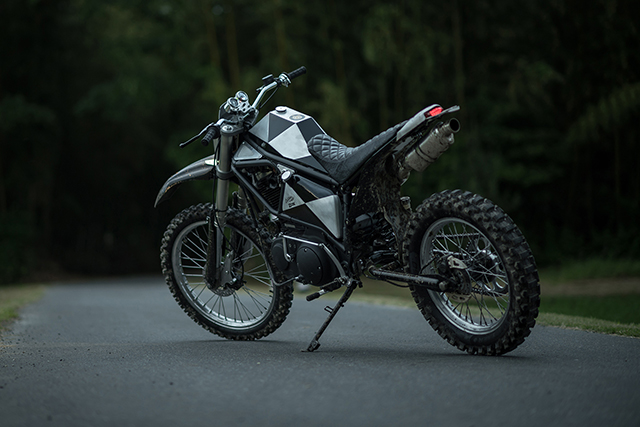 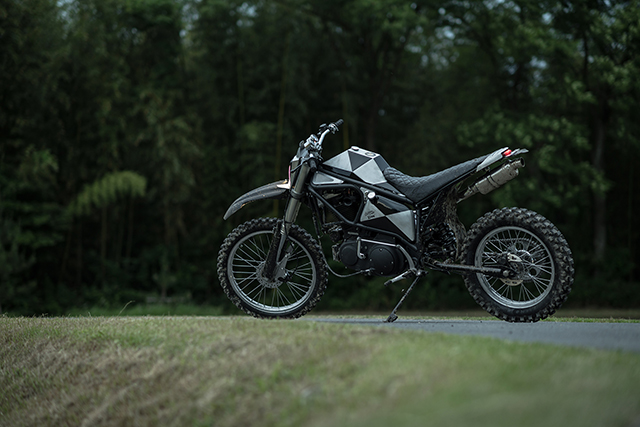 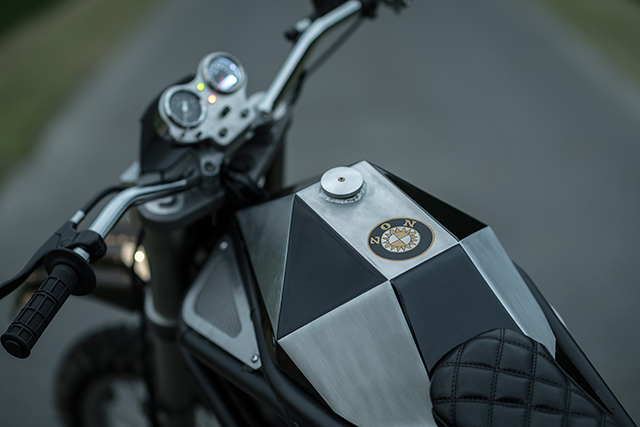 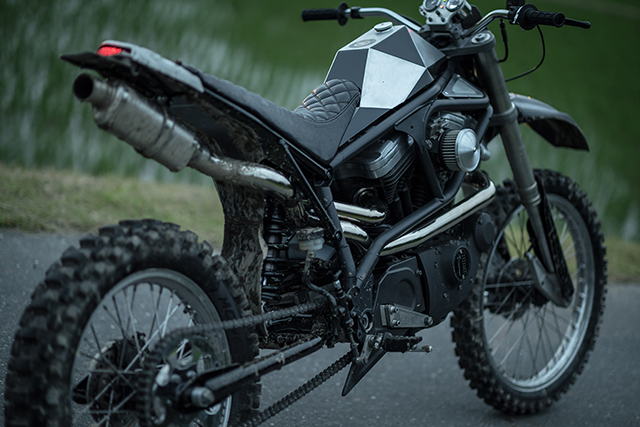 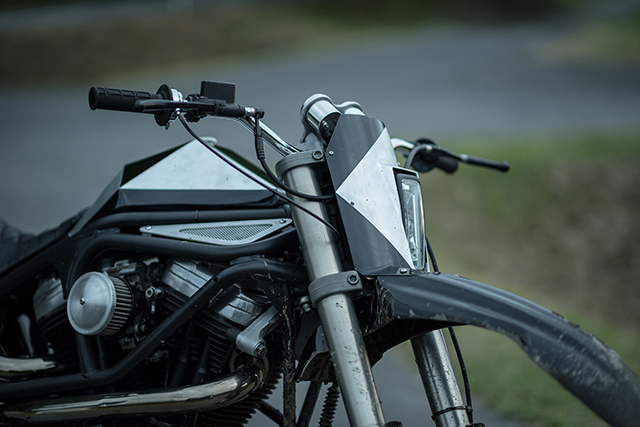 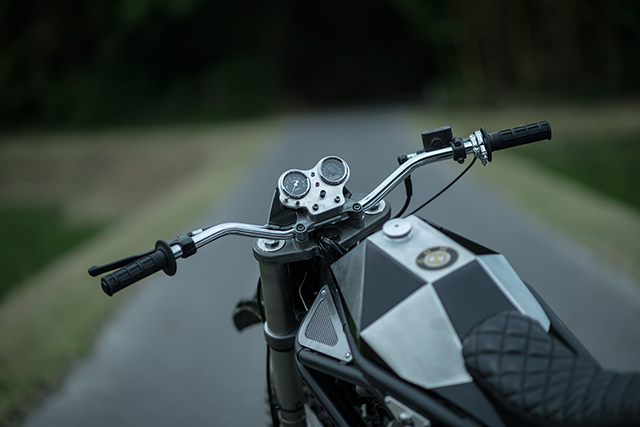 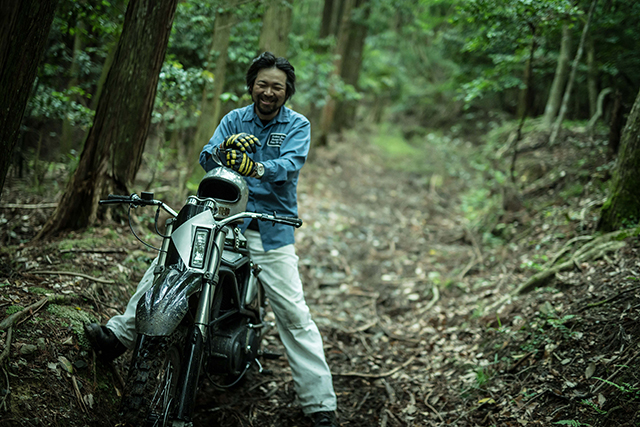 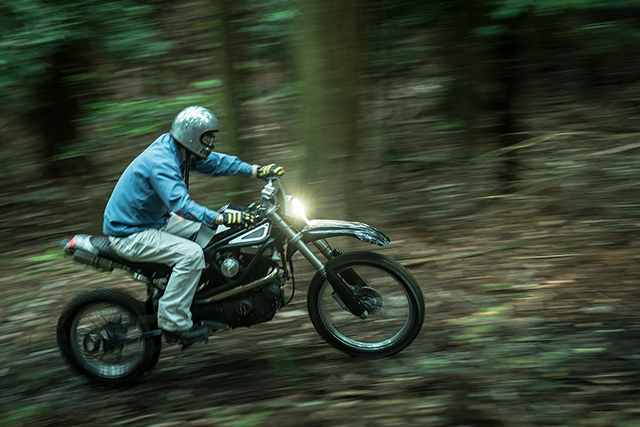