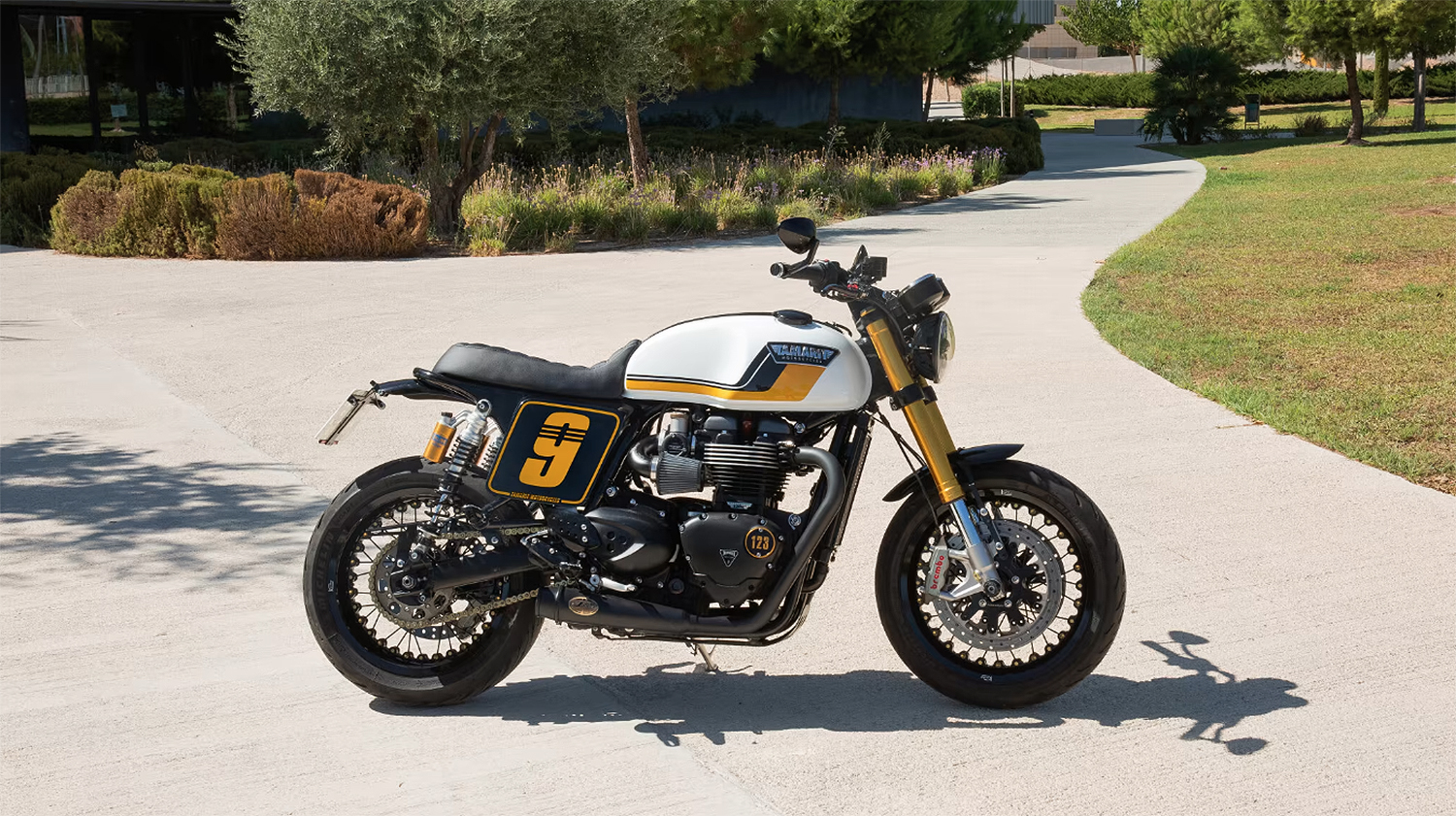 We tend to think of custom bike shops as relatively small places in the backstreets of major cities; chaotic, with bikes everywhere and a grease and grit atmosphere. And that is true of plenty, but Spain’s Tamarit Motorcycles have taken the procurement of your next personalised piece of two-wheeled perfection to all new heights. They might be located in regional Spain, a few hours south of Valencia, but their approach is global and wherever you are in the world they’re happy to service your needs from the first phone call to final delivery. Their latest build is a custom chariot ready to carry their client into battle, a Triumph Thruxton 1200 R known as Espartana.

There is more than one way to skin a cat, and Tamarit’s approach is a fantastic mix of old-fashioned customer service and the brilliant use of 21st century technology. They refer to their clients as friends, and from the initial discussion, that friend is involved in the build at every step. With budget and an end goal worked out, modern design techniques are used to create computer-generated renderings from which the new friend can help to fine tune the look and their desired details, then elite craftsmen turn out a finished bike, and delivery is complete with certification of an engineer’s final inspection.

With this being their 123rd full custom build, it is a process that has been refined brilliantly over the years, and when a new friend came knocking, they knew the Triumph Thruxton 1200 R would serve as the perfect base. One of Tamarit’s core focuses is on engine building and being the best in the world at overhauling the internals of Triumph’s modern liquid-cooled twins. And they don’t get any more special than that strapped into the R. With a long 80mm stroke and 4 valves per cylinder from a single cam, the internal overhaul is designed to boost the already impressive torque.

On the outside of the engine, the restrictive Euro 4 compliant exhaust which is also one heavy system, gets opened up with a new set of blacked-out ceramic coated headers and matching Zard mufflers. To ram the air into the engine, FreeSpirit pod style filters are attached to forward facing inlet tubes, which also help the big 1200cc engine draw in cooler air. The final horsepower figure is now well over 100 ponies, but it’s the 120+NM of torque that gives a figure equal to that of a V4 Panigale, seriously impressive!

With such a solid driveline, details and smart ones at that were the main point of call for the rest of the build and ditching weight, and that long tail was next on the list. The big rear fender is gone, and so too the old school cafe tail section, with the subframe cut back and a neat hooped rear now incorporating a frenched in LED taillight. To keep the rider clean, the new metal work has tabs welded on that support a Tamarit hand rolled shorty fender, while the front uses a blade style fender on custom mounts. Sticking with the handmade theme, the seat is a beauty, stunning black leather, with a matching tank strap, and a built for comfort seat to tank union.

The tank, swingarm, filler cap, triple trees, and a host of other parts were stripped of their paint and the team began to envision a colour scheme for the bike. The owner was after a set of side covers with their favourite number on them, but before they were made, the team had a clever idea. First, they relocated all of the wiring and electronics that would normally sit behind the side covers and under the seat. Then a pair of storage boxes were built that slot into the negative space that had now been revealed. Finally, a pair of removable side covers were built that clip into the boxes, and the rider has a convenient place to store a few mobile phones, wallets, and other small items.

Now the paint could be laid down and again Tamarit thinks outside the box and are always looking for ways to better what they do. For the swingarm and some other core components, the process of electrostatic painting was employed, which uses positively-charged paint particles from a specialised gun to coat grounded metal surfaces. A neat, hard finish, with no overspray and little clean up!

Next, the engine got a full coat of paint, a file finish, and its own custom badging, before it was time to wave the wand over the tank. The black and white theme is broken up by the use of an ochre instead of a bright yellow and this works perfectly with the Ohlins suspension at each end.

The Brembo brakes provide all the stopping power you could ever desire and a big dollar set of Kineo rims finished in black and ochre are the absolutely perfect set of rolling stock for the machine. The loom is all new and custom made, with it minimised down to the basics so that it can be easily hidden away and Motogadget products used to finish it out. The headlight is very clever, an adaptive LED item that turns the beam as you turn the bars and brilliantly illuminates those fun back country roads.

To complete the build a set of custom Tamarit badges was made for a personalised touch and it’s now time for the new owner to climb aboard his warrior woman, a beautifully dressed Spartan with a powerful punch.