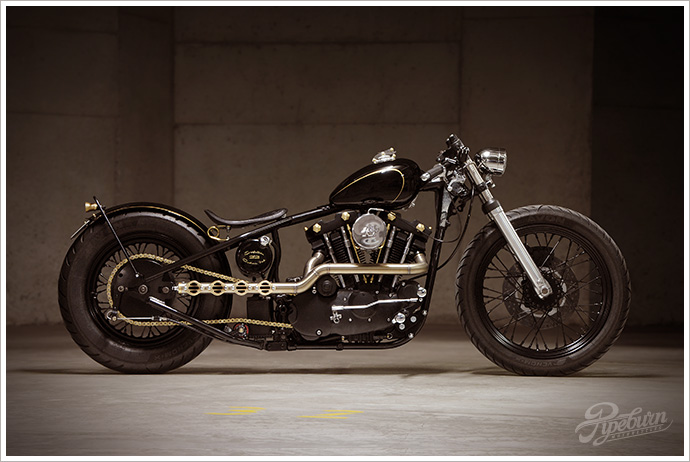 Ever get the feeling you’ve forgotten something? That horrible, smouldering worry that you’ve left something behind or forgotten to do something. I’ve had one for the past few weeks, and it’s been driving me crazy. I’ve been checking ovens, keys, wallets, and door locks like a mad man – all to no avail. Then, just when I’d almost given up hope of ever finding what it was I was missing, Paul McKinnon from Pipeburn’s local favourites Evolution Motorsports wheeled the bike you see before you into our basement garage for a photoshoot. Suddenly it hit me – I knew what I’d been missing all this time. Good ol’ fashion, hairy-balls-to-the-wall, down and dirty, blowing angry blue flames out of a red-hot exhaust cubic goddamn inches. It’s been light years since we featured some decent capacity, and I’m here to tell you that this oversight has now been corrected like a nuclear weapon corrects fine bone china with exactly one thousand cc’s of Milwaukee’s finest two-wheeled tractor goodness. Meet No.22. Over to Paul. “Dan came to me about a year ago and asked me if I would build him a hard-tail Sportster. A month or so later, he bought a ’73 (Oops. My bad – Andrew) Iron-Head Sportster and rode it around for a bit until he was ready to chop it up. His brief was fairly straight forward, a stretched out bike with clip-ons, or in other words a samurai chopper – the kind made famous by the likes of Zero and Shinya.” “He dropped it off with a hand full of stuff; an oil bag, hard-tail (we will go into that later), a milk chocolate brown blanket stitched seat with a maltese cross embossed in the middle, re-pop sportster tank, some pretty chunky and roughly made clip-ons, a bunch of bits and pieces and a rolling, half stripped bike.” “This one time, at band camp…”

“First up, I stripped it right back to a roller with a motor, pulled the forks out and set it up on the frame jig and cut the rear end of the bike off. I set the “bolt on” hard-tail up on the bike and discovered… it was far from bolt on! The hard-tail had been jig welded, which is a waste of time if you don’t control your welds.

The axle plates were 6mm out to each other and they hadn’t bent the top chain stays enough to allow the ends of them to be neatly welded to the top tube of the frame. I went about cutting it at a couple of joints to hopefully get it straight again… and I got lucky, the first joint I cut and the hard-tail made a “twang” sound and was straight. I put it back on the bike and welded it up. I had to make some fill pieces where the top chain stays meet the frame and add then I added dogleg seat stay tube to finish off. I also added a skateboard wheel to stop the chain from rubbing on the cross brace.” “Next, I cut and shaved the forks, taking 6″ out of the length and removing the fender mounts from the legs and spinning them round in the lathe. Now it was time to talk Dan out of that chocolate seat and the sporty tank. We found a re-pop Wassell and an embossed leather saddle from Rich Phillips. We then found that 7 Metal West had a fender that matched the radius of the rear tyre and went ahead and ordered it.” “Dan just kept bringing me more stuff, a nice brass LED tail light and a 4″ headlight… I just kept making brackets. The oil bag he originally dropped off didn’t work out, so Dan found one on the web.

We found that sweet Speedster gas cap and got it shipped, I cut the gas tank up to lower the tunnel, one to make it look neater (it had big gaps front and rear) and two, to get an extra litre of fuel inside, mounted the gas cap, then I went about fitting the tank to the bike.” “We got a set of forward controls and I cut them up and moved them back 120mm and 30mm narrower each side. I ordered a few stainless mandrel bends and went about making ‘the flute’ exhaust. I finished it off with some brass cnc’d grills and I machined a brass piece to plug the end and used it to mount the rear of the pipe.

Once all the hardware was mounted and all the useless brackets cut off the frame and unnecessary holes filled in, I stripped it down and sent it off for blasting and powder coating.” “We gave the motor a solid day of prep, someone had taken to it with a grinder to try and remove all the loose chrome (I saw it – the person who committed that crime is going straight to Harley hell – Andrew) We did what we could and then threw some matt black on it. I knocked up a set of clean and simple clip-ons up just in time to throw the forks in and do the final assembly of the bike. My good mate Kyle from Smith Concepts gave the tins a coat of black base coat, followed by some gold pin stripes and finished off with a clear flow coat. A couple of switches, a few wires, oil lines and a throttle cable and we were done.” “I would like to thank Dan for asking me to build this bike, I am grateful for the opportunity and I am very pleased with the end result.”