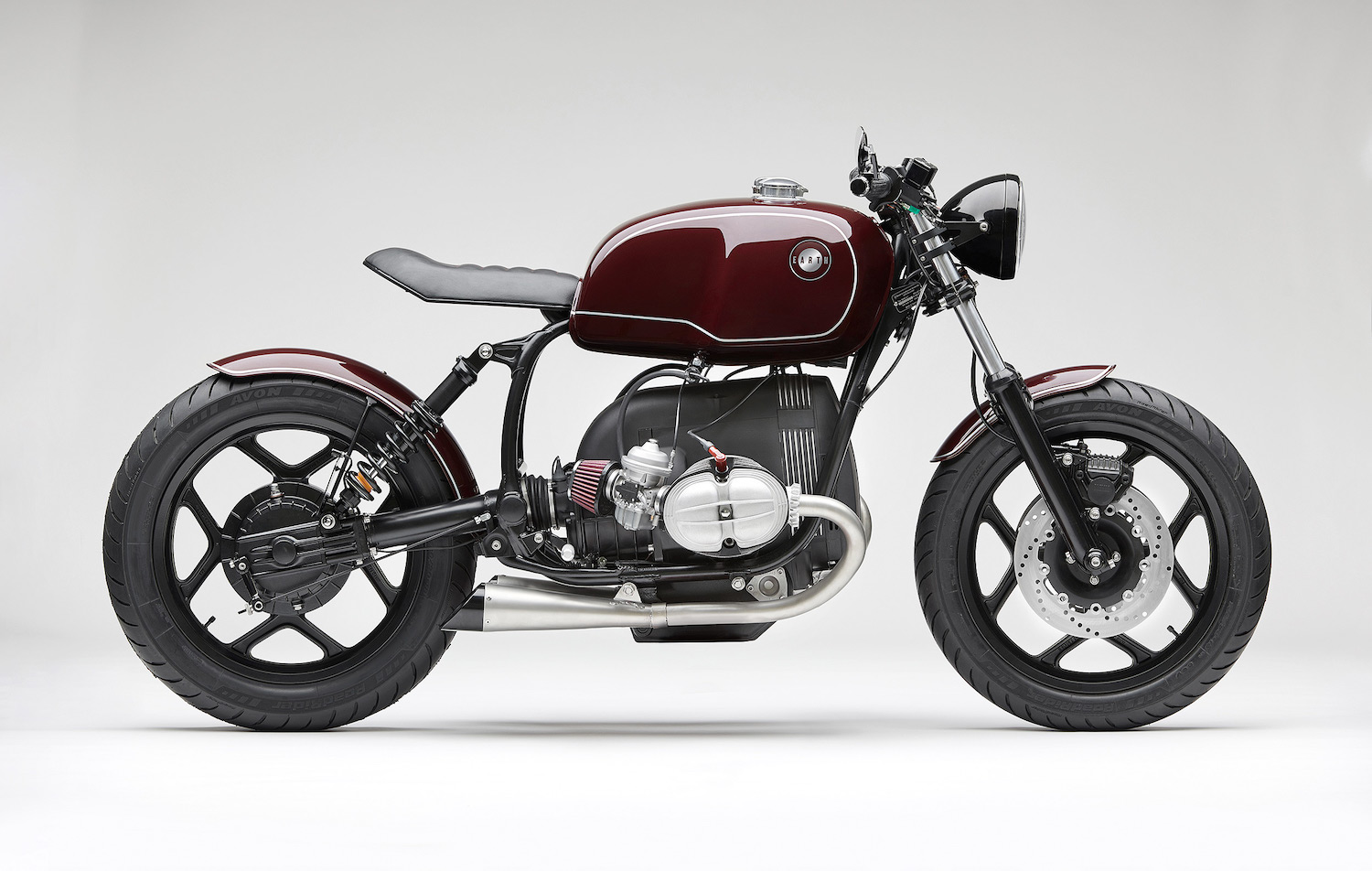 After the Treaty of Versailles barred Germany from developing and producing aircraft or maintaining an air force, Bayerische Motoren Werke was forced to pivot from airplane engine production to tap into a myriad of other emerging industries including building motorcycles. Within its first few decades of producing bikes, BMW would not only repeatedly push the envelope technologically and mechanically in the two-wheeled realm, but would also be responsible for penning some of the most iconic motorcycle designs in history with a steady stream of influential models like the R32, the R7 prototype, the R5, and the R68, to name only a few.

These designs have continued to resonate with new generations of riders and have more recently served as much of the visual basis for the Bavarian brand’s current popular range of Heritage models like the R nineT and the new R18 cruiser. Boasting a distinctive timeless quality, BMW’s earlier models from the manufacturer’s formative years are also the primary inspiration from the latest one-off work from Slovakian customs outfit, Earth Motorcycles; “Halier,” an early ‘90s R series touring bike that’s been stripped down and transformed into a minimalistic neo-retro homage to BMW’s two-wheeled offerings of yesteryear.

The idea behind the project was to deliver a more contemporary interpretation of the Roundel-clad bobbers from BMW’s first decades in operation. This would be accomplished by ridding the tourer of its bench seat and Vetter-esque bodywork to reveal its more traditional underlying BMW DNA in the form of the RT’s air-cooled boxer engine and steel double-cradle frame.

Based in a small town in the Trenčín Region of western Slovakia, just a short trek from the Czech border directly to the north, Earth Moto is a relatively small operation, though it nonetheless maintains some impressively high standards for overall quality, execution, and fit and finish. When the shop received the donor bike for the build—a tired 1993 R100RT—it quickly became abundantly clear that the 980cc twin was in need of a major mechanical overhaul, so the engine was pulled and cracked open, and the Earth team set about breathing new life back into the project’s powertrain.

The crew started by cleaning the engine inside and out until it looked like it did the day it left the factory in ’93. From there, the 60hp lump was treated to all new piston rings, valve guides, a cam chain kit, governor springs, clutch plate, stainless steel cam rod followers, a refreshed starter, a stainless steel choke system, a new engine cover, new NGK spark plugs, and all new fluids, filters, hoses, gaskets, grommets, and seals throughout. The donor’s stock Bing carburetors have been vapor-blasted and ultrasonic-cleaned before being paired with a new set of K&N pod filters.

With the engine out of the chassis, Earth Moto had the chance to shave-down, fully-detab the steel structure, and remove the entirety of the stocker’s subframe. In its place, the Slovenian shop has whipped up an ultra-thin 6mm up-kicked high-grade construction steel seat-pan that acts as the new faux black leather bobber-style saddle’s sole structural support element, while a small protruding tab now links the swing-arm to the frame via a blacked-out 410mm YSS shock, replacing the bike’s original dual-shock setup.

Out in front, the Beemer’s factory telescopic fork has been opened up and reworked internally in preparation for having the front-end shortened a full two inches, bolstering performance and giving the build a more modern and aggressive stance. The reworked fork is also now slotted in one-off triples with a machined billet aluminum top clamp, a custom stainless steel center nut, and new steering bearings. Finally, the touring bike’s center-stand was deleted, opening up space for the build’s planned exhaust setup and generally tidying up the bottom of the bobber’s silhouette.

To complete the rolling chassis, the RT’s wheels were given new bearings and then shod in tubeless Avon tires with new stainless steel stems. Before everything was pieced together one last time, the frame, swing-arm, seat-pan, wheels, shock, triple tree, and fork lowers were all professionally powder-coated in black. Prior to being shoehorned back into the frame, the reinvigorated boxer twin and its gearbox and transmission were also bead-blasted and sprayed with black Cerakote. The lump’s cooling fins were also polished and its cylinder head covers left bare to create a bit of visual contrast.

Earth Moto opted to retain the donor’s fairly contemporary-looking stock fuel-cell, though it too has been refreshed inside and out, having been professionally coated using state-of-the-art 2K technology and also now benefitting from new fuel taps, new seals, and black Cerakote paint. With its Roundels plucked from the tank, the eye is even more drawn to the build’s new polished Monza-style cap.

A classic round headlight shell was also chosen to keep in line with the antique Beemer theme while the LED-rimmed modern beam it houses adds a bit of blatantly modern flavor. In a similar vein, the bottom of the custom seat-pan is embedded with a tiny Highsider rear LED tail/brake-light that’s only 10mm in diameter, keeping the build street-legal without messying or cluttering up the ultra-tidy aft end of the bike.

Though the project may take ample visual inspiration from BMW’s Depression-era offerings, Hailer’s electrical system is entirely 21st century through and through. A renewed wiring harness now runs through a Motogadget M-unit Blue, complete with an alarm, smartphone connectivity, and an RFID keyless ignition system. Housed in a fire-retardant plastic box set in bespoke brackets under the tank is also a lightweight Aliant LiFePo4 14Ah battery.

The factory foot controls were also jettisoned to make room for new custom knurled items that were machined from billet aluminum. The rear brake pedal has been shaved down considerably and its reservoir and its routing have been discreetly hidden away, furthering the build’s immaculate appearance. What’s more, the RT’s also been gifted a hydraulic clutch conversion, stainless steel banjo bolts, and bleeders, Venhill hoses, refreshed and painted calipers, and new pads.

And while fenders often take a backseat to the rest of the bodywork on custom builds, that wasn’t the case when piecing together the Hailer, as these items shrouding the wheels would play a pivotal role in connecting its design to that of antique BMW models while also tying the entire build together and making it markedly more cohesive as a whole. As such, Earth fabbed up a thin, traditional item out in front that tightly hugs the tire and sits at a slightly notched-back angle, jiving with its new, more aggressive stance. In the rear, a one-off bracket now reaches up from the swing-arm and supports a larger rear fender that covers the back wheel from the 11 o’clock to 3 o’clock position—a clear yet modern nod to early BMW production bikes.

The last phase of the project would be laying down the RT’s paint scheme. Fearing BMW’s traditional black-based, white-outlined livery may be just a bit too on the nose, the Central European shop instead selected a deep burgundy hue that would still sport the Bavarian brand’s signature white pin-striping from its early days. Now adorning the fenders and tank, the new paint digs are the result of an involved layered 3D metallic application process that reveals its true depth when viewed in direct sunlight. The custom-upholstered seat also boasts matching burgundy accent stitching while custom-painted shop logos now occupy the empty recesses in the tank that were once filled with Roundels.

Brilliantly demonstrating the less-is-more build ethos, Earth Moto’s Hailer is undoubtedly one of the cleanest BMW’s to come across our inbox in quite a while. And though the project is a rather spartan affair, it’s abundantly clear that the Slovenian shop thoroughly calculated and considered each aspect of the build’s design, both with the parts by themselves, and how they relate to each other cohesively as a whole.

Since the completion of the build, not a single mile has been put on the entirely refreshed engine. That said, if you’d like to be the one to put some mileage on the odo of this extraordinarily clean 1993 BMW R100RT, the project is currently for sale in Stará Turá, Slovakia with an asking price of $23,250 (which includes free shipping to anywhere in Europe).