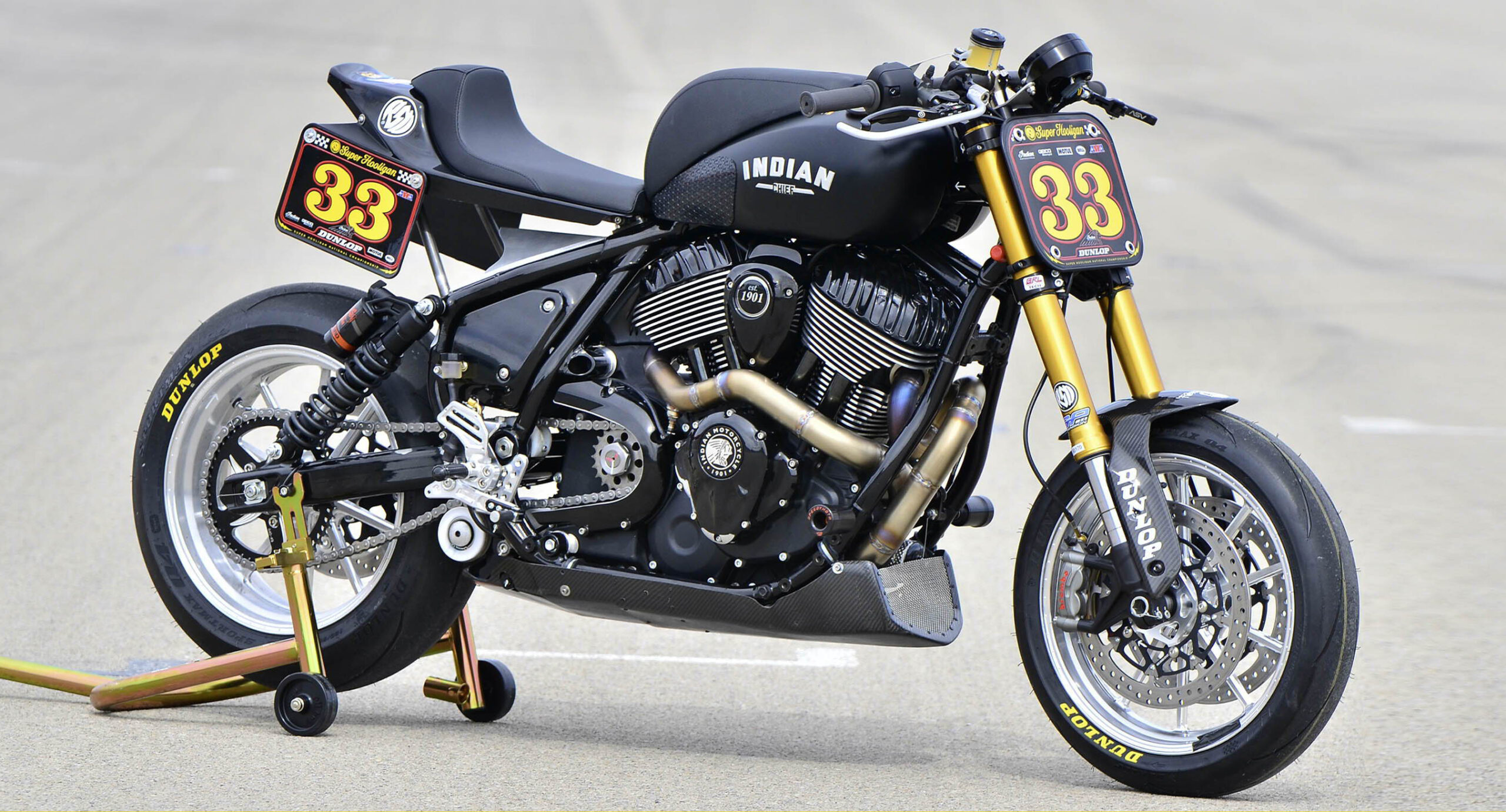 Back in April of this year, we were given an inside look at three custom builds of the all-new Indian Chief that had been commissioned by the American company. It was clear at the time that the new Chief was designed to return the cruiser to a more simple design and in doing so, allow customisers more freedom without the constraints that overly complex modern bikes often impose. We thought most builders would use the bike as a basis for bobbers and choppers, and they did, but Roland Sands has always been cut from a different cloth. He and his crew at RSD have turned the big Chief into a slimmed-down racer and they’re already winning on the track!

“The crew at RSD exists to explore the outer reaches of the two-wheeled world. Primarily turning crazy ideas into reality. The Indian Chief racer is proof positive that an abnormal thought process is not only interesting but also productive and pretty damn cool at the same time,” the guys told us. And it has to be remembered, that before Roland was a builder of custom bikes to the stars, he was a successful AMA racer.

With a brand new Chief rolled into RSD HQ, there was one very big and weighty issue that had to be addressed immediately. The Chief’s 640lb mass, and that’s without it holding any kind of fluids, not exactly inducive to carving corners on the track. So the big boy was put on an immediate diet and the team tore in, removing absolutely everything that the bike didn’t need for racing, and then some. Without breaking a sweat they’d pulled 100lbs.

Now they could get on with the task of getting the Chief race-ready and they know a thing or two about the task having produced an Indian Challenger for the King of the Baggers competition. “We used a set of FTR forks with reversed S&S triple clamps off our Indian Challenger bagger racer.” These not only give the team a far superior set of forks but allow them a level of adjustability to tune the suspension. For the rear end, a set of long Fox Racing shocks provide even more adjustability and the guys were on a roll.

What they weren’t going to be rolling on was the factory Chief wheels, heavy and in the wrong size, they turned to a set of RSD’s own 17×3.5 and 17×6 Assault Road Race wheels and then wrapped them up in ultra sticky Dunlop slicks. To stop the big girl at places like the entry to the corkscrew at Laguna Seca raceway, Brembo radially mounted calipers grab twin discs up front. With another important change coming in the way of a chain conversion to a 530 with a custom sprocket to get the gearing right and do away with the belt drive.

“We pulled the back of the bike off and replaced it with a Saddlemans seat and flat track tail mated to an adjustable subframe. Saddleman also fashioned a tank hump for knee contact which aided in keeping the rider attached to the bike.” A carbon fibre front fender and all-important belly pan to catch the oil should the engine pop, and with the race plates on board, the Chief was starting to look the part. Custom rearsets, in-house built bars for the job, and a set of Spiegler brake lines all give solid control to the rider.

But Roland also wanted them to have more power on tap and a big bore kit from Lloydz Motorworkz certainly does that, with a new set of forged pistons, sleeved cylinders to suit, and a full gasket set. Back at RSD and chief mechanic and ultra-talented fab man Aaron Boss crafted a stunning set of stainless pipes to give the bike even more pep. With the engine tune done and everything given the once over, it was off to Miller Motorsports Park for the inaugural BRL Big Twin Class.

Piloted by Aussie racer Rennie Scaysbrook who lives stateside, all the hard work and his epic ability to race anything with two-wheels, earned the team the win at the chequered flag. But they’re not stopping there, with the winning shakedown giving them a bunch of ideas for the path forward. More power, bigger brakes, and a host of other changes are on the way.

And suddenly in the hands of RSD the Indian Chief, weirdly, begins to get the mind ticking over about what other big bruisers could be turned into race-winning machines; no doubt Roland already has those same thoughts taking shape as we speak.