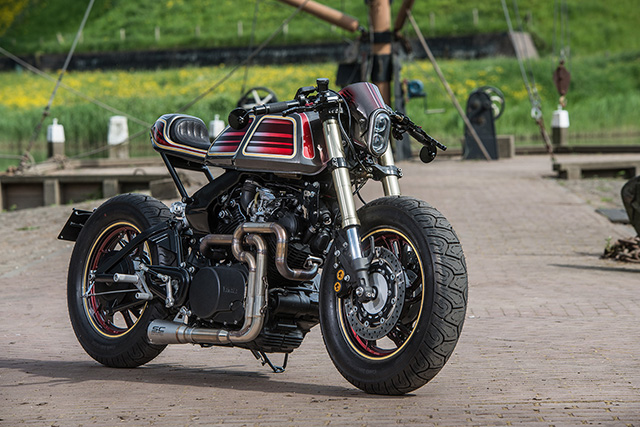 Building custom motorcycles allows for an immense amount of creativity and self-expression, though with so many new builds appearing each week, it’s become increasingly difficult to produce something that’s truly unique, thereby greatly mitigating the individuality aspect. When a concept has been employed by countless customs shops, the style becomes less representative of the builder and their tastes and preferences, and is hard to view as anything other than just more of the same. And it was this desire to create something thoroughly different that served as the core ethos behind the latest two-wheeled work from the Netherland’s Beekhof Motorcycle Builds. 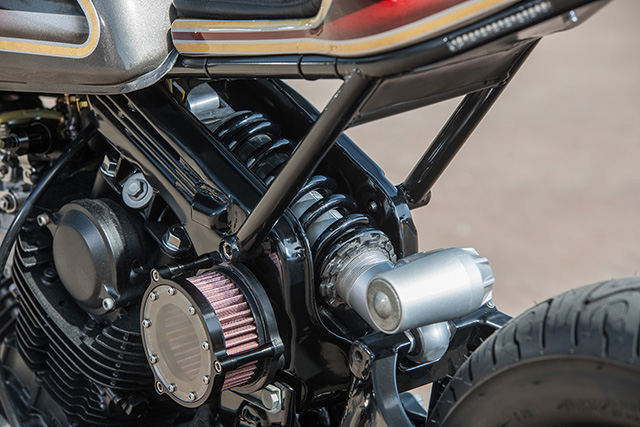 Founded in 2016, the Dutch customs outfit is headed up by Boaz Beekhof, who, after cutting his teeth in his teen years customizing and tuning mopeds, moved on to churning out full-size custom motorcycles under the Beekhof Moto Builds banner. “After building some custom choppers and bobbers, I wanted to make something different, so I bought a cheap Yamaha XV750 to start with. I honestly, hadn’t done much research into the model, but when looking around online I came across a shit-load of cafe’d XV’s, leading me to take things in a more novel direction.” Boaz tells us. 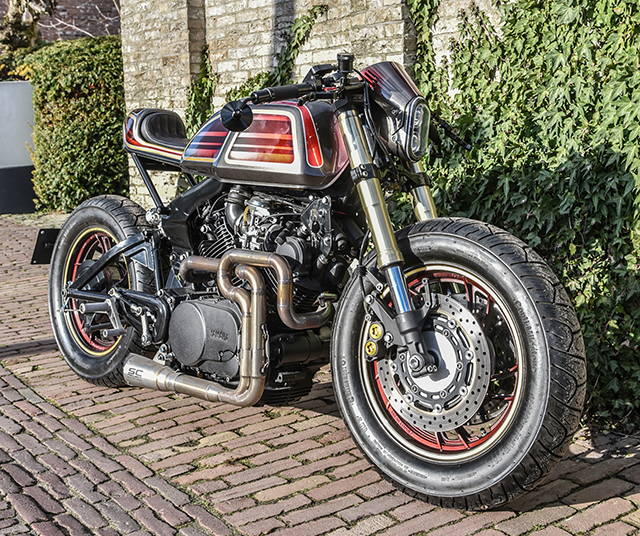 Wanting something more modern that would be unique and super clean, while still offering solid performance, Boaz ultimately settled on a cafe fighter. Though, with a relatively small budget and limited access to tools and equipment, Beekhof knew he would have to be creative. He started by stripping the Japanese V-twin down to the frame, before proceeding to pull the stock suspension and wheels. The original subframe was also hacked off during this same period. 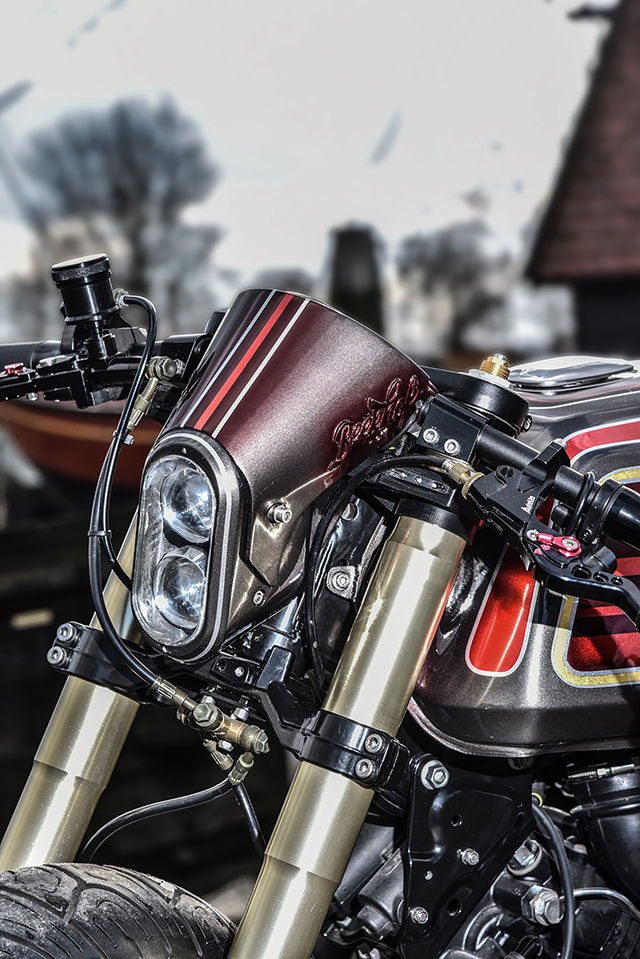 Bringing the XV’s handling into the 21st century is a beefy inverted front-end off of an R1, complete with a thoroughly-modern four-pot caliper and dual disc setup. Out in back, the stock mono-shock was swapped out for a modern adjustable unit that came off a late-model Kawasaki Ninja. “To get everything to work, I had to make a lot of parts myself in-house using my milling and lathe machine, and I had to modify the (front) rim quite a bit but I managed to pull it off,” gleams Boaz. 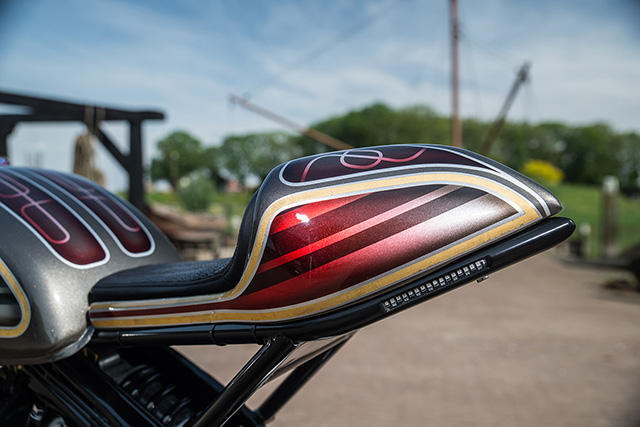 Steering clear of played-out custom practices, the Pinksterbloemstraat-based builder instantly knew he wasn’t interested in tacking on a traditional hooped subframe and instead selected a design in which the frame rails meet at a sharp, waspish point at the very ass-end of the bike. Horizontal sections on either side of the new aft framework were cut out to make room for LED strips that now serve as both the brake/taillight, and the rear signals. 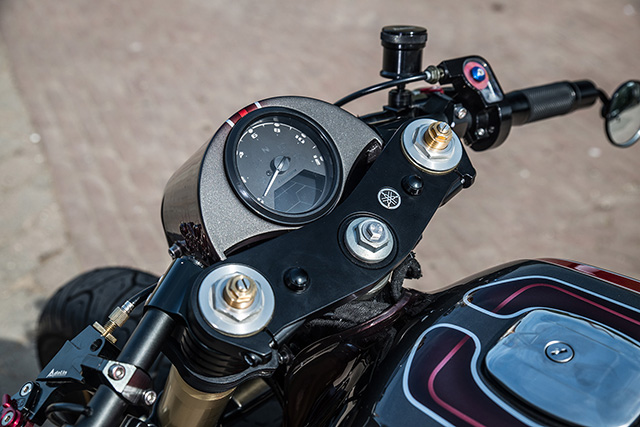 As a main focal point of any build, Boaz spent a great deal of time scrutinizing over the tank and mid-section of the bike. Wanting to give the thing a more muscular-look, he wound up selecting a larger tank off of an older Suzuki model, though with its knee-dents and tapering form, the cell lends itself particularly well to a cafe fighter-style custom, especially after Boaz made a few tweaks to it. “After modifying the tank, I found out there was actually a lot of usable space available, so I decided to stash the lion’s share of the electrical components in there,” explains Beekhof. 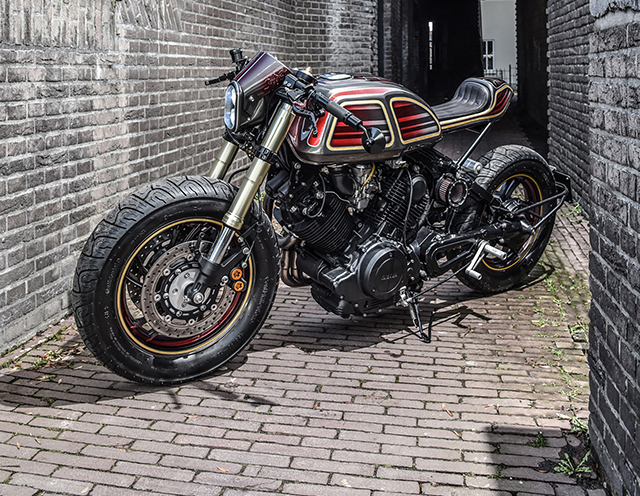 Next, Boaz shifted his attention back to the front-end. “The headlight arrangement on a cafe fighter is another crucial element to get right, and after not being able to find an existing headlight unit that I liked, I started drawing one myself. I then bought a 3D printer that I experimented with for a while before producing a handful of 3D-printed parts for the bike,” says Boaz. 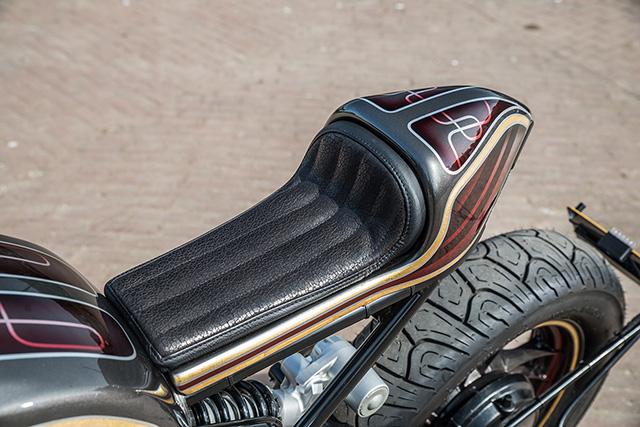 This includes the headlight nacelle, which also acts as a small windscreen and perfectly accommodates an aftermarket round tach with an integrated digital speedo. The 3D-printed piece also sports a heavily-raised “Beekhof” script badge, and the brackets used to hold the new stacked projector headlight setup were also modified and now house a trio of micro LED lights on either side which act as the front indicators. A number of other small parts and brackets were also produced using additive manufacturing. 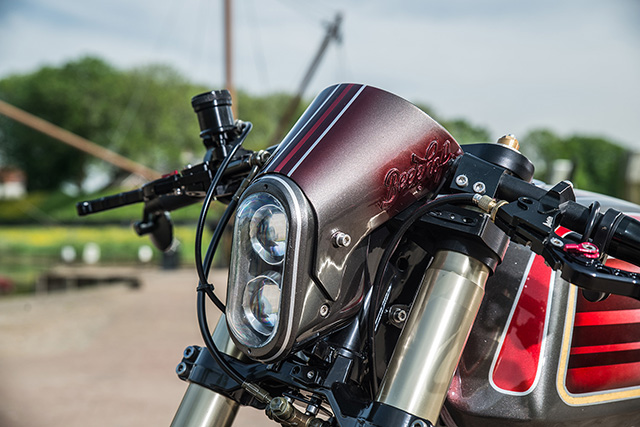 Nothing remains of the original rider’s quarters, with the bars having been replaced with a set of clip-ons that now sport machined grips, bar-end mirrors, and Adelin CNC-machined adjustable levers and master cylinder. And in addition to top-shelf GP-style switchgear on the left side, the Yamaha also boasts another two buttons discreetly set flush into the top triple. And rounding out the new rider controls is a set of machined rear-sets that, when combined with the new clip-ons afford the XV a markedly more aggressive riding position which is right in line with the cafe fighter vibe. 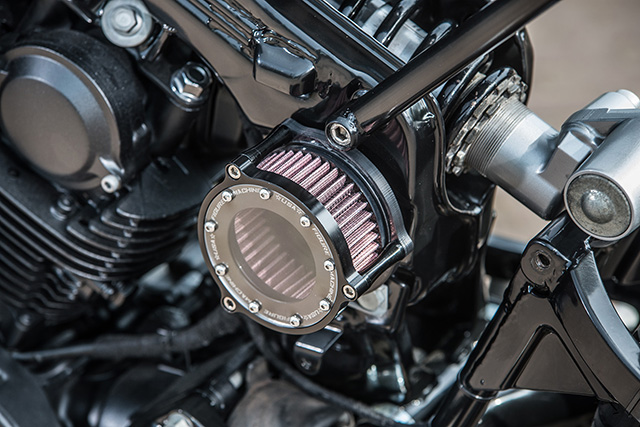 After receiving a thorough once over, the engine was gifted a new transparent Figure Machine air cleaner, and a 90-degree-laden two-into-one exhaust — made from over two-dozen hand-worked sections — that was originally capped off with Toce muffler tips, but has since seen the black slash-cut item replaced with a low-slung SC-Project can. “I’m well-aware that this style of exhaust (routing) on an XV has been employed on tons of other one-off builds, but still, in my opinion, it’s just a beautiful exhaust design, so I made one myself from scratch,” says Boaz. 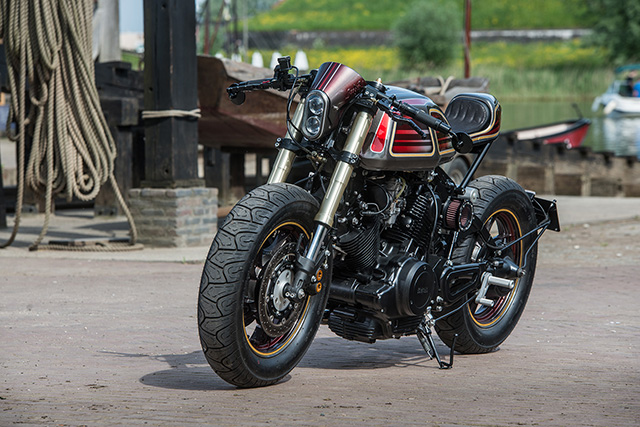 The new tail section was another challenge Boaz faced himself in-house. After mocking up a design in modeling foam, the final piece was created and then dropped into place. For the seat, Beekhof called upon Marcel Miller of MillerSeats to whip up a one-off saddle, resulting in the lined, reptile skin-esque unit that now adorns the build. “After seeing the bike, my girlfriend said it looked like a turtle on steroids, so I ended up naming the bike “Raphael” after the sai-toting red Ninja Turtle,”  relays Boaz. 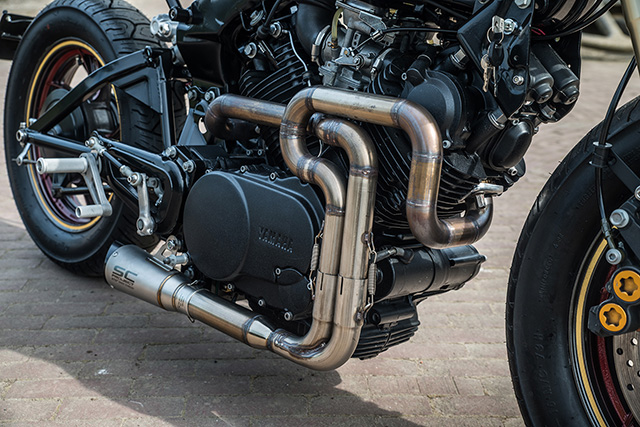 With everything else in order, Beekhof turned the XV over to his pal, Jacco from Royal Kustom Works, who laid down an elaborate, multi-layered and striped livery, with a burgundy base coat decorated with brighter hues of gradiated red,  and gold outlines and pinstripes — furthering the red Ninja Turtle theme. Now shod in ContiMilestone (Continental) rubber, the stock wheel have also been repainted in a matching burgundy with gold perimeter striping, too. 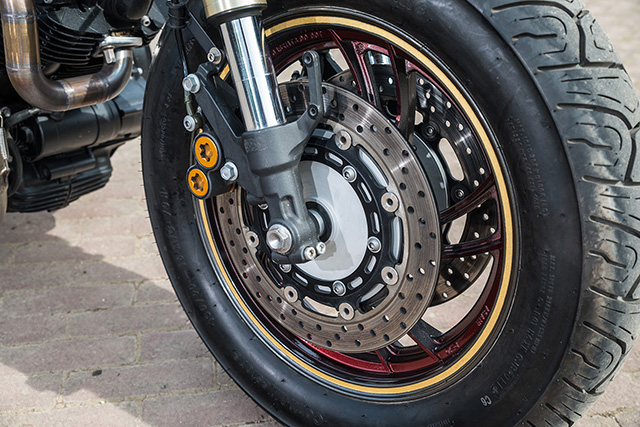 While there’s no denying that Beekhof’s latest work isn’t for everyone, it is hard to argue that Boaz didn’t succeed in what he originally set out to do; turning a once-tired three-quarter-liter XV into an aggressive, high-performance street racer with subtle nods to both the cafe and chopper genres. The integrated lighting and controls also allow for a remarkably tidy build. And, at the end of the day, Boaz couldn’t be happier with his latest work, and in our book, that is what custom bike building is all about. This is one young builder we’ll definitely be keeping an eye out for in the future. 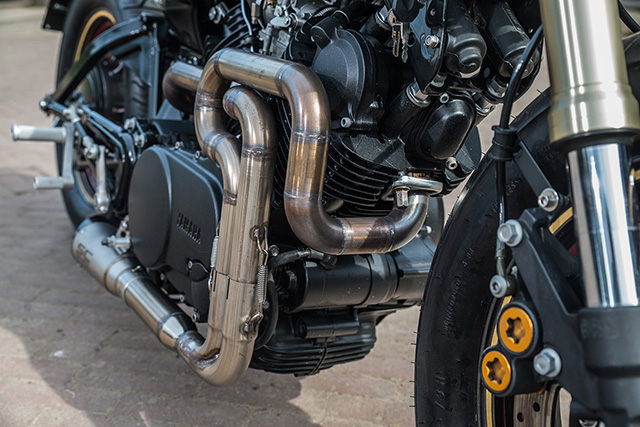 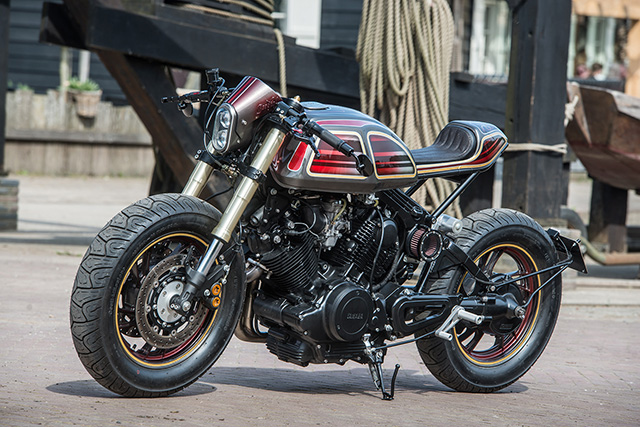 [Photos:  Sik Bloemsma from 13 and a half Magazine & Floris Velthuis from Bigtwin Magazine ]