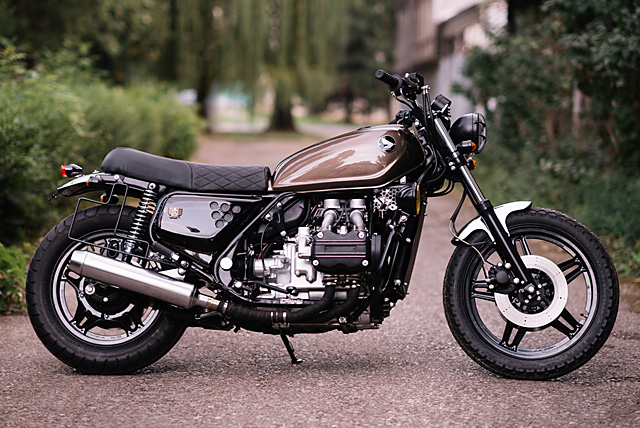 In case you haven’t noticed, we’re pretty keen on the old motorcycles here at the Chateau du Burnt Pipes. So us telling you how we like one particular model of bike over another is tantamount to the chubby kid with chocolate all over his face telling you how he much prefers Mars Bars to Snickers. But with that said, you’ve got to admit that there’s a certain something about Gold Wings. Their unique engine. Their ‘Americanese’ East-meets-West design. Their relative scarcity. It all adds up to something that really pushes our buttons – and those of Retro Bikes Croatia, too. Here’s Zeljko, the shop’s owner, to walk us through just how this chocolate-coloured delight came to be. The bike started life as ‘81 model imported for the German market; it still had all the original German stickers on it, which we thought was pretty cool. We purchased it in neighbouring Slovenia and it was rideable, but in need of a good service. We always wanted to build a 4-pot boxer Gold Wing and the asking price was fair enough, so we took it without too much hesitation. These bikes are super rare to find over here, and the ones that are offered for sale are extremely expensive. The bike had to be rebuilt from scratch, because pretty much everything was ready for servicing, but it started and ran. In case you didn’t know, these machines have a reputation as super strong and very reliable, so no matter how scare the maintenance has been, they are usually pretty safe bets.

We wanted to give it a more retro, old school look to get away from that original ‘wannabe Harley’ design with the high handlebars and low rear end. And considering that these bikes are getting more rare and hard to find, we wanted to do all the work without cutting the frame. So the beauty of this build is that the bike is not detabbed at all, and everything is reversible. We started with the suspension. The stock air-assisted suspension was very soft and, like on most of them, leaking air. So the decision was made to ditch it and go with some classic suspension parts. Of course these bikes are pretty heavy, so we had problems finding a suitable rear suspension setup. The shocks had to be strong, but the required length was quite different when compared to most stock sizes. We also wanted to lift the rear end a few centimeters to get the stance we were after. After much research, we ordered a pair of custom Hagon units built to our specs for the rear, and a set of Wirth progressive fork springs in front matched with CNC machined fork caps to replace the stock ‘air valve’ ones. The front forks were also completely overhauled with new oil, seals and wipers.

Then came the seat. Considering the new (and taller) rear end, we made a fresh seat base and a seat, fitted a chrome fender and fabricated a one-off side bag carrier. It’s quite a simple design, and it’s easily removed when not needed. The seat is an original design in genuine black leather with brown stitching. We like to keep some usage marks on all our builds (we call them the war wounds) so the bike keeps its charm and authenticity. To this end, we installed a pair of used chrome fenders from another bike instead of using the plastic originals or buying new ones. The bike had 60,000 kilometres (37,000 miles) on the clock, which is really nothing for these tourers. The engine had few gasket leaks here and there and the carbs were leaking fuel. All the signs pointed to the mileage being real; it really looked as if no one had opened up this engine before. We were pretty amazed, actually.

This is a boxer engine with liquid cooling and it has to have a reliable cooling system. So we changed it all, from the sensors to the thermostat and thermoswitch units, to the new silicone hoses, the all-new gaskets, the o-rings and the new water pump. The engine also went through a complete overhaul with its heads machined, valves lapped and seats cut. A full Vesrah gasket set was then installed, making sure there were no leaks anywhere. And while we were in there, all the components were checked for wear. Whatever had to be replaced was done so with OEM Honda parts. Timing belts are crucial on these bikes; they can make a big mess and a huge hole in owner’s wallets if snapped. So new ones were freshly installed despite the fact that the old ones looked pretty good. Finally, the outer surfaces were painted in OEM spec, high temperature paint, so it all looks as good as new.

Then came the carb setup. The Gold Wing units are huge (around the size of a 200cc engine) and they were leaking like sieves. So new membranes, jets and o-rings were ordered and the carbs were fully dismantled and cleaned. It wasn’t cheap, and it’s really tedious work. Honda mechanics around here won’t do the job at any price and now we know why. The carbs work flawlessly now and happily there’s no leaks on our freshly painted engine block. We also fitted a pair of almost-new HD 1200 mufflers we had lying around in our garage so the exhaust now sounds wonderful, just like it should. The brakes were also completely overhauled with pretty much everything, including steel braided hoses, front and rear. We fitted a new front master cylinder pump as the original one leaked and had some kind of ugly ‘chopper eagle’ Honda logo on it, which we had to remove no matter what. New Dunlop tires were then fitted front and rear, along with all the bearings, bearing holders and grease seals. The rear shaft was also serviced and lubed, with its o-rings now changed. This model year has a 17″ rear wheel, so we had some real trouble finding a tire for it. In the end, we found only 3 available options and none were the more classic design we were after to match the front Dunlop Speedmaster.

The electrics were mostly rewired, with the ignition lock moved to new position on the right beneath the tank, together with the choke knob and a fog light switch. New front and rear lights were then installed, along with new blinkers, and the new right-side fog light you see in the photos. There’s a new (and modern) all-in-one electronic gauge fitted; it’s black and minimalistic when not switched on, and when you turn the key it lights up and gives you all the info you need. It’s fitted in a CNC-machined aluminium holder with two more warning lights, so it all looks tidy and neat. New LSL low handlebars were fitted out with black Biltwell grips to match the diamond pattern seat stitching. The original controls were kept, but freshly painted in black. The frame, wheels, fork legs and the swing arm were powder coated; some in gloss black and some in matte black.

The paint on the tank is a beautiful high gloss metallic brown, with black on the side covers and the tank’s mid section. This bike has a centralised gas tank, so the ‘tank’ above the engine is actually a false one that just hides the air box and electrics. It was really big and flat to look at when seated, so we decided to give it a more interesting design. We made some small openings for two VDO gauges right in front of the rider; one’s for temperature, the other one’s for fuel. All in all, we wanted to make it look like a classic – which is pretty much what we always do. I like to think we pulled it off. It looks stunning and it rides well too. That boxer flat four is a magnificent engine and now it’s ready for another few decades of strong running. The bike also has many smaller details, like the original ‘69 Honda logo on the tank and the yellow fog light. There’s many more, too. Probably too many to count. Hopefully the photos will tell more of the story.

It may be a pretty common bike in the US, but they are really rare on this side of the pond and quite highly priced as only a few of them are in good shape. It’s like new now and ready to hit many more open roads. And yes, the bike is for sale; reach out to us if you think you might be interested in being its new owner. Thanks.