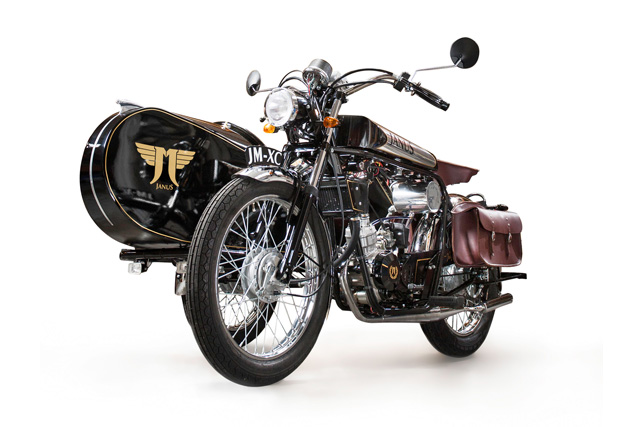 Over the last decade we’ve seen the return of the Café Racer, the Tracker, the Bobber, the Scrambler and many of the bikes that dominated the scene in days gone by. Now the renaissance is taking its logical next step, a return of the small motorcycle companies building limited runs of handcrafted motorcycles that mirror the customer’s desire for vintage flare. One such start-up is Indiana-based Janus Motorcycles who, in the spirit of Harley Davidson and Norton, are reviving the small to big approach with an unwavering belief in quality manufacturing. In the days of old, new models were often developed when a customer approached their local small manufacturer of choice and asked them to make radical changes to an existing model they’d seen out on the road. This is exactly what happened with the bike you see before your eyes. When a Janus customer approached the company with a desire to purchase the Halcyon 50 model, he added that he also wanted a sidecar version. Oh, and any chance of delivery in 6 weeks? As Richard of Janus explains, “we almost couldn’t believe he was serious… of course we took the project.” Immediately the team set to work. Knowing the extra weight would require more power, a 75cc Gilardoni cylinder kit was fitted and the 6 speed box gives plenty of ratios for various conditions. Given the short time frame for the build, it was decided it would be more time efficient to order in a sidecar frame and chair. Sadly not only did it arrive late, but it was also in terrible condition so the Janus team set about welding, machining and repairing it until what they had was perfect. The sidecar features a Janus fender, a machined hub that was laced up to one of their wheels and then a custom luggage rack to suit. The interior of the car is a thing of beauty; lush burgundy leather covers the seats and armrests as well as the saddlebags, solo seat, and battery cover on the motorcycle. While the carpeting is vintage automotive-style in a grey with black padded sidewall upholstery. Giving the car an almost 1930’s fighter plane feel is the custom aluminium dash complete with toggle switches for the auxiliary lights, interior map lights, and a cigarette lighter charging unit. While on the outside there are auxiliary fog lights, and a marker light to the front of the sidecar as well as an amazing old vintage horn that can be operated in tandem with the motorcycle horn by either the rider or monkey. While the customer also requested a hand-operated ‘roadbook holder’ which was sourced from Billet Innovations (Lawrence of Arabia, eat your heart out) and a fuel cap featuring the customer’s Flying Dutchman logo. The bike itself is primarily a standard Halcyon 50, resplendent in custom vintage styling wherever you look and how can you not love that tank; Brough Superior-style at a mere fraction of the cost. Some modifications were made to accommodate the sidecar including stiffening the front suspension and adding a steering damper to assist with the increased forces of the sidecar. But for the most part what the addition of the sidecar highlights is just how well Janus Motorcycles build their bikes in the first place; meticulous design, intensive R&D and exceptional bespoke manufacturing mean even such a monumental change to the bike was not a problem for the Janus team.

[superquote]“To the pub ol’ boy and give it the beans.
I fancy myself an ale or two…”[/superquote]

On the street Janus motorcycles already catch the eye; a far cry from the modern plastic adorned machinery that fills the traffic lanes, but with the addition of the sidecar. “Our bikes already attract a good bit of attention on the road, but it was unbelievable how much attention the sidecar got from both motorcyclists and automobile drivers.” And who can blame the passes by? It takes us back to simpler times of brilliant men in small workshops, motorcycle trips down country lanes and buzzing along in sidecar comfort. I can’t help but picturing myself turning to the rider and commanding “To the pub ol’ boy and give it the beans. I fancy myself an ale or two and this afternoon sun has me parched like Lawrence in the Arabian sands.” For Janus Motorcycles this is just the beginning. They’ve proven their wares and now the firm have two new models on the way, the Phoenix 250 and the Halcyon 250. Looks like the industry is in good hands and while everything that is old is new again, the future for Janus looks very bright indeed.