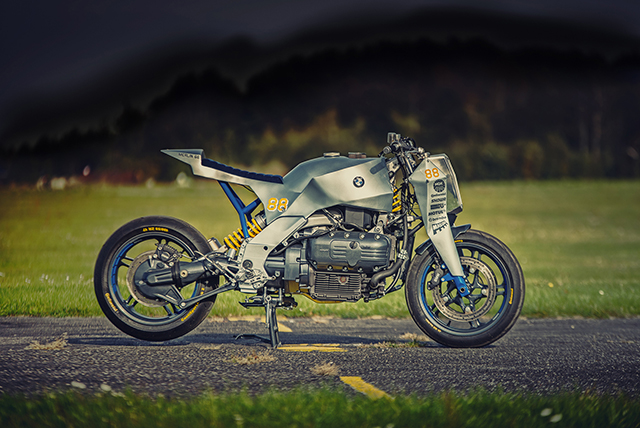 From Lennon and McCartney to Ben and Jerry, famous collaborations have brought us amazing music and made life that little sweeter. But while we enjoy the finished product, behind the scenes can be anything from blissful creative charm to all-out chaos. Thankfully when the founder of Ugly Motors Jakub Beker teamed up with a friend for his latest build they clicked from the get go and used their differences to create a masterpiece. From a tank like 2002 BMW K1200RS they’ve carved out a fast flying fighter in tribute to the legendary Mustang P51. 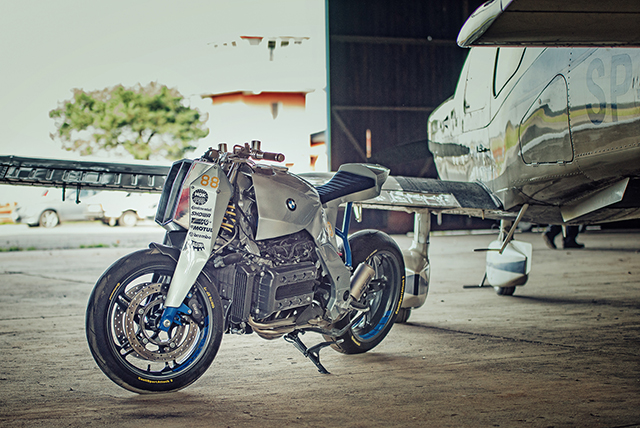 An IT professional by day, Jakub has spent the last few years turning out some simply beautiful classic customs from his workshop in Poland. But while he takes a traditional path with his own twist, his collaborative partner is very different, “more like a Bladerunner 2049 kind of a guy” Jakub laughs. Describing the process as “pure, helpless and slightly insane” they still managed to always be on the same page, knowing that the BMW would be the base and the inspiration drawn from a paper model of Mustang P51D made when Jakub was 16 years old and is now on his office wall. 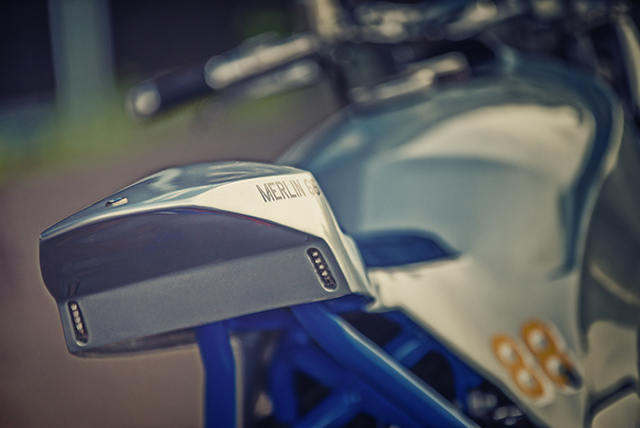 At first their search was intended to find a mint BMW K100RS, but donor bikes are not always the easiest of things to find in Poland and their efforts turned up nothing. The K100 they did finally find was a wreck and instead they stumbled across this much newer K1200RS, no big deal right, just a newer version. Well not really, it weighs over 600lbs all fuelled up and Jakub was quick to point out the other challenges “ Monolithic aluminium frame, telelever suspension, electric wiring straight from NASA and a visually-heavy brick in presence of a 1200cc oil-water cooled engine”. 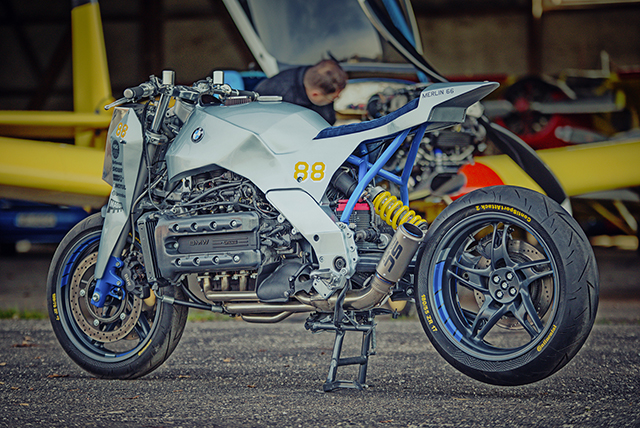 But it has some upside, in 1997 when first released the model was BMW’s most powerful ever motorbike and the boys decided to dive into the challenge. Back at Ugly Motors and they were stripping the big girl down, already fearing the wiring to be tackled later as more and more of it was exposed. But having never made a gas tank completely from scratch they decided this would be the time and to up the challenge it would incorporate the tail all as one piece. First Jakub took 4mm rod and created the outline of the structure from which to work. 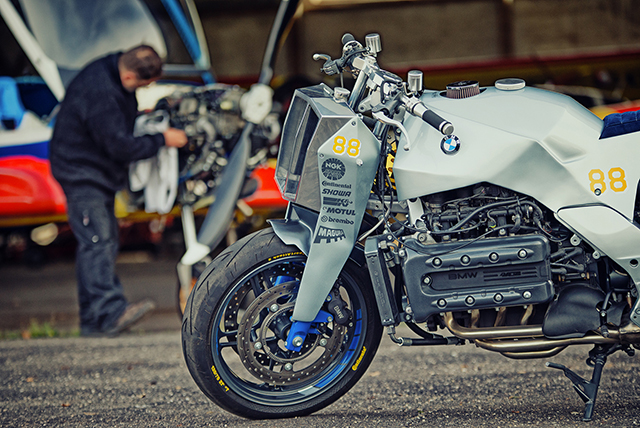 Then from a huge sheet of 0.8mm steel he began to bend, shape and weld and over more hours than he cares to remember it began to come to life. The design was always intended to be front-heavy, with the beefy round lines of the tank, moving to the sculpted wings, before flowing rearward to the slim lines of the razor sharp tail. Not only does it look incredible but serves many functions, “fuel tank, base structure, seat, electrics case and air intake for massive car origin K&N filter.” With an external fuel pump from a car ensuring the engine receives maximum flow. 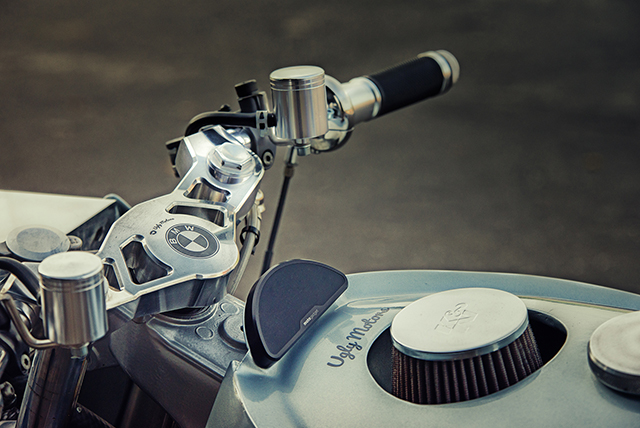 With his metal shaping skills in full flight, Jakub turned to the fork covers, “which only have one task, transfer the weight of the design to the front and add to the aggressive stance of the bike”. But sitting between them is perhaps the greatest achievement of the entire build and it started life as a 27kg chunk of aluminium. Jakub calls it the bikes ‘kidney’, housing the radiator where the headlight would be, that are now thin strips of LED, the feature dominates the front end. From a 3D design it spent hours in the CNC machine losing almost all of its mass until it was the perfect grille on steroids. 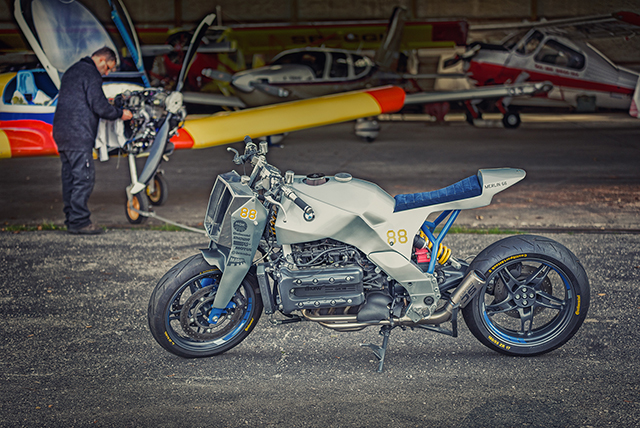 The triple clamps with integrated clip-ons followed a similar procedure, with the logos laser cut into the design. Now for the nightmare, dealing with the BMW’s truly insane wiring, Jakub decided a switch to Motogadget was the way to go, “I’ve managed to convert all the electronics and adapt this bike with M-unit blue (Bluetooth mobile connection), M-lock, M-button, Break Out Box B, Motoscope Pro.” While a healthy budget allowed for the purchase of Magura master cylinders and steel braided lines to complete the functional side of the bike. 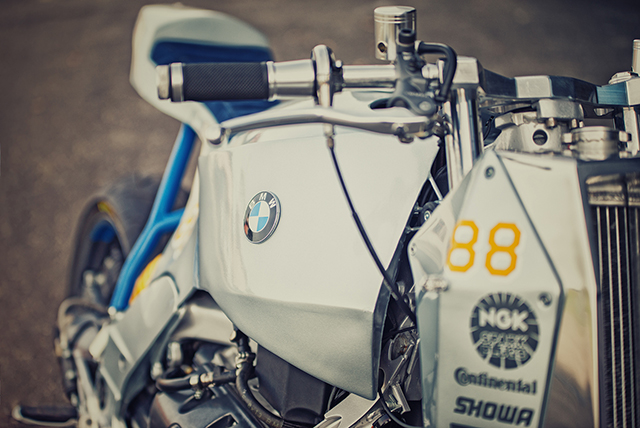 To give the big four cylinder engine some spice as its 130hp is unleashed the stainless exhaust is finished with an SC Project GP muffler for some of that ear-splitting WW2 fighter jet sound. But to truly bring out the Mustang in the project the paint and graphics had to be spot on and BMW Silverstone Grey with yellow and blue graphics to match the stunning seat bring the whole thing to life in a remarkable way. 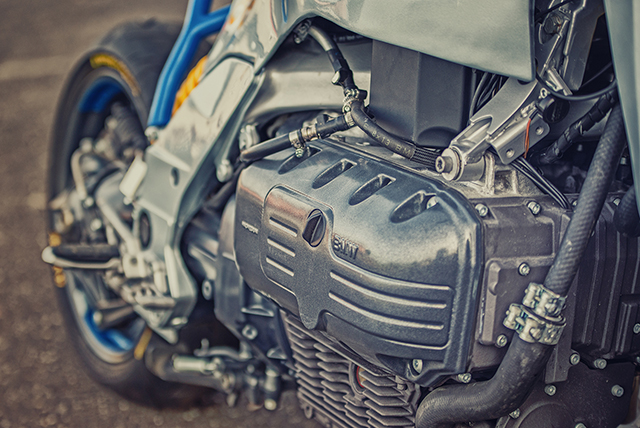 Jakub is quick to thank those who are part of the Ugly Motors family, Ewelina, Marek, Targal and Alex-CNC. But his final goal with the build is to ensure this is the bike you see when you type “custom K1200RS” into Google, job done! 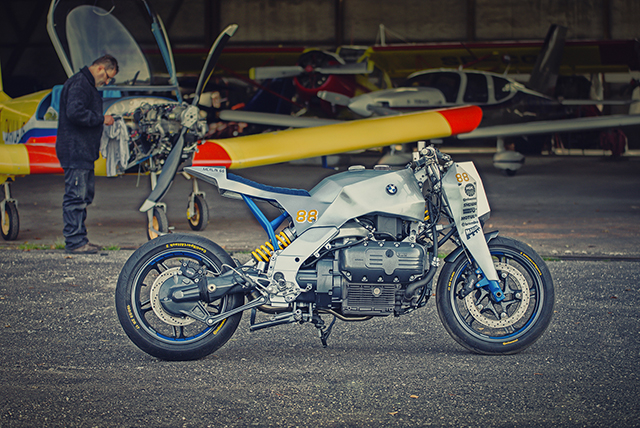 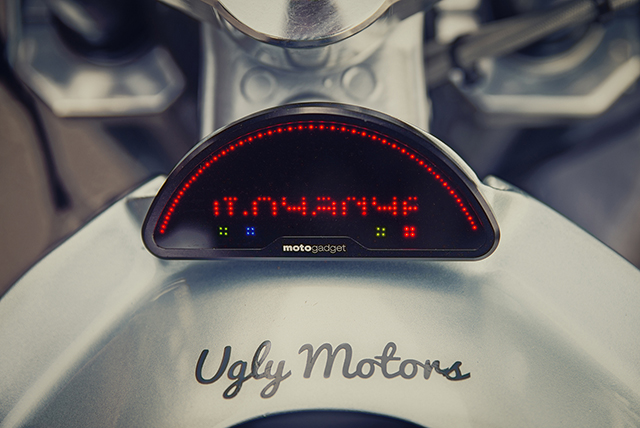 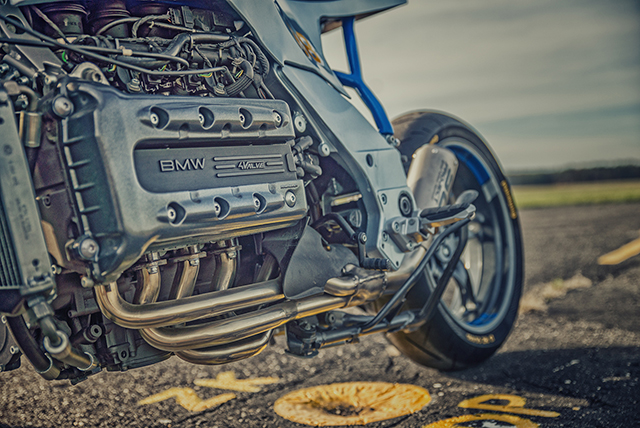 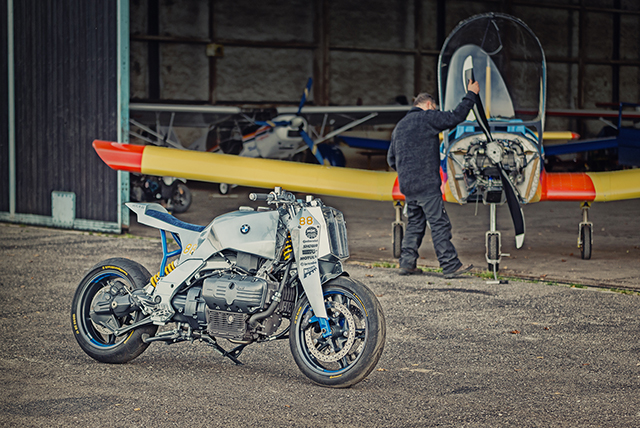 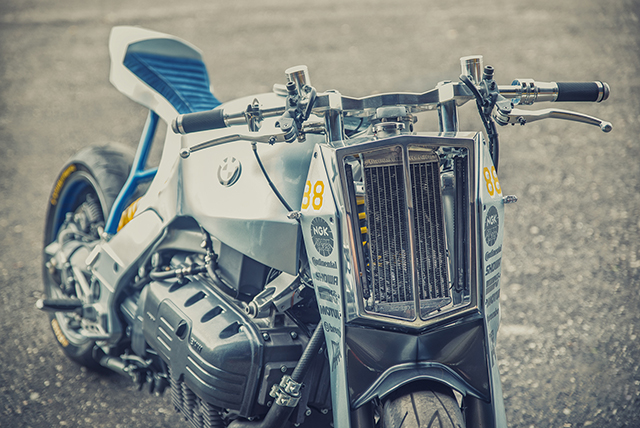 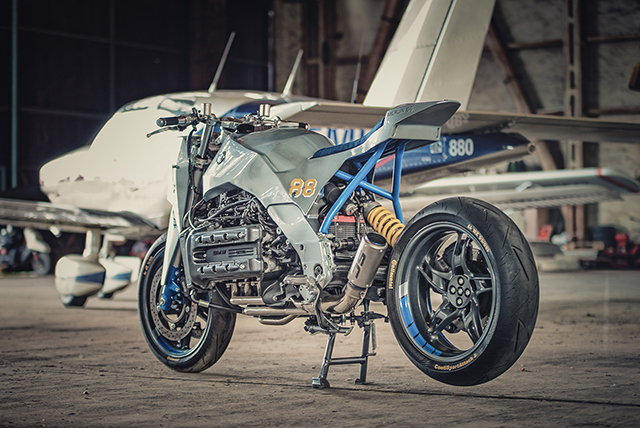 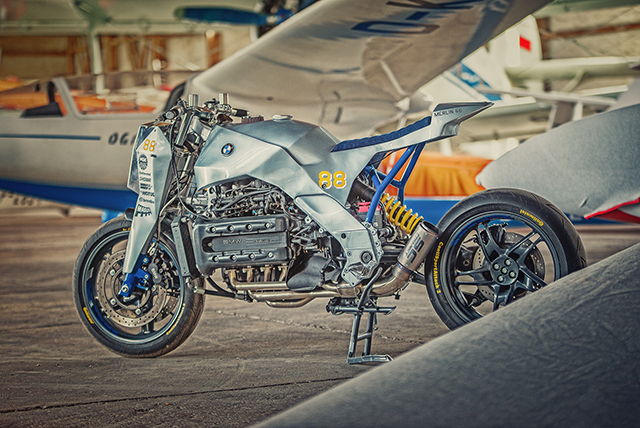 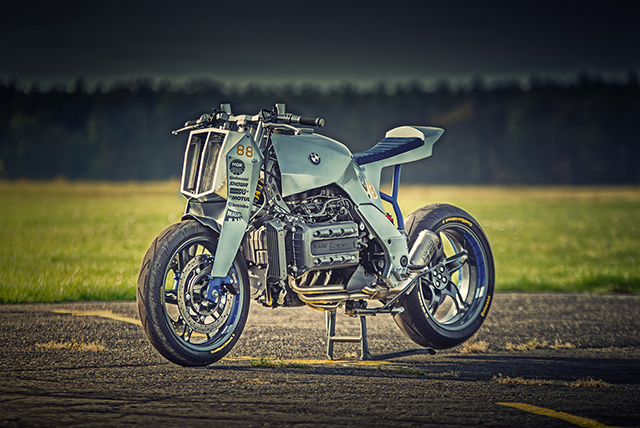 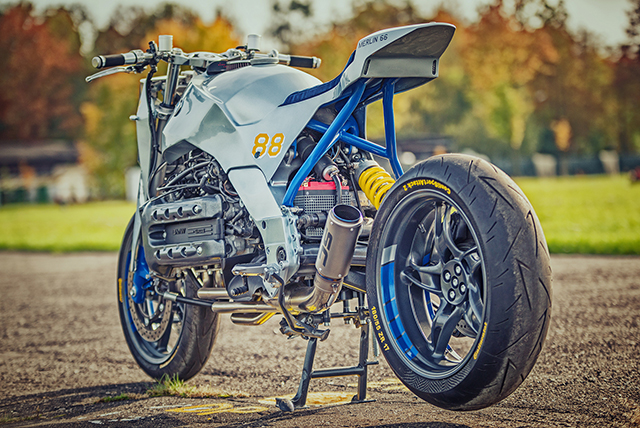 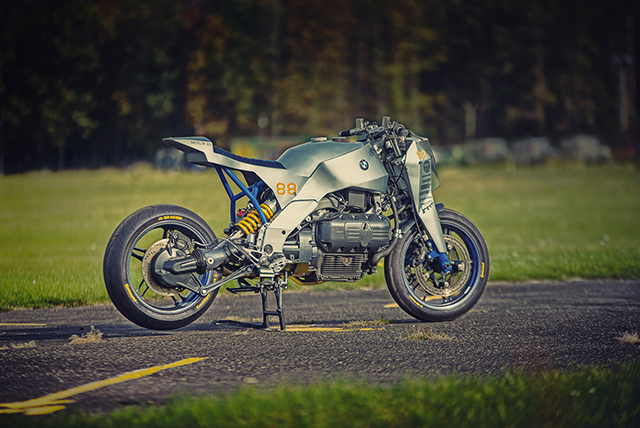