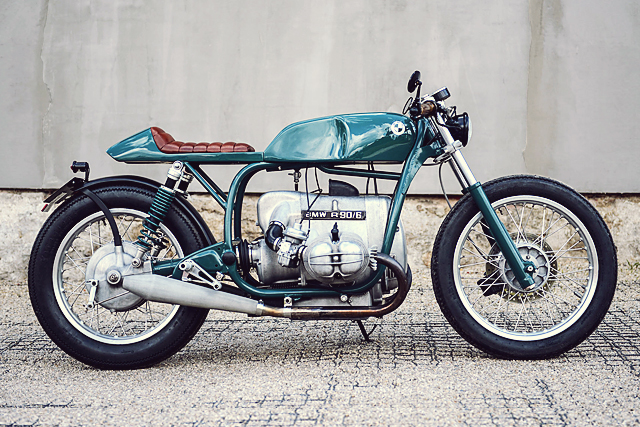 For more than a thousand years the Czech city of Prague has been one of the political and cultural centres of Europe, a thriving community of intellectual thought and creativity. So important is the city centre and its ancient buildings that it’s listed as a World Heritage Site by UNESCO, an honour normally reserved for single structures like the Taj Mahal or natural wonders such as Uluru. The first criteria for such a listing is that the place “represents a masterpiece of human creative genius and cultural significance”, so you could hardly ride around the place on a plastic fantastic 250cc number and be doing the city any justice. Instead the appropriately named Custom Culture Co. has taken a 1974 BMW R90/6 and with their own artistic creativity crafted a classic ride to cruise the cobblestone streets. Just like the incredible pieces of art on display in the city’s National Gallery this CC’s chef-d’oeuvre has an equally impressive name, Frau Turkisblau! Custom Culture Co. (or CC for short) is the brain child of Mark and Viktor from Prague who are not only neighbours but riding buddies with Bohemiantonup.cz. With more than a few projects on the go between them they decided to set up shop and start producing bikes for customers as well. But they made one very wise decision, although more than capable when getting grease on their hands, they are designers first and foremost so have enlisted the skills of mechanic Jakub Vetesnik from Riegl Moto to help with wrenching and fabrication. Now onto their fifth customer bike it was time to get creative, “The idea was to create a pure motorcycle, a bit different from all the other café racers built from BMWs. The design did not have a very long gestation, it almost came out of the first sketches and the client bought immediately into it.” What’s clear from the first glance of the photos is the emphasis on a classic design, with a single colour used almost exclusively across the build and no modern extras bolted on for the sake of it. With the frame separated out it was cleaned up, de-tabbed and sanded back to the bare metal so any battle scars could be smoothed out. The rear subframe was removed and a new item fabricated that supports not only the seat but also the very rear of the tank for a uniform fitment of the body work. Shock mounts were added to the new subframe and with the height adjusted the boys set about working out a rear guard. Rather than mount it underneath the seat they’ve gone the extra mile with a stealth looking item that closely hugs the rear tyre, is mounted to the swingarm to maintain the constant close gap and finished in matte black is the perfect example of functional minimalism. Then it was time for Jakub to put his exceptional fabricating skills on display with a custom set of tins for the bike to transform its appearance. But rather than go bold the look is about classic clean lines that could have come from the Bavarian factory if they’d produced a factory show stopper. The Aluminium tank is based on the stylings of the original unit with the overall dimensions much slimmer than stock and the knee dents in the same location but far more aggressive. To match he then got to bending and shaping alloy sheet for the integrated tail unit and seat pan that is crafted into a single solo racer vibe including rear tyre recess. Jakub’s bag of tricks wasn’t empty yet and the fuel filler is beautifully frenched into the top of the tank and the hand stitched leather seat millimetre perfect in the way it conforms to the tail pieces metal work for a perfect fit. The lower fork legs were removed, so too the rear shock springs and along with the frame and tins given a final sand before paint. Then the stunning turquoise paint work was laid down and keeping with the classic feel of the bike is done so to create an old school acrylic feel despite the use of modern materials. With the paint dry the lower fork legs were fitted back to the modified front suspension and the smoothed out triple clamps coated in a matte metal finish. To bring the body work parallel to the ground the rear end was lowered 10cm with the use of new adjustable shocks refitted with their painted progressive rate springs. With the hubs cleaned up and new spokes lacing them to the standard rims they could then be dressed up in vintage Firestone rubber and this is one machine that pulls off the looks flawlessly. With Jakub back on the tools the 898cc boxer twin is now as reliable as it was when it left the factory and with so much work on the aesthetics, greasy break downs can thankfully be avoided. The engine is essentially a big bore version of BMW’s 599cc unit of the time with the same 70.6mm stroke on both engines. The result is more power without compromising the ability of the engine to rev but it’s the extra torque and another cog in the box that makes all the difference. Happy that the engine was going to perform more than adequately for their client’s needs attention was turned to removing any clutter and unsightly wiring from around the block to allow it to stand out the way it should. It was then thoroughly cleaned rather than polished or painted for the off the show room floor look and new carb to airbox pipes fitted up. The exhaust has been simplified with the lengthy rear cans replaced with more classic items that have brilliantly been painted in a matte metal finish to match the engine. Wanting to maintain as much of the clean look they created as possible the stock wiring loom was drastically thinned out to the bare essentials and where possible replaced with the ever popular Motogadget products. Starting with the all-important M-Unit it runs a connection to the Chronoclassic digital speedo/tacho and digital ignition. The new clip-ons further reduce the overall height of the visuals and have been fitted up with gum grips, M-Switch handlebar controls and finished out with Motogadget bar end indicators and mirrors. Up front the oversized chrome ring headlight has been tossed aside and is replaced with a bottom mount 12cm Bates-style unit. While the rear end features a classic tail light and number plate holder both in black fitted up to the stealthy rearguard. “Overall the idea was to have a simple, minimalistic bike, emphasising, what makes BMW bikes so special – the engine” and boy have the team achieved it, an exceptional effort so early in the life of their new venture. There is just one last challenge for the team at Custom Culture Co. and that’s getting the bike passed its roadworthy inspection under the increasingly strict Czech road laws, “Cross fingers for us as we really need to see it in the streets of Prague soon.” So if you are out there Mr Inspector, the classic bike world has spoken, poured some rum on the road, offered a blessing to the motorcycle gods, slipped a penny down our leathers for good luck and ask you to give Frau Turkisblau the approval she so fittingly deserves.