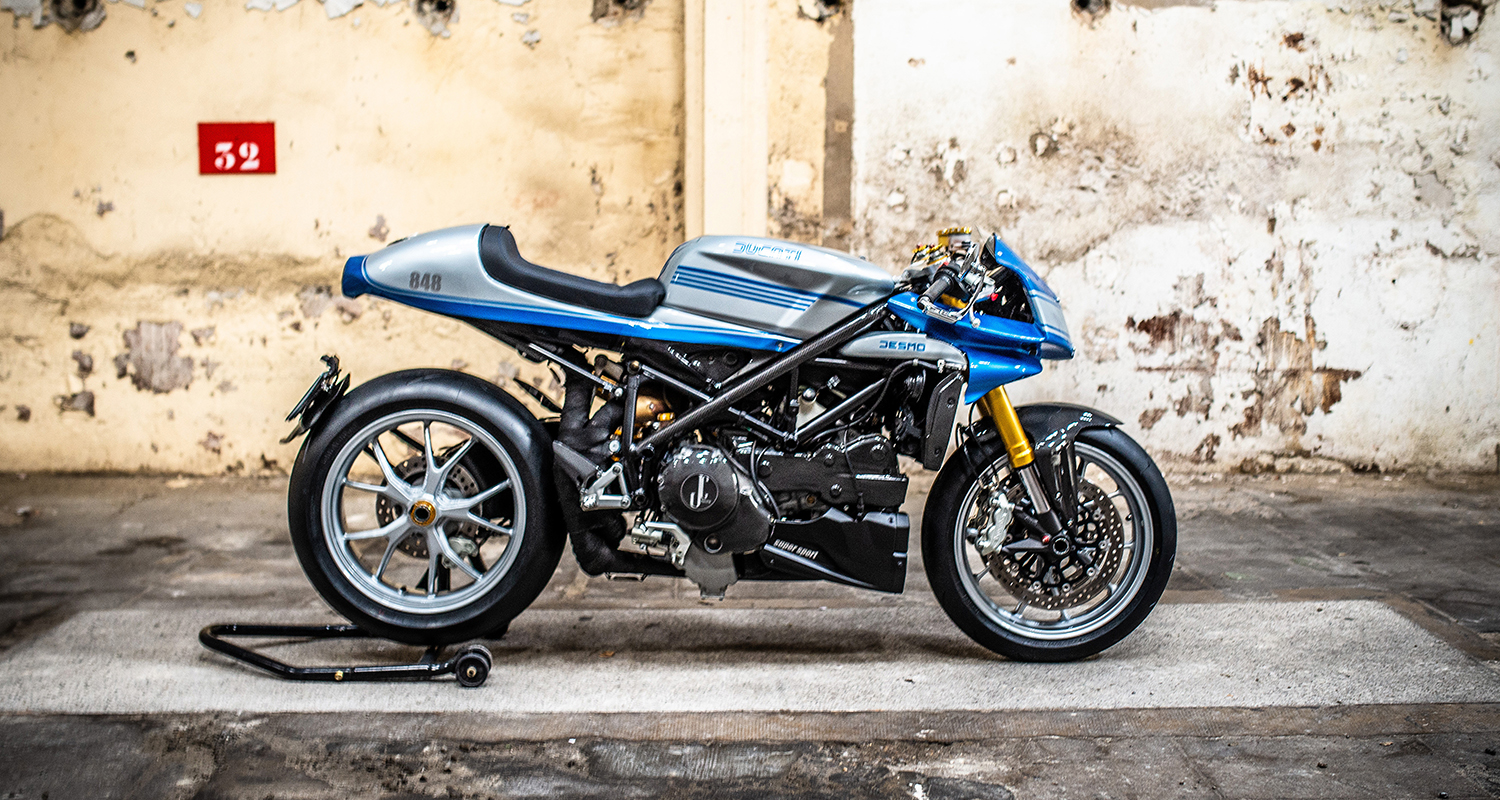 It was one of the most beautiful and sought after bikes of the ’70s and when an ageing Mike ‘The Bike’ Hailwood took one to victory at the 1978 Isle of Man TT, the legacy of the Ducati 900SS was set in stone forever. Hailing from Béziers, in Southern France, Jérémie Duchampt has always been a big fan of the Bologna brand. But what he felt was missing from the last ten years of the company’s line up is a bike that is a true modern-day grandson to that icon of decades before. So, if the factory weren’t building one, he would and under the banner of his JC Racing company he’s turned out this stunning 2011 Ducati 848 that is dripping with good looks and has the go to match the show.

It’s true that Ducati has kept the SuperSport alive for much of the period since that heyday, but today’s offering is not even remotely the company’s flagship and is instead designed to offer a “soft” entry into sportbikes. The same can be said for many of the company’s middleweight offerings, usually poorer versions of their big brother. But the 848 changed all of that, with the racing arm of the organisation Ducati Corse, heavily involved in the bikes’ development. Now more affordable as a second-hand offering, it gave Jérémie the perfect platform from which to build his dream.

Picking up a 2011 in the EVO spec (known in some markets as the SBK), upon its release MCN magazine simply called the bike “a masterpiece!” But having previously torn to pieces a stunning 1098, Jérémie is not one to get bogged down in sentimentality and got straight to work doing the same to the 848. Meticulous by nature, the parts were bagged up, marked as those that would need to be replaced, refurbished or set aside to sell. With the Corse designed frame left on his bench, he smoothed out any imperfections and removed the subframe.

The factory all alloy piece is actually a very nice piece of kit, but it wouldn’t work for what was planned and an all-new unit was fabricated to take its place. Painted up in black along with the frame, that was given a carbon fibre guard on the main rail, there was now the perfect foundation on which to build. Onto the main game and the bodywork begins with the front end from designer extraordinaire, Paolo Tesio, of Tex Design. From his ‘Road Rage’ package originally intended for a Monster, the front fairing has been reworked to fit the 848. With plexiglass cut to cover the headlight opening and form a small top screen.

The factory tank remains but has been body worked within an inch of its life to ensure it is of the highest of standards, and below the intakes are themselves smoothed out and grilled off. To ensure a seamless transition from the centre of the bike to that stunning rear end, Jérémie wanted it done in one piece with the exhaust outlet, extended taillight housing and tank matching lines all fully integrated. For the job he turned to experts in fibreglass, FF PRODESIGN, who specialise in making full one off bodies for the car world. This might be a much smaller piece, but the result is simply stunning.

To bring it to life the paint would have to be just as incredible and the bodywork was turned over to ANTHONY A2F who came up with a design that took inspiration from the 1975 Ducati SS colour scheme, with a hell of a lot more gloss and pop. He even took the time to do the script in that ’70s style for the logos and painted up Jérémie’s helmet to match. Putting the pieces back on the bike, the previously faired machine had other parts to cover and to achieve a uniform look carbon fibre was chosen, lots of it! From the front guard, to the swingarm cover and rear hugger, there are gloss finished pieces of the expensive material wherever you look.

To get things rolling a set of the lightest wheels from the line-up were selected and painted in factory matching silver. While the front Showa forks were rebuilt and anodised in gold before going back in the trees. Transforming the handling of the already brilliant steerer is a top of the line Ohlins shock that is dialled in for the rider’s weight. To further reduce the mass, the wiring was simplified, the lighting is all LED and the battery swapped out for a tiny lithium unit. With the big dorky factory mirrors given the flick in place of classically styled items that bolt to the ends of the bars.

Of course, just like the machine that inspired it, the 848 uses the famous L-Twin configuration for its engine, but the far more advanced Testastretta twin-cam packs a bigger punch with just a slight twist of the throttle thanks to a soaring 13.2:1 compression ratio. To free up some more ponies, the exhaust system was completely redesigned and with a small silencer under the seat, the outlet through the tail gives an ultra-clean finish. Heat wrap and more carbon were used to keep the rider cool and anyone who has ridden a modern Ducati knows your aggots will thank you for it. Always humble, Jérémie says JC Racing is still an amateur outfit, although you don’t need to look twice at this gorgeous creation to know the beasts that roll out from Béziers are anything but.