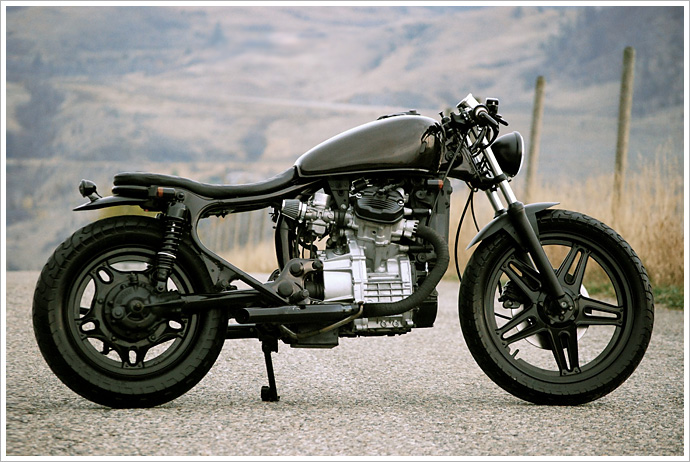 In my limited and very humble opinion, there are two kinds of Dads in this world; Dads who like motorbikes and Dads that don’t. And although I love my father very much and deeply appreciate his inherited love of all things mechanical, upon telling him that I’d decided to get a bike he told me he thought it was “a bloody stupid idea.” Ouch. Fast forward to now and the vitriol has settled to a feigned disinterest for the most part. And I say “feigned” because every now and then I see a dim twinkle in his eye as he asks me a question about shaft drive versus chain drive, or air cooled versus water cooled. It’s as if he’s holding himself back from getting enthusiastic about the machine because he doesn’t want to encourage me. Which, as a very long way around the block to visit your neighbour, brings us to Garret Dietz and his Dad. See, G’s lucky enough to have a Dad that falls firmly in the “likes bikes” pile. Hmmm. I wonder if he’d swap for a month or two? The time would fly by once he really got into my new build… Here he is, a guy we’d call ‘Deitzo’ in Australia, Garrett Dietz. “Ever since I was boy I have felt the need to be busy building things, I think it started with Lego. I have always enjoyed creating something from nothing and being able to look back on my work feeling a sense of pride and accomplishment and that is exactly what this CX500 was.

I hail from British Columbia, a province filled with some incredible twisty back roads and beautiful landscapes and it seems a crime to not feel the breeze on your knees. In fall I laid eyes on the Wrenchmonkees CX500 build and thought to myself… the perfect winter project.” “I finally found a CX worthy of the price (cheap) and drove to the coast to pick it up. It was ugly, and it had been neglected. I loaded it into the trailer and headed back home itching to get out my tools.

[superquote]“It became more than just a project, it was time with my Dad.”[/superquote]

Many nights were spent in the garage stripping the bike of its weight and old unnecessary components. As time went on my Dad spent more and more time in the garage with me. It became more than just a project, it was time with my Dad. Time to share ideas over a cold brew and work into the early hours of the morning.” “Without my father’s help, this bike would not be what it is. Sure it looks similar to the Wrenchmonkees CX, but this bike in my mind, is different. I do want to give credit to the Wrenchmonkees for their inspiration that lead me to build my first bike and more than that, for the time it gave me with my Dad. It is my everyday bike and it wont be my last!”