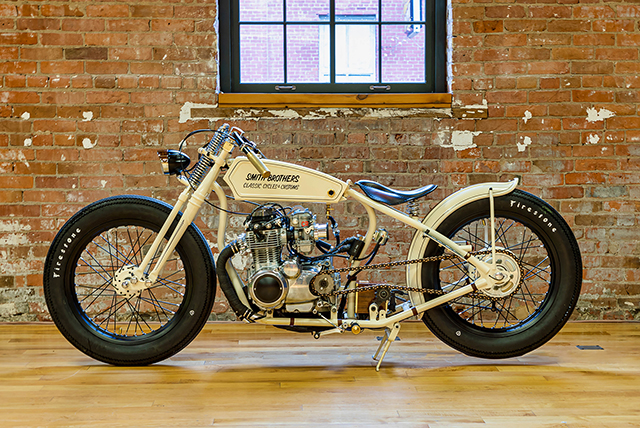 With almost any style of motorcycle there are different stages of customisation you can go to while still accomplishing a complete build. A race replica doesn’t need a 200hp engine and the very beauty of a cafe racer is only a handful of changes can get the job done. But building a board tracker is the exception, you have to go all-in or not at all. So when Chris Kent and the team at Iowa’s Smith Brother’s Classic Cycles & Customs decided to push their chips to the middle of the table they were committed to doing it once and doing it right. With the help of some of the best in the industry, the result is this beautiful 1973 Honda CB350F board track racer for the road. “The National Motorcycle Museum is about 20 minutes from my house and every time I go in there I find myself drawn to the display area of an original board track with the period-correct racers. This was a great source of inspiration and ever since I first stepped into the museum it’s been something I knew I wanted to undertake,” Chris explains. The more he thought about the project the more he realised a small donor bike for the build would keep the dimensions similar to the sleek and minimal look of the machines of old. 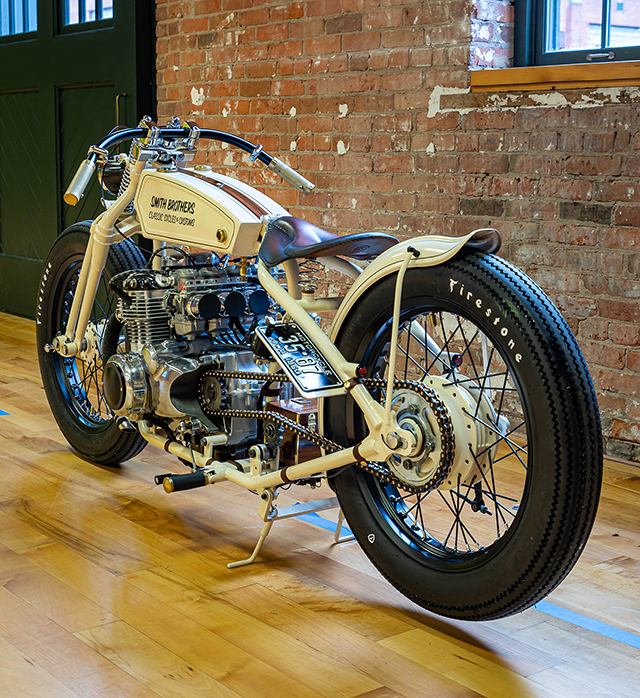 Thankfully one of the Smith boys had the Honda in the shed and it was soon up on the lift with the measuring tape being offered up. “Initially I was going to try and modify the original frame but once we had the bike stripped down it was obvious that was not a frame that would stand any chance of meeting the design without serious fabrication and at the point, you just as well start from scratch,” Chris told us. So having found some old frame designs the right fabricator was tracked down to make a custom hardtail unit, with a beautifully curved single down tube for a tight steering angle. 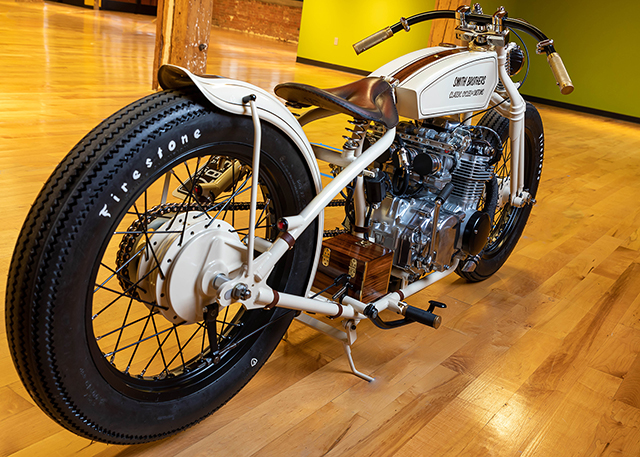 Turning it into a roller Chris selected a ’52 big twin springer front end with 19′ Excel wheels laced to the original hubs and Firestone Champion Deluxe tires. “Raised lettering on the Firestone tires isn’t something you can get from Coker but I knew that it had to be done and with a few hours to myself at the shop one afternoon, I reverted back to 4th-grade art class with my rubber tire paint,” he smiles. The bars were always going to have to be modified versions of another style and they started as 1” beach bars. But it’s the solid milled and knurled brass grips that hide beneath them a super trick element of the build. 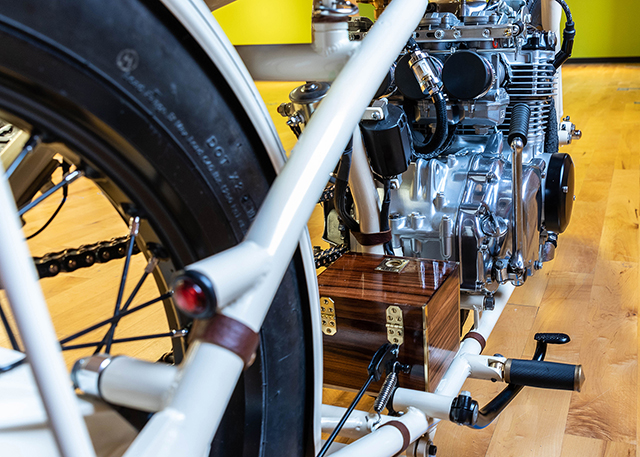 Wanting to keep things clean and have no levers at all the first step was to create an internal throttle, with the grips drilled and threaded to suit. Having seen Revival Cycles do similar things it was on a trip to Austin that Chris sat down with Alec to see if the other side could be done, “The take away for me in the conversation after I ran a few things by him was ‘ya, it can be done’. That was pretty much all I needed to hear. So, no clutch lever. I ended up doing an internal clutch mechanism similar to the internal throttle but with a steeper angle to better engage the clutch.” 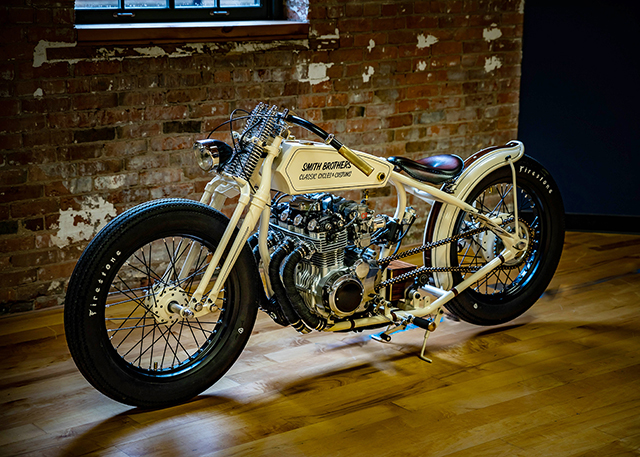 Now the all-important bodywork could begin, it might be minimal but it has to be bang on. So after Chris had a chat to a good friend and local artist Scott Takes at Underground Art Studios he mentioned a guy out West doing killer custom fenders, Joe Cooper of Coopersmithing Co. With Chris explaining his desire to incorporate a 1.5” wide strip of rosewood down the centre, Joe knew the solution lay in a double rolled bead. But bending the tight fibres of the wood proved more challenging, 5 days in the bath and it still wouldn’t budge. 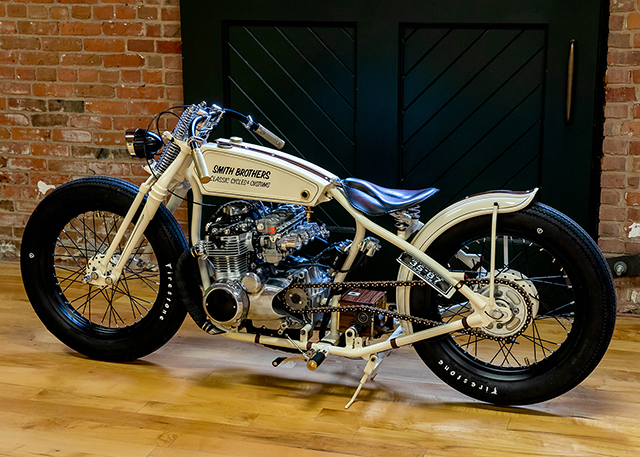 Luckily a regular around the shop is a woodworker who steam moulded it and added the brass rivets before he turned his attention to the stunning battery/electronics box of the same rosewood. Now it was time for the tank, “I spent no less than 25 hours mocking up different iterations and sketching out designs that ultimately paid off in the end thanks to our local metal magician Mike Frieden,” Chris says. Not wanting to go over the top with the paint, a single colour, antique white, was chosen. With pin striping star Hugh Hoffman taking care of the gorgeous detail work that has a true traditional feel. 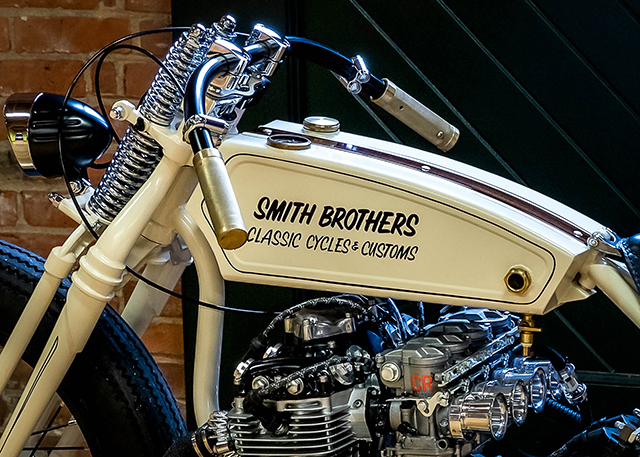 The engine was a good runner, but the stock carbs were never going to stay and are replaced with Keihin CR’s, while modern Dynatek electronic ignition handles the spark. The four individually wrapped header pipes with slash cuts deliver a booming sound and the wiring is well-hidden thanks to Motogadget’s minimalist magic. The spring saddle style seat is the perfect finishing touch, the old school leather matching the wood finish to a tee. There are simply too many other details to mention, Chris plans to shorten the cables over winter. But now complete the Iowa crew have crafted a custom Honda Boardie that wouldn’t look out of place where it all began, at the National Motorcycle Museum. 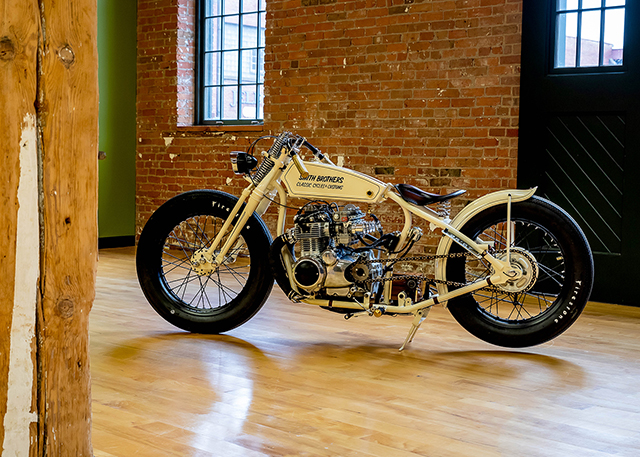 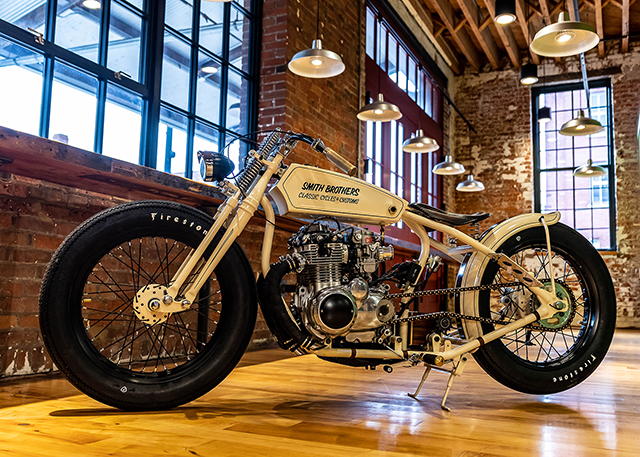 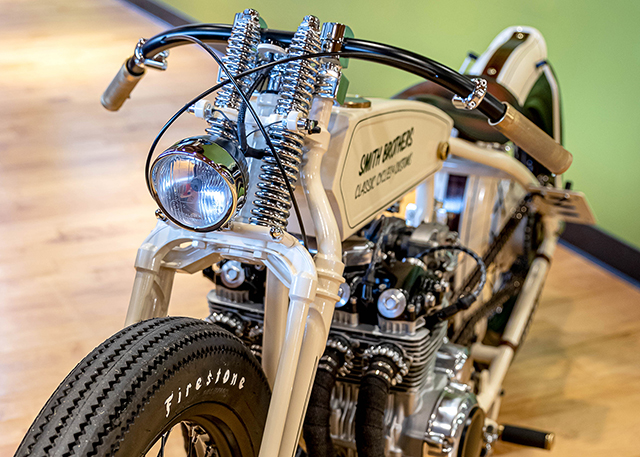 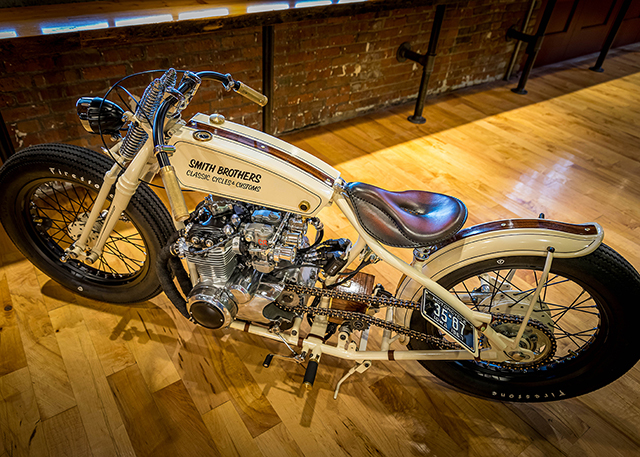 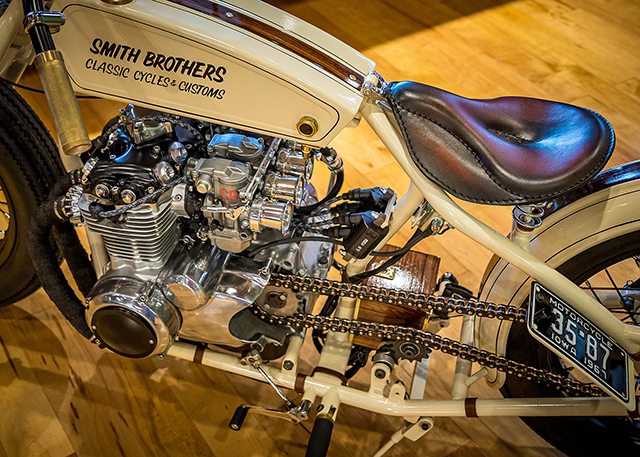 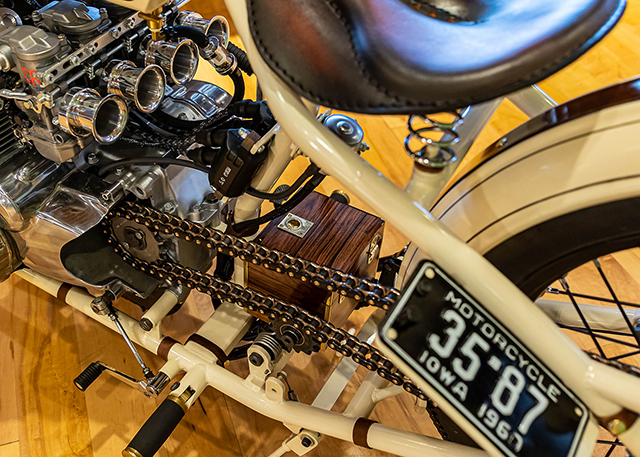 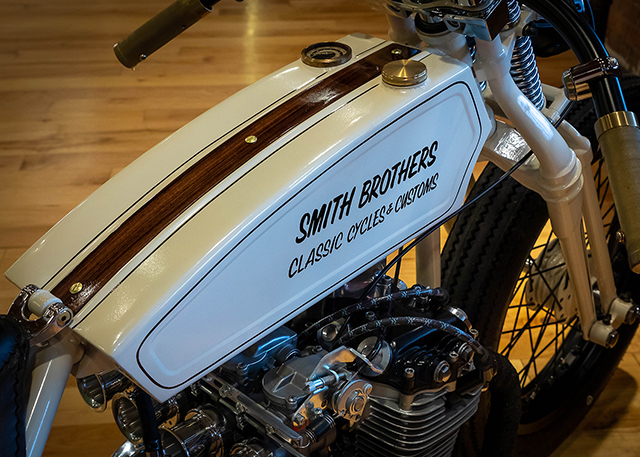 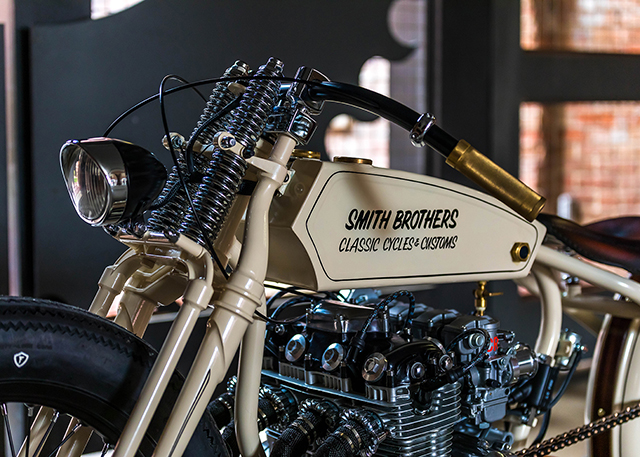 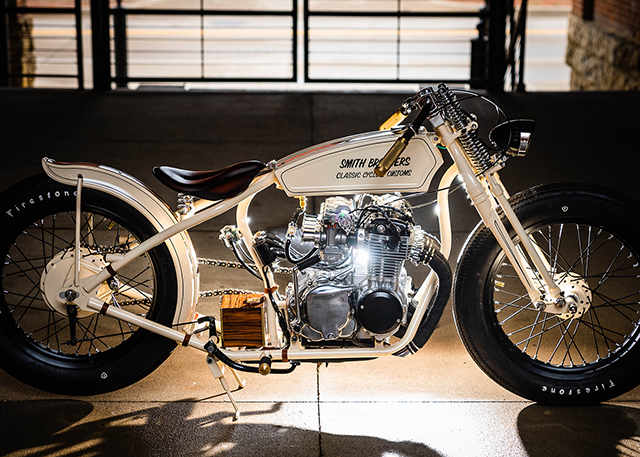 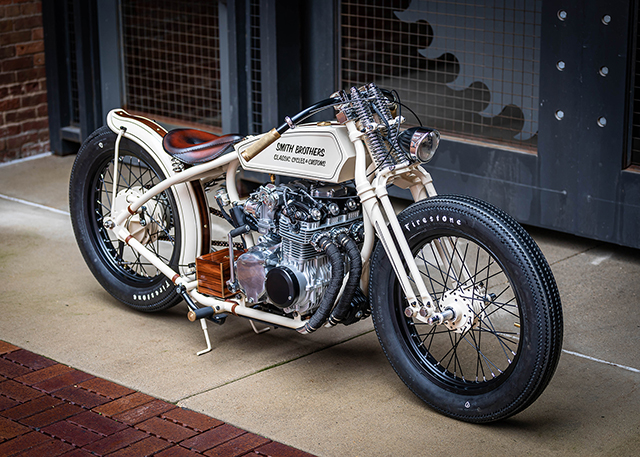 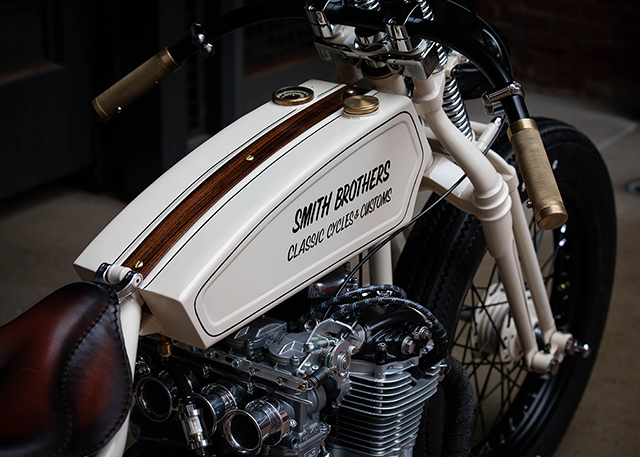 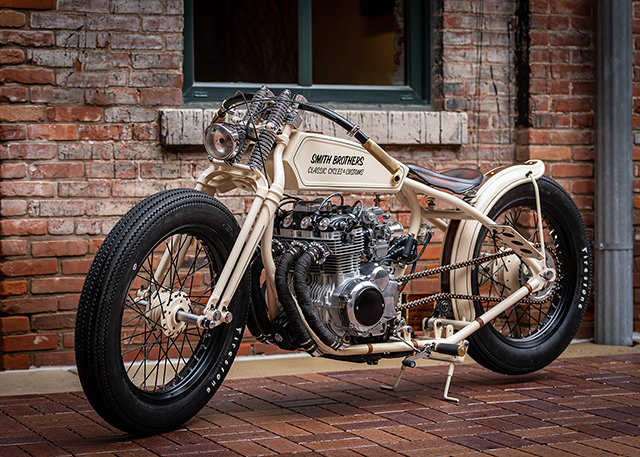