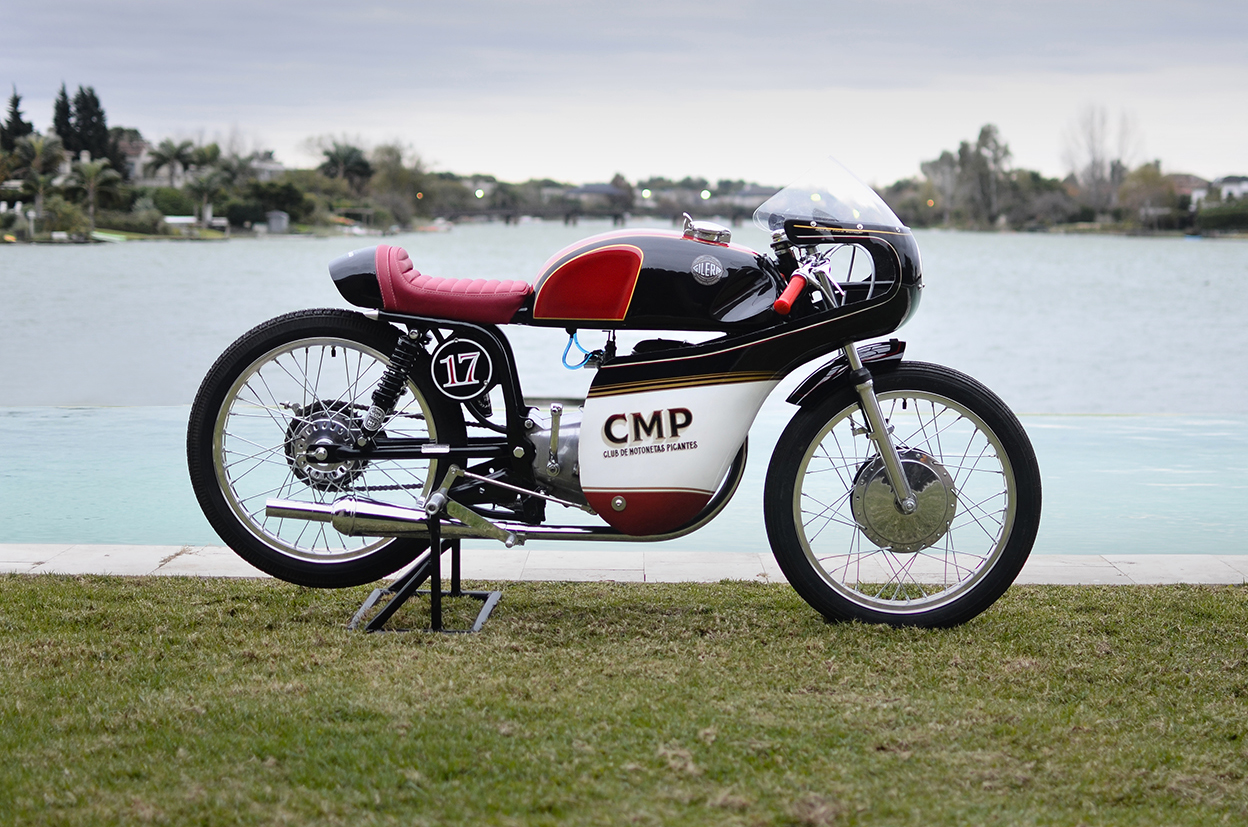 In some parts of the world you can still buy a brand new Gilera, only that truth be told, it isn’t any such thing. It’s just a Piaggio scooter with a different badge on it and you can’t help but feel how far the mighty have fallen. For those who do remember the brand, they’d know that their golden era was the 1950s when they dominated Grand Prix motorcycling racing and some of their smaller bikes were the most fun you could have on two wheels. From that same period comes this 1957 Gilera 150 Sport, that arrived at the door of Argentina’s Coronas Modificadas in near unsalvageable condition. But the team have worked their magic and created a beautiful little racer known as ‘La Brava’.

For those who don’t know the Italian marque well, consider this, in the 1950s with stars like Umberto Masetti and Geoff Duke riding their bikes, Gilera won six of the 500cc World Championships on offer that decade. That’s the sort of dominance we’ve seen from the Honda factory squad with a certain Mr Marquez at the helm, and you wouldn’t expect Honda to disappear in the same way Gilera has. Even as recently as 2008, the late great Marco Simoncelli won a 250cc World title for the company, that was founded in Arcore in 1909 by Giuseppe Gilera.

But winning on Sunday just doesn’t equal sales off the showroom floor come Monday, as it once did and so if you want your Gilera fix, you have to go old school. Which is exactly what the owner of this ’57 did. Only one problem, the bike he wheeled into Coronas Modificadas was barely hanging together. “When this bike came to my garage it looked like Frankenstein,” laughs CM head honcho Gabriel Jiménez. Not only was it a mess, but many of the parts on the bike were from other makes of motorcycle. So, it was decided a racer style machine would be the best path forward.

Thankfully, there is a bit of a cult following for the old Italian machinery in Argentina and the owner is also one of the top men in the Club de Motonetas Picantes (Spicy Scooter Club); so there would be some help sourcing the parts. With the cobwebs dusted off, the unidentifiable parts moved to a corner and the genuine Gilera parts bagged and tagged, Gabriel could get on with the build. His first task was to smooth out the old frame, clean up any metal cancer and then decide on what changes needed to be made.

At the rear he cut back the frame, ditched the old rear fender mounts, and turned a set of plugs to fill the end of the twin tubes. Up at the pointy end, he then got to fabricating and crafted a front fairing stay and mounts further along the bike to ensure everything would be well held in place. Then it was time to re-weld the shock mounts, smooth out the swingarm and give the whole chassis a fresh coat of paint. Now the full race fairing could be sanded smooth and new mounts attached, the origin of the fairing, however, is a mystery to all.

Although the boys believe it’s probably from the ’60s and definitely from a race bike in Argentina. A new screen was cut and with the enigma of a fairing bolted up, Gabriel found the perfect tank to complement its lines in the form of a Gilera Macho unit. This too was body worked to perfection and a Monza style gas cap was, of course, a must! Small fenders front and rear were rolled and mounted, and a custom set of sideboards was made to fit. The seat is a slimline race unit that has then had the bare foam replaced with a beautifully stitched red leather seat.

The paint is simply stunning, glistening like a true race bike on the grid, the gloss of the tank is perfectly offset by the club logo, bike name graphics, and a perfectly laid Tricolore pinstripe. To further enhance the bike’s period racing credentials, a full front end from a Honda CB125 was slotted in place with the glorious drum brake and new 19in wheel polished up to perfection. The rear gets a new set of shocks for some modern dampening control and then like the front end, the rear hub and wheel look good enough to eat from.

Twist the red throttle on the old Ducati bars and the little engine screams to life, giving away the last superb little secret. These were underpowered engines when stock, but Gabriel has gone to town with a full build. The gearbox was rebuilt to handle the extra power before a new high comp piston from Japan was fitted along with a race-spec camshaft. The head has been given a once over and new twin springs fitted for valve operation, and the upper assembly fully balanced. Morini ignition fires the spark, the rebuilt carb supplies the fuel, and spent gases race out of that era perfect exhaust. It starts first kick, shifts like a Swiss watch via its new rearsets, and with no track to compete on, ‘La Brava’ earns its name racing on “the forgotten roads” where the boys of Club de Motonetas Picantes literally earn their stripes.