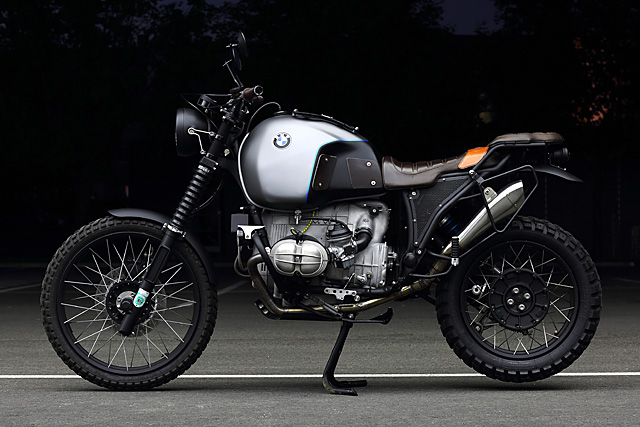 Zen and the Art of Motorcycle Maintenance is not a technical instruction book but the tale of a journey punctuated with philosophical insights. The Motorcycle Diaries too has a title that requires further exploration and is in fact about one Norton, two young men and the journey that sparked the world’s most famous revolutionary’s deep thinking. From T.E. Lawrence to the modern-day adventures of Charley Boorman and Ewan McGregor, motorcycles are as much about the adventures they take us on as they are about the machines themselves. For Blaž Šuštaršič the founder of Slovenia’s ER Motorcycles such an epic trip on two wheels has played on his mind for years, so when a client worked in the door looking for someone to build a bike fit to travel the world Blaž knew it was a project that was meant to be. Using a 1989 BMW R100GS Paris Dakar as the base he’s created a machine called “Glober” that’s ready to write a legendary new tale. That client who walked through the ER Motorcycles door is Christian, who is a banker by day in Austria and a brilliant photographer who loves nothing more than seeing the world with his camera over his shoulder. That he shared Blaž’s dream to globetrot on a custom machine meant the two instantly hit it off, “each year I keep telling myself that I’m going to plan a trip and go on an adventure with my bike (that I haven’t made myself yet), visit a couple of interesting countries — maybe even a different continent. But I never seem to find enough time for myself, let alone the courage to leave everything stand still for one month, close the workshop and just go out there and explore the world,” explains Blaž’. So when he heard Christian wanted a custom bike and say “he’d like to travel the world with it, Argentina, to be exact, and document the whole thing. Needless to say I loved the idea – kind of having a part of me travel with him and join him on this wicked adventure.” Immediately the design was drawn up with adventure, earthiness and minimalism all key elements required for such a build. With an ’89 BMW R100 GS in the ER workshop it was stripped down to its bare bones, the engine removed and the frame placed up on the stand. The subframe was removed and an entirely new item fabricated in-house that not only looks incredible it adds a huge amount of utilitarian appeal for a purpose. “Since the whole point of the bike was to join its owner on long distance tours, we added a lot of surface for different kinds of bags” To hold those bags and other accessories the equipment and craftsmen at ER fired back into action fabricating a host of bag racks, supports and carriers so that Christian could carry all that he needed on his South American adventure. And just like everything done at ER Motorcycles even the bag racks are of incredible quality, the one that holds the tank bag takes on its own intricate design, features heavy mesh for a grilled out effect, an ER decal and is affixed with stainless bolts like everything else on the build. With the subframe bolted onto the main chassis new mounts were made for the fenders front and rear, with both items proving generous in their size to keep the worst of the Argentine roads off Christian in his travels. Knowing some wild roads were to be traversed the airhead engine is protected by guards on each side and all of the metal work was then sprayed in a hard-wearing matte black for a truly purposeful finish. An adventure bike is not much good if it only holds a few litres of fuel and you don’t want to go off the beaten path unless you’re sure you can get back, so Blaž decided to switch out the stock plastic tank for another GS item in metal that gives an increase in capacity without going for a full competition unit that would spoil the good looks. Then it was time for more paint “We chose these colours because they work very well together, the blue is taken from the BMW emblem, it also represents the sea water of our Globe. The matte grey should also work better for a travel bike, which easily gets dirty. In our opinion these colours also make the bike look more masculine and powerful.” With the stock bike having come laden with plastic bodywork that has long since been ditched, the side covers are more of ER Motorcycles brilliant handy work, this might be a machine built for long days in the saddle, but the custom touches and attention to detail is simply first class. Nowhere is that more evident than in the design and look of the seat that gives this adventure machine a touch of class like no other. The aluminium seat pan has been generously padded, with extra material added around the thigh area for increased support. But it’s the leather work by Ales Urbanc that takes things to a whole new level; a rich chocolate coloured hide is stitched like an expensive Italian shoe and is offset thanks to a raw leather back strap with ER decal. The rear luggage rack is another brilliantly crafted piece and Ales also stitched a removable pillion pad should Christian pick up an extra passenger along the way. There is even a set of passenger pegs mounted off the new subframe and a set of dirt bike pegs for the rider to give a solid place to stand when those big rocks and muddy roads have to be taken on. While the engine was out of the frame it was given a thorough once over and although the donor bike is a Dakar version they barely differ from stock. The reliability of the R series engine is so great that even the race teams barely made changes to the motor; outright speed does not win a long race in harsh conditions! The 980cc air-cooled lump produces 60 odd horsepower, but it’s the endless supply of low down torque mated up with an ultra-reliable shaft drive assembly that makes the GS such an incredible machine for any type of long distance work. The stock Bing carbies have been refreshed and all the hoses and clamps have been replaced while all the consumables have been swapped out for new items to give Christian an unbreakable ride. But it’s not all boring; things get fun with a little loudspeaker for the mechanical symphony in the form of an exquisite HP Corse exhaust system that lets any animals on the road know you’re coming. If there is one thing you don’t want to leave to chance when sending a customer off on an adventure riding an ’80s bike is thirty year old wiring. So ER have stripped out the loom and re-wired the entire bike with the best components in the industry. It all starts with a Motogadget m-unit that feeds power to a full array of parts from the same company, including handlebar switches, a digital speedo and indicators front and rear. The m-Blaze units at the end of the Renthal medium grips sit on a set of handlebars from the same company that have proven to be the first pick of the dirt bashing brigade. A Magura brake master cylinder adds more big dollar reliability to the controls and a 7 inch headlight illuminates the path to the next village, with a vintage tail light mounted on the rear fender. The suspension has been left stock up front, albeit with an overhaul and the addition of gaiters to keep the stanchions clean. While outback the shaft drive swingarm is now sprung by a new adjustable shock and blue spring from WP suspension. The stock rims, 21 inch at the front and 17 inch at the rear are the stock units with frame matching powder coat and have been re-laced with stainless spokes. With the tyre choice vital for such a trip a set of dual sport Heidenau K60 Scout’s has been given the nod and being a true 50/50 will allow Christian to venture just about anywhere his heart desires. With the bike finished “Christian suggested a photo shoot at a special location in Austria. Ever heard of architect Gunther Domenig’s house? I’m sure you have, since it represents one of the most famous present architecture pieces of the Carinthia region. Domenig invested 30 years of his life into it, to make it just as he’d imagined which tells us a lot about his passion and drive for perfection.” Which is an apt way to sum up the incredible work by ER Motorcycles on this amazing BMW GS, infused with passion and ready for its globetrotting adventures.