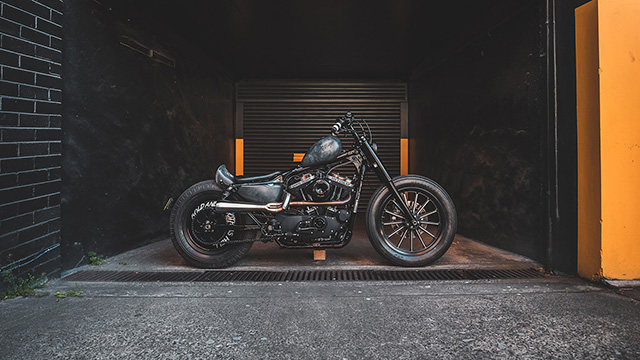 Nothing goes better with the image of Harley-Davidsons than hard liquor and tattoos. So when one of Gasoline Motor Co.’s best clients for commissioned bike builds – William Grant and Sons for the famous Sailor Jerry Spiced Rum – they couldn’t wait to get their hands dirty again. The ‘SJ2’ is the second collaboration build between the two companies. After building a Triumph Scrambler to chew up the dirt in 2018, this year’s collaboration holds the legacy of old-school sailors and hula girls in paradise. 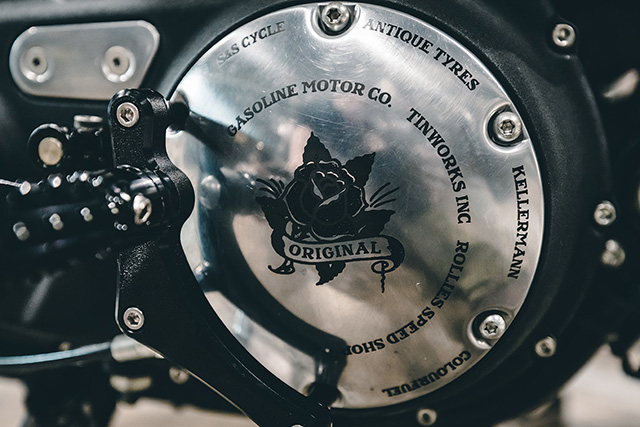 The standard Iron 883 are a dime a dozen, easy to get a hold of second-hand. It was the perfect base Harley-Davidson for a promotional motorcycle, to be drawn and given away to one lucky winner. The aggressive styling and lack of chrome parts has a tough urban appeal and the height of the motorcycle suits riders of all sizes. 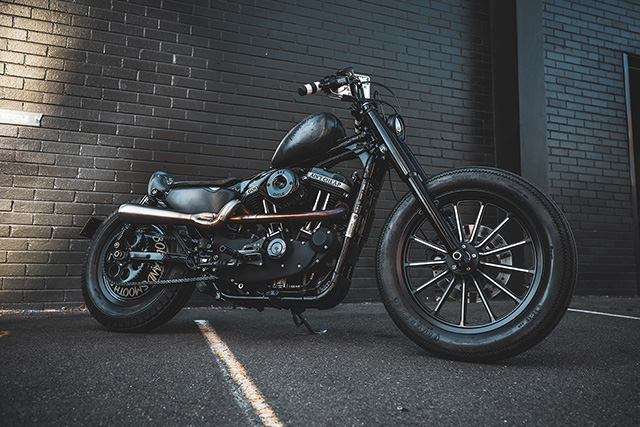 The brief from Sailor Jerry was broad – a machine purpose built to look cool and ride even cooler.  This meant Gasoline Motor Co had full creative freedom and decided to transform the HD Iron into a brat-style Frisco chopper, to exemplify the vintage Caribbean-cool vibes of the American rum brand, but without actually producing a vintage machine. 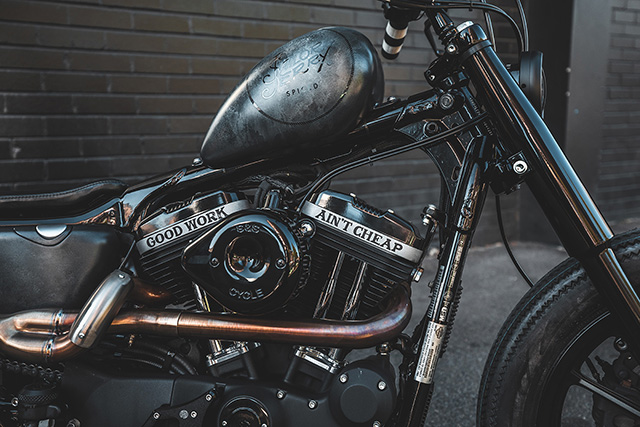 There’s actually nothing vintage about this machine at all – it’s a combination of classic silhouettes with innovative technology.  An entirely new vibe for Gasoline Motor Co, but one that is a joy to look at and ride. 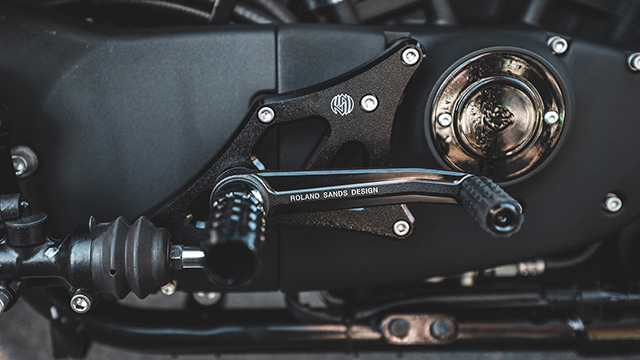 What looks like a small capacity fuel tank is even smaller than it looks since it was fabricated to house the EFI fuel pump and is inset with a Motogadet vertical mount speedometer. Thirsty Spice carries 5.5L of unleaded, no more – The high mounted peanut tank is sponge splattered with charcoal satin shades, with gloss black Sailor Jerry and Gasoline Motor Co paint creations, designed in-house and executed by Colorfuel. 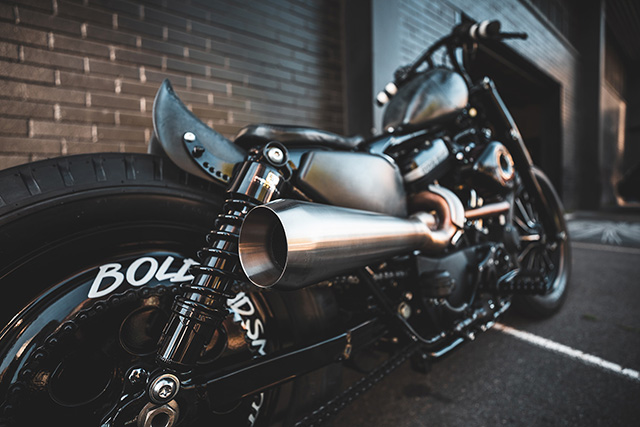 Another intricate feature is the tiny neutral light and low fuel light which has been wired in and mounted into the top view of the S&S air filter.

A flicked up short rear guard was saved and shaved from a 1970’s shovelhead and painted in the same colour scheme, with a Norman-Collins style tropical paradise tattoo. The short guard shows off some cheeky rubber and wishes ‘Godspeed’ to those behind. The rear is kept clean with tiny Kellermann dual-function lights and a custom numberplate bracket. 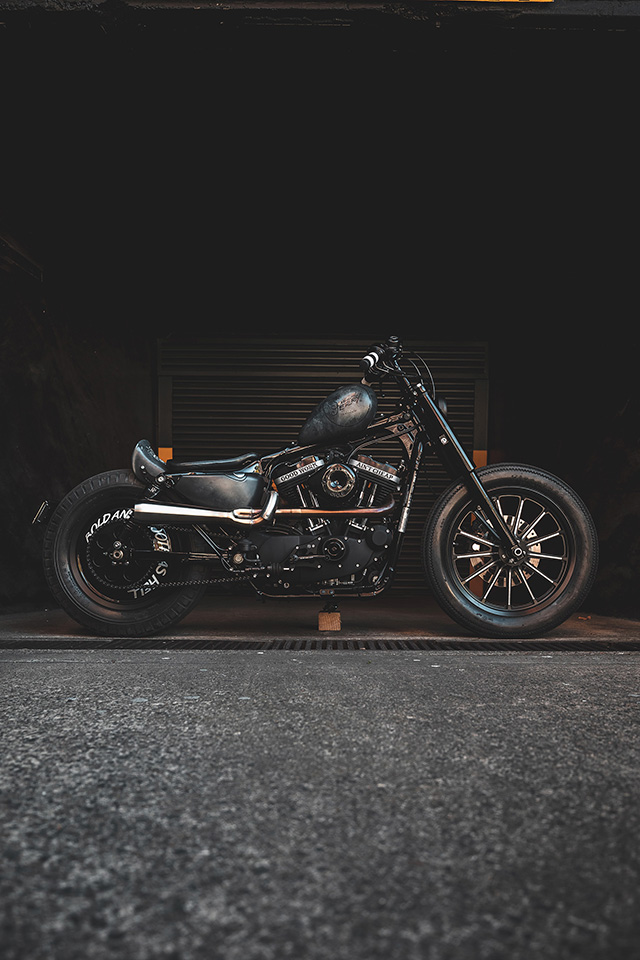 Sweet on the eyes and even sweeter to ride, a custom motorcycle equally about styling, performance and a mood. The feeling of cruising along with a busty Hula Hula girl on the fuel cap is like a tropical holiday. The rider sits in a narrow and nimble stance, feet perched on the RSD high mid controls, hot little hands wrapped on chunky coke bottle grips in black and white jail stripes. Bad boy 101. 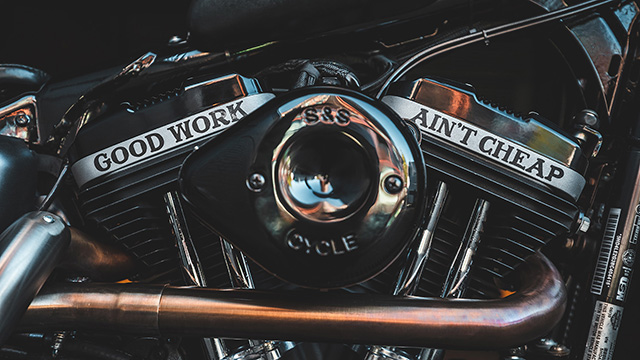 A tidy front end of Lowbrow customs fat fork shrouds, custom fabricated handle bars and small but bright LED 4.5” headlight, all you need, nothing you don’t.

While everything else on the machine is blacked out, the exhaust in contrast is a chubby stainless steel can with a round knot feature designed by Gasoline and made to function by Johnny Japan. 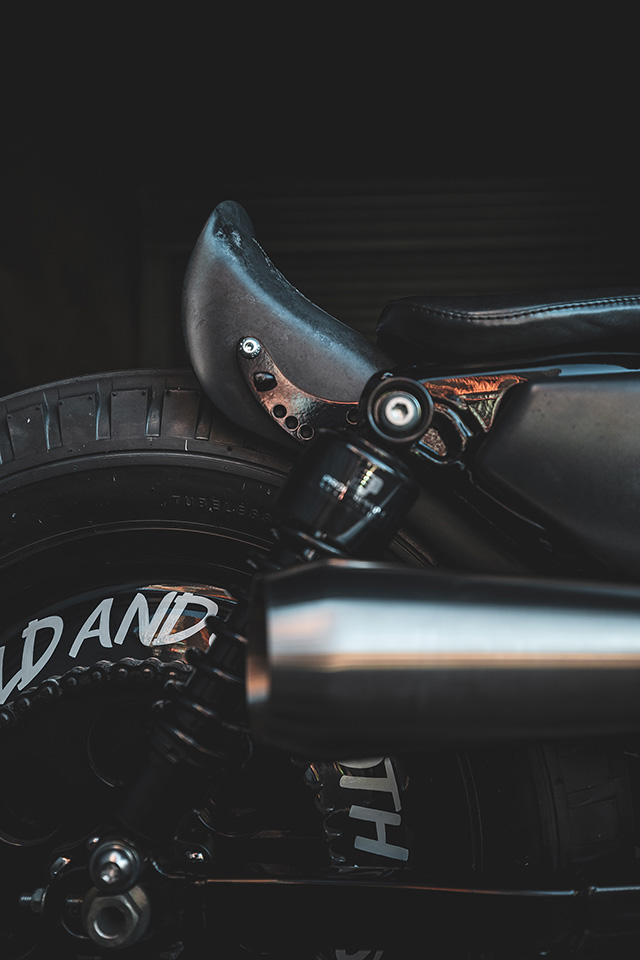 The rear wheel moon disc is ‘bold and smooth as hell’ with a Firestone Tractor vintage style tire. The rear suspension was upgraded to a blacked out Progressive shock system to increase ground clearance.

As with most builds, a tight budget pushed Gasoline to claim a few favours from trusted suppliers. As a thanks, their names were etched on the engine cover as a decorative touch. 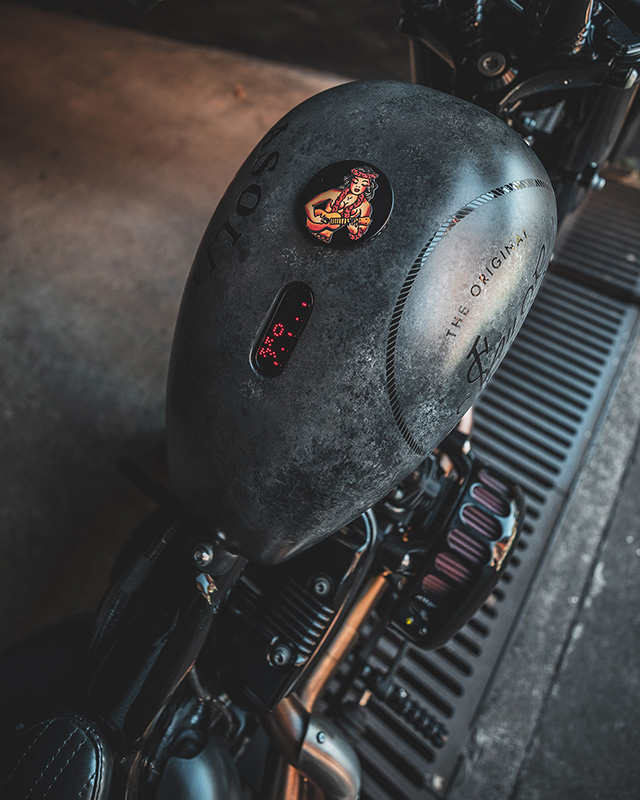 A slogan that sums up the craft of making good rum and good motorcycles is laser etched to rocker box. On one side – Good work ain’t cheap, and the opposite side reads – cheap work ain’t good. Now ain’t that the truth. 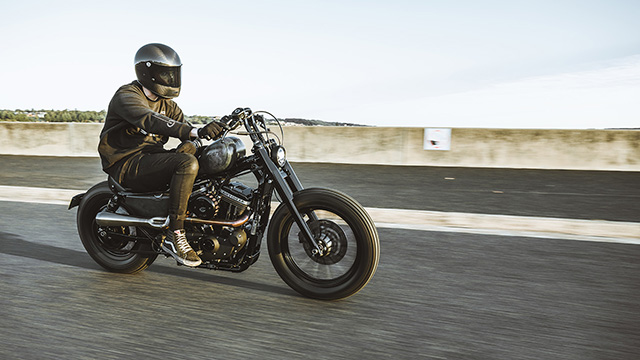 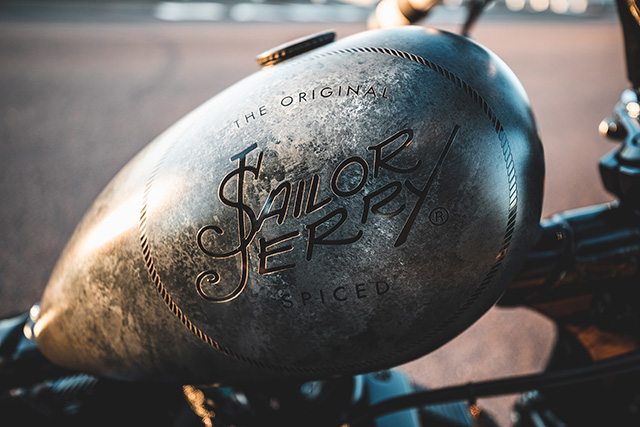 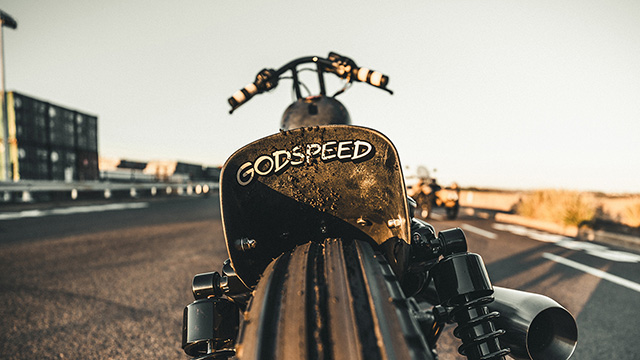 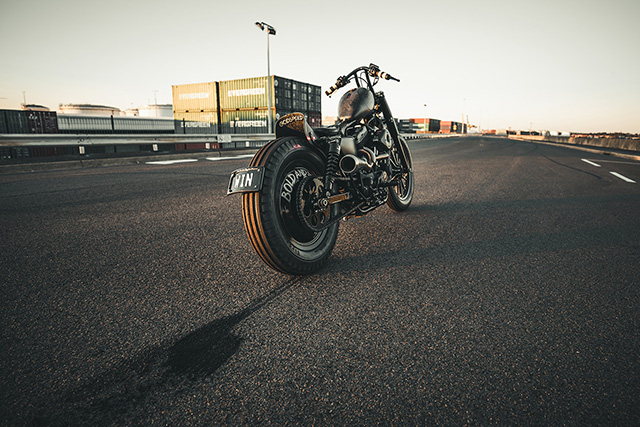 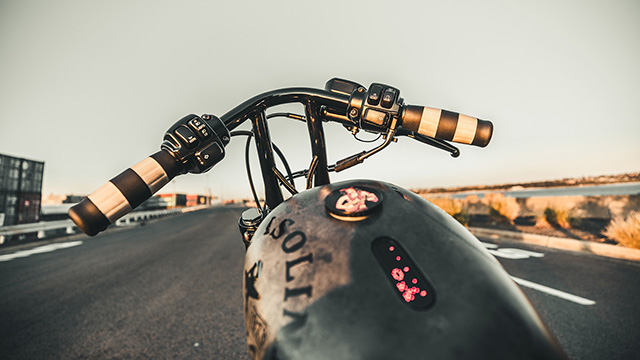 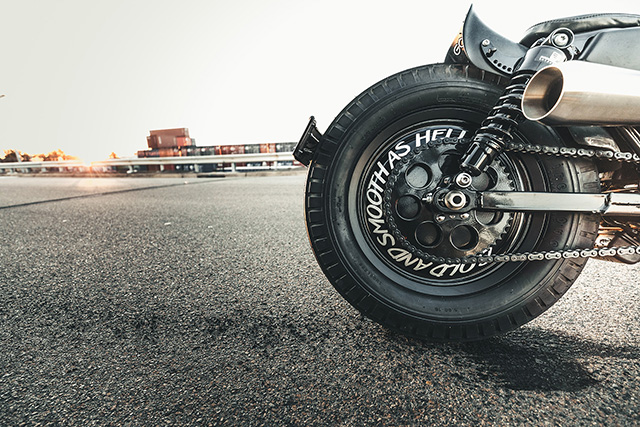 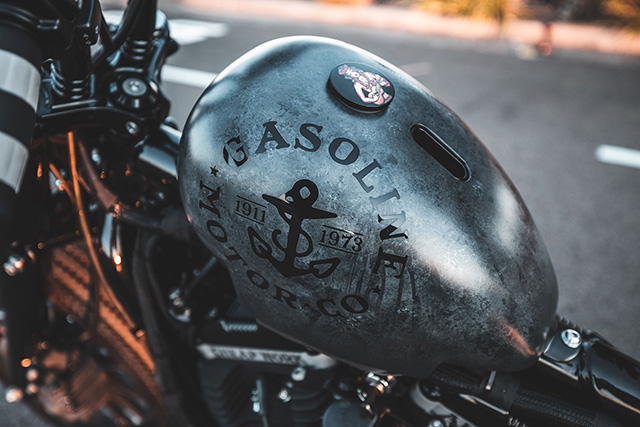 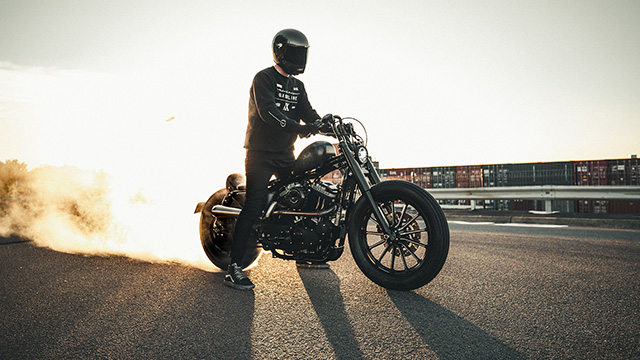