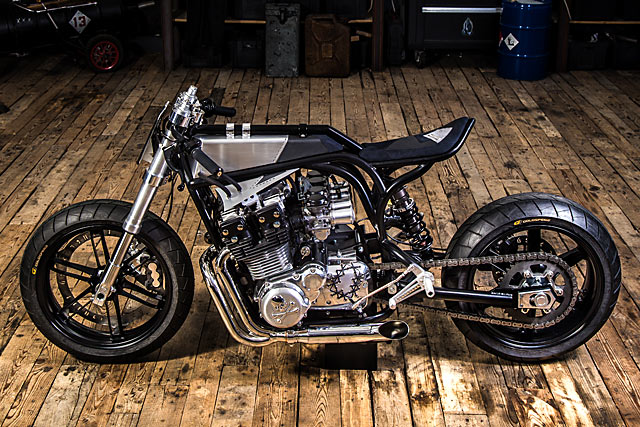 Karl Renoult heads the curiously named custom shop Ed Turner Motorcycles, in Nantes, France. We’ve been following his builds for the last few years but nothing has prepared us for his new project. And this only one half of the enterprise, a mid-eighties Suzuki GSX1100 forming the ‘masculine’ part of a matched ‘his and hers’ pair of custom rides. Designed to reflect their owners’ love of high fashion, clubbing, and possibly sadomasochism, it’s unlike anything I’ve seen before. After a close look, I’m not sure if it has a kill switch or a safe word. I’m also not sure why Karl picked the name ‘Ed Turner’ for his workshop. For those unfamiliar, Mr Turner was a prolific motorcycle designer and the head of Triumph Motorcycles during the halcyon days of the 30’s and 40’s. I’d be very curious to know what the very esteemed, very British and very proper engineer would think of this bike. If nothing else, I don’t think he ever started a build like the way Karl did. Rather than the usual slow accumulation of parts or time spent carefully considering drawings, Karl started the build process by visiting the house of his clients to gain a better understanding of their aesthetic. “It was full of leather and luxury brands. One of which I cannot cite,” Karl says. Looking at the myriad of skulls and leather stitching I’ve got a few ideas, but I’ll leave them for now.

A closer look at the photos can only hint at what he found inside the den of iniquity that his clients must live in. The Suzuki GSX1100 has some of the most curious and left-of-centre ideas I’ve seen incorporated on a build in a long time. Much of which involves leather. All those adornments, the skulls and stitching and zippers sit on a bike that, even without the high fashion-cum-eurotrash-cum-BDSM-cum-cum aesthetic is pretty damn special. The frame has been heavily worked, a new fuel tank fitted and Buell front wheel mounted, replete with ‘Ed Turner’ cut into the discs. It’s a brawled-up modern take on a streetfighter, all powered by an overhauled, blasted, polished and engraved powerplant whipped into shape by Karl and his friend Gael from Pocka Bike. Even I have to admit that after a while many custom bikes start to look the same. There’s only so many variations on the theme one can look at before the lines become a bit blurred, like Firestones struggling to find traction on a damp afternoon. But Ed Turner have created A Suzuki that, whether you like it or not, is very different. Even if I’m not sure if I’d ride the bike or it’d ride me.