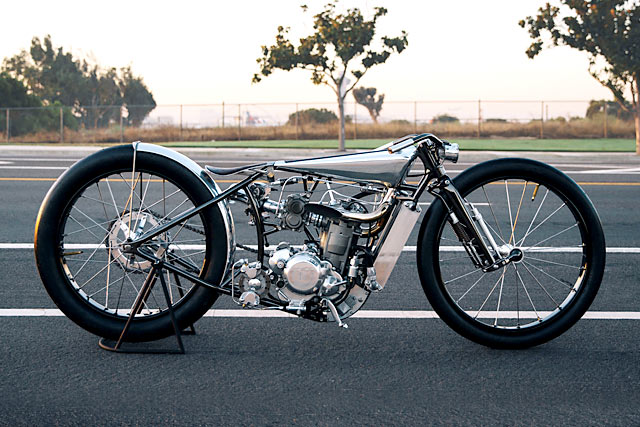 Dreaming of owning a Max Hazan motorcycle? As far as realistic life goals go, it’s right up there with walking to Mars or curing cancer using only a six-pack of beer and some toenail clippings. Put simply, unless you win the Lotto it’s never going to happen. Now prepare to meet a man who owns five of the things. Yes, you read that right. And if that wasn’t enough to send your jaw floorwards, he’s extended collection also includes bikes from Craig Rodsmith, Revival Cycles, Bandit 9 and Deus Ex Machina. His name is Bobby Haas, and he’s just opened the latest and greatest of his public collections. Welcome to the new Haas Moto Museum & Sculpture Gallery.

Talking to the man himself, it’s clear that his personal success and ability to buy as many cool custom bikes as his heart desires hasn’t gone to his head. Aussies are well-known for calling a spade a spade, and Craig Rodsmith, our Antipodean man on the ground in the US, went out of his way to explain that Bobby was a ‘top bloke’. For those not in the know, personal praise doesn’t get much better than that in the land Down Under.

We started with the obvious question. Just how many bikes does Bobby have? “Our total collection now numbers just shy of 150 cycles,” he says . “That’s across our two facilities. I am basically the ‘new kid on the block’ in this area, since my first acquisition of a cycle for display was in December 2014 by submitting the winning bid on eBay for a 1952 Matchless G3L. Since then, we have been acquiring new bikes at a rather mind-bending pace of almost 50 per year.”

“The cycles have been collected from all around the globe via direct negotiations, from domestic and foreign dealers, via auctions by Bonhams and, in the case of our Custom Collection of 24 handmade cycles, via direct purchase and commissions with renowned builders such as Craig Rodsmith, Max Hazan, Revival Cycles, Parker Brothers Concepts, Arch Motorcycle, Alex Earle, RK Concepts, Fuller Moto, LC Fabrications, Bandit 9, Deus Ex Machina, as well as three custom cycles that I personally designed and built with Strokers Dallas.”

In less than a year after his inaugural purchase of that Matchless in December 2014, he opened the first Haas Motorcycle Gallery in Dallas in 2015. A few months later, he began construction of his second gallery. “It’s known as The Haas Motorcycle Gallery at Dragon, and it has 5000 square feet of exhibit space. One year after that in mid-2017, we began construction of The Haas Moto Museum & Sculpture Gallery.” This new space opened its doors just last week, but for those of you who like a bit of fanfare with their forks and four-strokes, the big opening is scheduled for May 10th.

“The first gallery has been consolidated into the 20,000 square feet Haas Moto Museum & Sculpture Gallery, so we now have 25,000 square feet of exhibit space in the Dallas Design District. The Haas Moto Museum now exhibits 110 cycles, including 4 currently en route to Dallas, while The Haas Gallery at Dragon (located just two blocks away from The Haas Museum) has another 34 on display.”

“We are enormously proud of every square foot of space in both The Haas Museum and The Haas Motorcycle Gallery at Dragon; neither achievement would have been possible without the gracious support of a wide cast of characters, particularly in regards to the Custom Collection in The Haas Museum, which we consider to be our ’piece de resistance’ attraction.” How’s that? A moto museum that puts its customs first.

Bobby and his team have a rather ambitious mission for The Haas Moto Museum; to become – and to be recognised as – the finest moto museum, pound-for-pound, in the industry. “This is integrally bound up with the emphasis we place on custom cycles. Having the distinct privilege of working intimately with creative geniuses such as Craig and Max, and the others whose masterpieces we have collected only helps us get closer to this goal.”

“I am firmly of the belief that the custom side of the industry – rarely if ever emphasized by other museums and galleries to the extent we do – represents the essence of both the history and the future of motorcycling,” says Bobby, proudly. “It is often the custom designers and builders, driven by passion and not financial rewards, who have been the engine of innovation for some of the most recognizable marques in the world today and even some ones no longer in production, but which are an integral part of the heritage of motorcycling.”

[superquote]“I am firmly of the belief that the custom side of the industry… represents the essence of both the history and the future of motorcycling.”[/superquote]

At this point, if Renaissance man Bobby suggested that we all ride to the UN on custom bikes and take over the world, we’d be into it. Such is the man’s charm. But then he really takes it up a notch. “I have been an avid follower and admirer of Pipeburn.com for several years; note that of the five cycles we own by Max Hazan, two have the distinct honor of receiving Pipeburn’s ‘Custom Motorcycle of the Year’ award; the ‘Supercharged Ironhead’ and the ‘Twin Musket’, which was my first project with Max.” Craig was right. Bobby is a top bloke. Good taste in blogs, too…

But with all of this custom talk, it’s important to note that Bobby’s museums aren’t just focused on bespoke creations. As you’ll note from these photos, there’s vast amounts of historical bikes in the History Hall, along with more amazing metal in the Race Track section, the Sidecar Alcove and the Moto Sculpture Gallery. Hell, there’s even a store with custom leather jackets and model mini cycles.

So if you’ve thinking of going to the Handbuilt Show this weekend, why not drop by The Haas Moto Museum as well? You’ll not only be in the presence of five of Hazan’s best, you’ll also be conducting research into just how many custom bikes the average human can see in one weekend before their overloaded brain turns into gasoline-scented pink mush. Tell the paramedics we sent you. Or on second thoughts, maybe don’t.