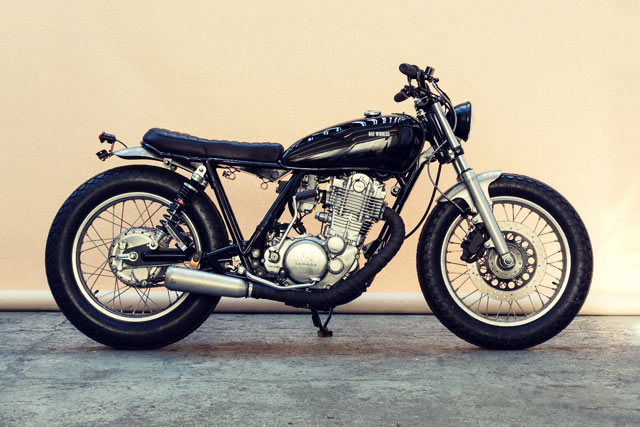 Clients are the same wherever you go. They come to you because they like what you do and then they go ahead and ask for something that’s the absolute polar opposite. Known for your cafe builds? How’d you like to build them a bobber? Knock it out of the park with your last four tracker builds? Then why not try a drag bike? You get my drift. So when the lads from France’s renown Bad Winners had a client that wanted a ‘pure brat-style’ bike, you can probably imagine the reaction. You might as well ask Picasso to paint a Pollock. But instead of a hissy fit, they’ve gone all ‘carpe diem’ and done their own sweet thing that also happens to work a treat. “Bad Winners was created in 2011 by myself in Paris,” says Walid, the shop’s biggest winner. “Thankfully, the company has been growing a lot lately, with plenty of orders coming in the door. We’re well on our way to becoming one of the most productive garages in France. My to-do list currently has 14 orders on it, but as with any shop we don’t like to brag. We’re just thankful that the work’s there for us.” Securing a mint EFI Yamaha SR400 from 2014, the boys began their long stare into space seeking some inspiration. “To be honest, Japan’s Bratstyle was clearly our starting point,” says Walid. “We have a lot of respect for their work. They clearly have their own unique design and vision for their motorcycles. When your own personal style becomes a standard, you can be pretty sure that success and recognition will follow.” Despite this, Walid didn’t want to create a pure copy of the shops’ style even if everybody else was doing it. So with a few small but meaningful touches, they were able to both satisfy their customer and create something worthy of the Bad Winners name.

“The first challenge with the ‘14 SR400 is that it’s a fuel injected bike. Which is all fine until you realise that it’s taking up all the bike’s free space. That’s why I decided to throw out the injection set-up out and go back to a carb with a proper Mikuni TM36.” Adding to the decluttering drive, Walid went a few steps further. “With no electric starter, a home-made CDI box, a Motogadget M-Unit and a svelte little lithium-ion battery, it allowed me to create lots of space and simplicity without sacrificing usability.” As the saying goes, making something simple is usually a lot harder than making it more complex. Other details on the bike include some super comfortable YSS Eco-Line rear shocks, the fulsome Coker Diamond 18″ tyres to add that all important ‘retro-without-being-Firestones’ vibe, a Kustom Tech clutch lever and master cylinder and the ever-present Motogadget Speedo. Perfect combo? You’d be hard pressed to find a better one for the job at hand. Unsurprisingly, the Yamaha build’s main challenge was the addition of the Mikunis. While on the surface it may seem to be a simpler task than many other custom bike mods, the scope for niggling issues with proper fueling, throttle connections and those infuriating ‘why the hell isn’t this asshat of a bike running properly’ nightmares are almost limitless. In the end, they’ve produced something that’s clean, simple and that makes us pine hard for the simpler custom days of 2007. Ahhh, the good old days! Now if you’ll excuse us, we’re going to grab our iPods, put on some Linkin Park and go for a ride. Peace out.