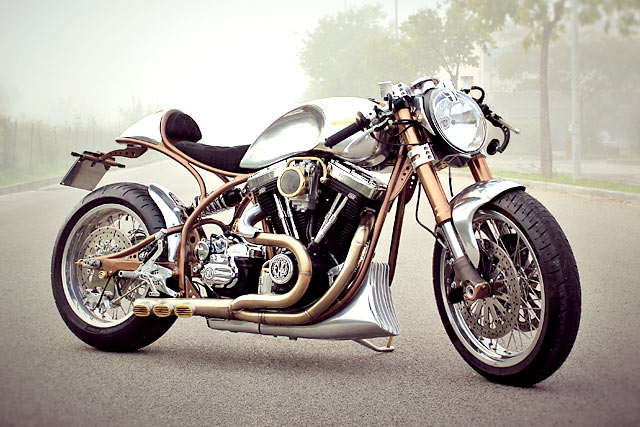 The Italians sure do have a way with words – especially when it comes to naming fast machines. For their bikes, there’s the ‘Brutale’, the ‘Pantah’ and the ‘Devil Lusso’ to name but a few. Look further a field and you’ll find cars named the ‘Diablo’, the ‘Murcielago’ and even the ‘Millechili’. But even with all their fancy marketing departments and college graduates, few names come close to the spectacular moniker that Italy’s FMW Motorcycles gifted their new S&S-powered Harley cafe racer. Meet the ‘Hurakàn’. According to Lorenzo Fugaroli, FMW’s owner, the name ‘Hurakàn’ comes from the Mayan deity of wind, fire and storms. And while that may sound like most of my Sunday rides, it is believed that the word was introduced into the Spanish language to describe the tropical storms of South America. Far from this just being a cool name for a bike, Lorenzo adopted it as a kind of guide to how he wanted the bike to turn out. “It was to be a unique bike, completely hand-made, and most importantly it had to be very powerful and possess excellent dynamic characteristics”. According to FMW’s philosophy, these ‘special’ shop builds have to be easy and comfortable to ride, while still retaining a certain amount of art. “The combination of Harley Davidson and MV Agusta components was specifically chosen to celebrate the past acquisition of the Italian brand by the giant of Milwaukee, which spurred thousands of enthusiasts to dream of building unique bikes, maybe a little like this”. Since Harley’s philosophy and components are arguably underdeveloped from a performance standpoint, the Hurakàn uses a mighty S&S V-twin with more than few go-faster parts. But note that the platform still has the engine, retro style and iconic design of a purebred Italian racer. “The starting point for the construction was a 1968 Harley Davidson shovel frame, but of course it has been drastically altered in the cradle and the rear frame to be able to hold an S&S super stock engine. Also, the swingarm was modified to allow the installation of a monoshock that was custom-made for FWM by Italy’s Bitubo”. The front part of the chassis saw Lorenzo mounting an MV F4’s Showa forks, with the triples being hand machined from steel billet. The braking system mounts two, six piston Nissin calipers on the front and a Performance Machine caliper on the rear, both squeezing on custom floating inox steel disks. “The considerable propulsion is provided by the powerful 1600cc twin-cylinder S&S engine, while the transmission is entrusted to a BDL belt and chain. The gearbox is a modified 1990’s softail item, with the addition of a hydraulic actuator and the fuelling is handled by a Mikuni carburetor with a flat 48mm valve, together with a beautiful velocity stack machined from brass”. The Harley’s damn spectacular exhaust system includes two 45mm manifolds and a 60mm tailored silencer in a Kimura style. The entire bodywork was handmade in 3mm thick aluminium to make it able to withstand the engine’s vibrations. The rear contains the oil filter and tank which has a 5lt capacity. The fuel tank and the tail are composed of two parts allowing Lorenzo to hide the bike electronics within; a Motogadget Motoscope Pro lets the rider know what the bike’s up to. “The headlight is inspired by the MV Brutale, while the wheels were assembled with Harley Davidson’s hubs, steel spokes and Morad rims. The end Harley was built entirely by hand in six months”. Sounds like a pretty productive half year to us.