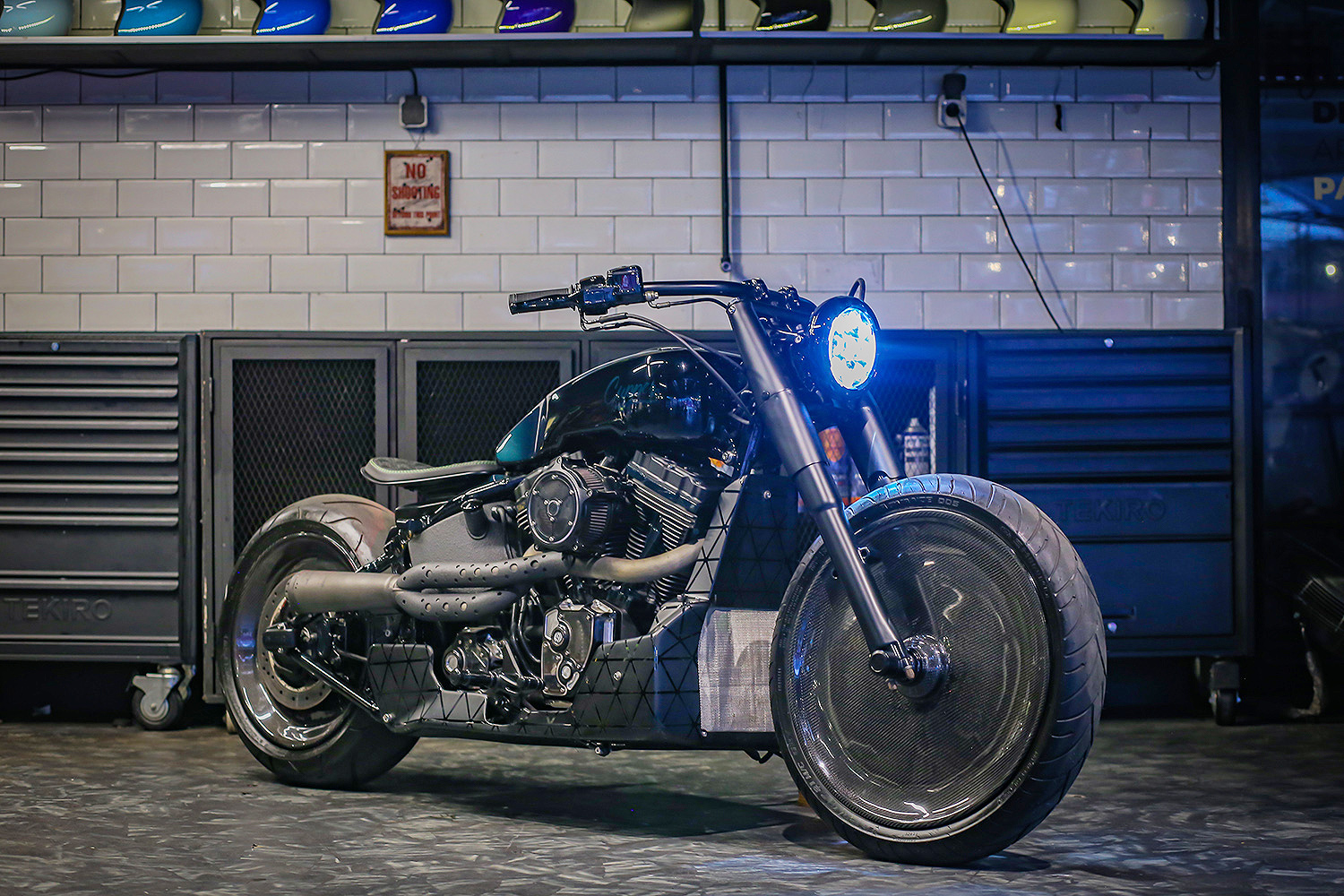 It’s one of the world’s most popular tourist destinations and has been a favourite of surfers for decades, but the island of Bali is also home to one of the custom motorcycle community’s greatest success stories. From humble beginnings, the team at Smoked Garage now has a warehouse-sized workshop and a stunning storefront along a busy street. But with nearly 20 mechanics out the back, you can imagine how much the daily conversation revolves around everything mechanical and a chance to test a new oil and build its company a motorcycle had the team pumped and ready for action. So to try out this new Texas Tea and push it to its limits, they picked out a 2008 Harley Fat Boy and gave it a tough-as-nails daily drag bike makeover.

“Our team at Smoked have always been passionate about motorcycles, so when Cupper Oil approached us to test their oil into our bikes we were really excited,” SG founder Nicko Eigert told us. First, they wanted to put this oil through its paces, and with that many mechanics to impress, all with high standards for what they demand in a lubricant, it must be decent stuff. Satisfied they could get behind the product, they then had the design team start to explore the best kind of bike to fit the bill and a style that emphasized a machine built to test a product to its limits.

A streetable drag-style machine was what they came up with, something that would catch the eye and also be a beast at the traffic light Grand Prix. A Fat Boy sure does make an impact, even in standard form, but it was never going to stay that way for long. “We stripped the bike down to bare metal, and tried to shed the maximum weight by taking all the fenders off and all extra parts that are not needed.” And with the Fat Boy living up to its name at a massive 700lbs, losing as many of them is vital.

With the pounds shed, the guys wanted to give the bike a lightweight look and nothing sets off that vibe and helps to convey a race machine look like the use of carbon fibre. Both the huge front wheel and the wide back end have been fitted with custom carbon fibre covers, that give them an aerodynamic appeal. Of course, that is only further improved and amplified by the scary to the rest of us move of drag racers, ditching the standard front brake setup for less aero interference, and to reduce unsprung mass.

“We then started the mould for a new tank that we felt was small enough for the city lifestyle but gave the length so that we can have it slim and narrow to give the racing stance look that it needed.” At the front, the new metal has a similar shape to the stock tank, but it’s at the rear when it really begins to narrow and the knee dents allow the rider to tuck in out of the wind. A new seat post was added that comes off the backbone so all the metalwork at the rear could be ditched and a beautifully stitched seat was sewn up for the rider.

The vibrant stitch colour used over the leather is replicated in the paint on the tank, with the predominately black piece broken up with dark blues and greens and a very subtle ‘Cupper’ logo; this is no OCC over the top advertisement kind of bike. The rest of the bodywork is rather unique, with the lower half of the engine enclosed by an extended belly pan that wraps all the way around the front of the bike, while still allowing air through to the oil cooler and front cylinder. This piece is finished in a satin black with a gloss hue used on the triangle patterned graphics.

Being a bike built for testing and showing off a new oil, the engine was always going to be an important part of the build. So to really give the crowds something to look at, a Clarity Cam Cover was chosen to show off some of the mechanicals splashing in oil. The part from Roland Sands Design is also complemented by one of the American’s clear air cleaner covers and another clear cover for the clutch. To finish off the engine and give it a true Harley howl, a set of two into one high pipes dumps gases out of a screaming single muffler.

To get the rider in the right position for a drag race, the controls have been changed to mid-mount, instead of the laid back larry look of the forward controls and footboards. The bars also get the drag treatment, low risers holding a set of custom built bars with enough back sweep to allow for comfortable control. To finish the build off, the lighting has been reduced to a set of mini rears and a slick LED headlight with built-in indicators. And the bike had only been finished for a mere moment when it hit the streets of Kuta to test out its chops.

Check out the back tyre and you can see the boys really have been having some fun and their oil selling clients are just as pleased, with the only smoke coming from this SG build pouring off the rear rubber!