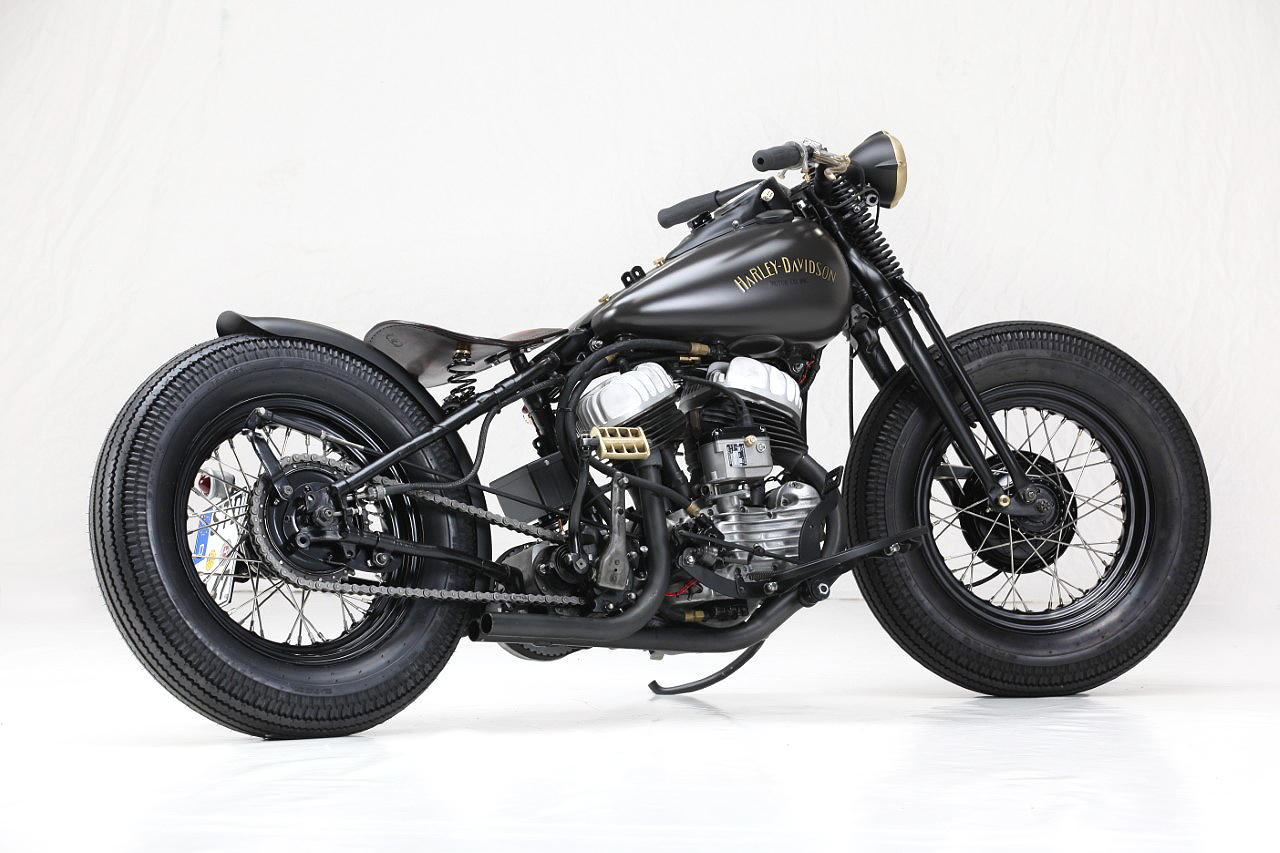 ‘You’re never too old…’ that’s where the quote should end, because time and again, no matter what the endeavor, human beings prove that you’re simply never too old or past your prime to give anything a go. Sadly in the motorcycle world, too many people are sold the false belief that if you don’t start young, then you shouldn’t start at all. Well, your honour, here we offer up Exhibit A as proof positive that learning to ride or build bikes is something you should simply not delay. As family man Stephan from Germany delivers up this stunning home-built 1942 Harley-Davidson WLA Flathead Bobber.

“I work as a Project Manager in a medium-size machinery factory. My background is actually electronics engineer.” Stephan who hails from Hamburg tells us. He’s always held dreams of owning a Harley and lusted after Milwaukee muscle for as long as he can remember, so back in 2015 and then aged 34, Stephan decided it was time to get his motorcycle license and learn to ride. But rather than buy a little 250cc machine, he chose a Sportster 48 as his first bike and quickly settled into the V-Twin lifestyle. A lifetime member of the Forty Fivers Motorcycle Club, the Sporty was given a brief custom overhaul and it was time to move on.

Next on the list was a Softail Slim, and this too had the spanners spinning, as it received an old school bobber make over. But all the while Stephan knew where his heart really lay and the hunt was on for a true vintage machine. “The idea was born to take the challenge and do a complete rebuild of a Flathead. I read a lot and became even more curious but also a little respectful. Luckily enough I found a good basis close to the Hamburg area. The seller didn’t hardly ride since oil seemed to be an issue. Well, nothing special in the age of 70+. I thought this will probably be just the start of several challenges to come.”

Quickly that more than seven-decade-old bike was pulled down into every last individual piece and the build process began in the garden shed. The frame was sent out to a local firm to be sandblasted and powder coated. But with his precious metal gone, Stephan realised he really wanted to do it all on his own. So he purchased a bunch of quality tools, a lathe, sandblaster, some kitchen ovens for baking, and then a second compressor after the first ran a little too loudly for the neighbours. Soon he was blasting and coating his own parts and the results speak for themselves.

To solve the oil issue and any other mechanical problems that may await, the entire engine and transmission were overhauled and rebuilt. New pistons slot into the perfectly honed bores and when a small part couldn’t be found, the new lathe was spun into action and with some trial and error, the replacements had that factory feel. The engine was given new paint and a polish and a Fairbanks Morse Magneto slots in, having arrived via airmail from the USA. While on the other side of the 45 engine, a new Mikuni carb controls the fuel flow.

Along the way the bike was moved first into the garage from the garden shed, and finally downstairs in the main house. A nice place to work in the cold of winter, but a bit of a bugger dragging it back up those stairs at the end. Speaking of things that look easier at first, Stephan had to get his head around riding a jockey shift and foot clutch, but the way it’s pieced together is picture perfect. The blacked out boards and pedals effortlessly form part of the background of the bike without standing out, while the white ball shift knob takes pride of place and falls easily to hand.

Preparing the metalwork was a massive task, with that old paint never easy to get off and often requiring hours to remove it from the welded seams. But with the fuel tank and rear fender looking picture perfect from all his hard work, Stephan decided to outsource this part of the process and invest in a professional paint job. The flat black looks simply incredible and is complemented by the gold decals that picks up the colour of the bronze ringed headlight and sprinkly of bronze parts across the bike in just the right amount.

To match the look, Jimi at Spirit Leather stitched together the perfect old school seat onto a base and supports that were made by Stephan. Who also didn’t shun the task of converting the bike to a 12v charging system with a new generator, low voltage regulator, and a special battery for the task that hides in a perfect homemade box. The low bars are custom made and the controls are from Kustom Tech, who make some of the best bits of gear in the business. “Finally the bike was tested and approved by the German TÜV and nothing could stop me from my first official little tour.”

Understandably Stephan has a smile from ear to ear, with 13 months invested into his beautiful bobber, it’s a dream to ride and looks just as good too. Thankfully his wife and daughter support his new found love affair and that decision to learn to ride is paying off even more by the day.