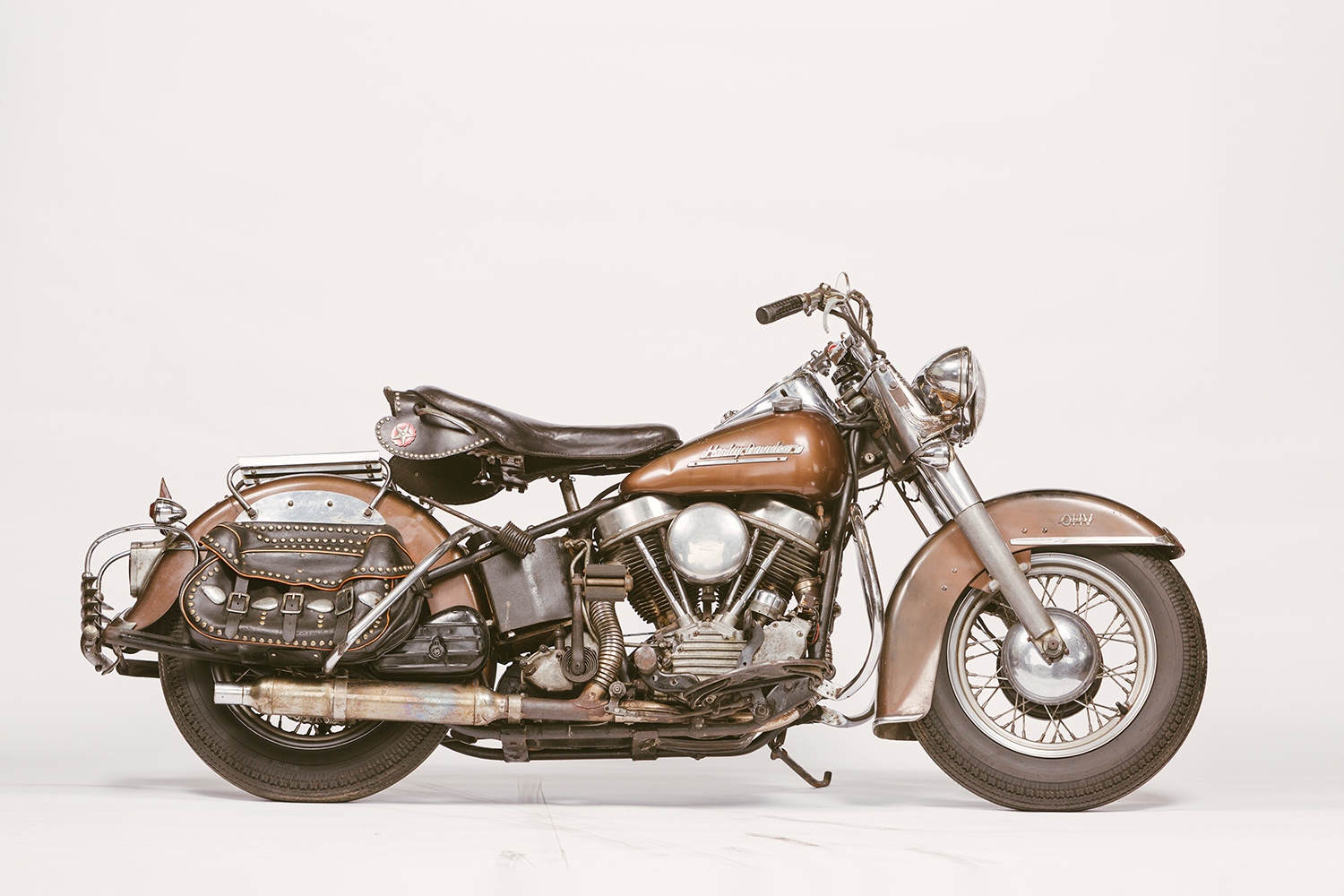 Nearly everyone has their own definition of the ‘American Dream’, but the original meaning was not a dream about individual wealth; it was a dream of equality, justice and democracy for the nation. The unfortunate reality was, however, that there was a time in the 1950s when there were barriers in place for people of color to do many things, such as buy their dream motorcycle – even when they had the means to do it. These were unprecedented times in America’s history. United States soldiers were fighting against communism in the Korean War while, on their own soil, racial tensions were heightened; one of history’s most well-known Supreme Court cases, Brown v. Board of Education, centering around racial segregation in schools, was taking off. The case became a cornerstone of the civil rights movement during a period where the country’s values were in question.

At the same time, it was also a pivotal time for the economy, as the country was recovering from the Great Depression and World War II. The more materialist ‘American Dream’ was starting to feel like a reality. The manufacturing industry was booming and providing many with well-paying jobs – people had more money than ever before, and they wanted to spend it. Cars, motorcycles, homes and consumer goods were being bought like they were going out of style.

In 1952, North Carolina’s Melvin Graham found himself at the intersection of these two realities. “It wasn’t culturally okay for African Americans to ride or own motorcycles in those days,” explained Derrek and Casey Graham, Melvin’s sons. “It just didn’t happen with the way things were. But, Dad saw the Harley-Davidson motorcycles used by our military during World War II and decided that he really wanted one,” Derrek continued.

Melvin worked at Freightliner in Charlotte, NC, after coming home from the war and, thanks to much hard work, had the means to buy his very own bike. Despite the cultural boundaries in place as an African American, he figured out a way to purchase a brand new 1952 Harley-Davidson FL Hydra Glide from Creech Motorcycle Company, a Harley-Davidson dealer in the Queen City.

Not only did Melvin want his very own brand new Harley-Davidson, he also wanted one with the latest bells and whistles. The bike featured new foot-shift and hand-clutch technology and was adorned with a special, one-year-only color, Bronco Bronze Metallic paint.

“We can remember listening for him to come home on that bike,” the sons told us. Their family lived roughly a mile away from Freightliner’s facility and they, as boys, would sit outside listening for the faint thump of that Panhead rolling down the street as dad rode home.

“For him to own and ride that motorcycle around town at that time… man… that was BIG,” Derrek exclaimed. Melvin rattled people’s perception of racial barriers by owning that Panhead and helped forge a path for the next generation.

It wasn’t long before the boys both learned how to ride their dad’s Panhead and Casey, the younger brother, caught the same motorcycle bug as his dad. Eventually, as time passed, thanks to his father and others like him, Casey was able to buy his very own motorcycle. In fact, to this day, he proudly rides and represents his club on his jacket while sharing old stories.

But as for their dad’s ’52 Pan, the motorcycle was eventually parked in a shipping container near Charlotte in the early ’90s, although it still remained part of the Graham family. In recent years, as Melvin’s health began to decline, the family decided to sell some assets, including the ’52 Panhead which had been sitting under a leaky roof for the past three decades.

That’s where Prism Supply comes in. As a fellow Charlotte native and bonafide vintage Harley-Davidson enthusiast, Prism Supply co-founder, Jake Hindes, helped the caretaker of Melvin’s assets assign value to some of the motorcycles he was tasked with selling for the family last year.

After expressing interest in purchasing the Panhead for himself, which was described as a “pile of rust” at the time, Jake patiently waited for a verdict from the family. Jake knew the motorcycle was in rough condition and buying it would be a gamble, but there was also something clearly very special about the motorcycle. The cultural significance of Melvin’s ownership makes this particular Panhead a symbol of the Civil Rights movement and of African Americans’ right to own and ride motorcycles of their own.

After considering how they felt about Prism Supply becoming the new owner of their dad’s motorcycle, the family and caretaker decided to sell the bike based on the plans for it. “We see ourselves as the custodian of a piece of history. We don’t want to change a thing,” Jake explained. “We want to preserve the bike by performing a mechanical restoration, while leaving it untouched – just how Melvin had it.”

Once the Panhead got placed on a lift at Prism Supply’s shop at Camp North End in Charlotte, Jake and the team, in conjunction with DicE Magazine, started work on the bike which was soon named the ‘Bronco Bronze’ after it’s very rare 1952-only paint color.

Derek Fearheiley, owner of Duane’s Powertrains, expressed his hesitancy based on the rusty exterior. Nervous about the possibility of the engine running again utilizing original components, he broke the seals and exposed the Panhead internals for the first time since production. Amazed by the original craftsmanship, he quickly realized that everything was in pristine condition and saw the path to having a running engine again. Derek stated, “I have never seen an engine in this good of a condition and I’m not sure I ever will in my lifetime.”

While Derek operated on the Panhead, Ben’s V-Twins helped by rebuilding the transmission using all of the original internals as well. And, although an aesthetic restoration wasn’t in the plan, Dean Micetich, with DicE, helped revive the 69-year-old Bronco Bronze Metallic paint that graced various parts of the entire motorcycle to ensure that the motorcycle looked the same as when it was parked in the ’90s.

Meanwhile, the rest of the team tore the motorcycle down and meticulously cataloged every piece of hardware in order to reuse the factory parts. A few pieces had to go due to the complete inability to salvage the part. A good example of this is the wiring – it was all original, but so brittle it couldn’t be reused. So, vintage style wires were sourced for the entire bike to ensure reliable and safe functionality.

In addition, the speedometer was mechanically restored by John Bordas, while Prism rebuilt the windshield using the good parts from two separate ’52 Panhead windshields. The rusted wheel spokes had to make way for some NOS spokes and the wheels were wrapped with some fresh rubber from Coker Tire. Thankfully, the team was able to tap into their friends, Matt McManus and Rick and Ramsey Allen, who helped tremendously by identifying and providing various parts.

After three months of late nights and what felt like endless labor hours from the team, in April 2021, the 1952 Harley-Davidson FL Hydra Glide that Melvin Graham helped change history with started up again under its own power for the first time in over 30 years.

With the family in close communication, Jake and the Prism Supply team are coordinating a reunion so the brothers and family can see the Bronco Bronze breathe again in the same city it originated.

As for future plans for the motorcycle, Jake’s intentions are clear: “This motorcycle will live on and continue to represent Melvin Graham’s legacy and his impact on the motorcycle community and our country’s culture as a whole.” The bike is exactly how it was when he proudly rode it around town – even down to Melvin’s Freightliner employee parking pass nestled in the windshield.