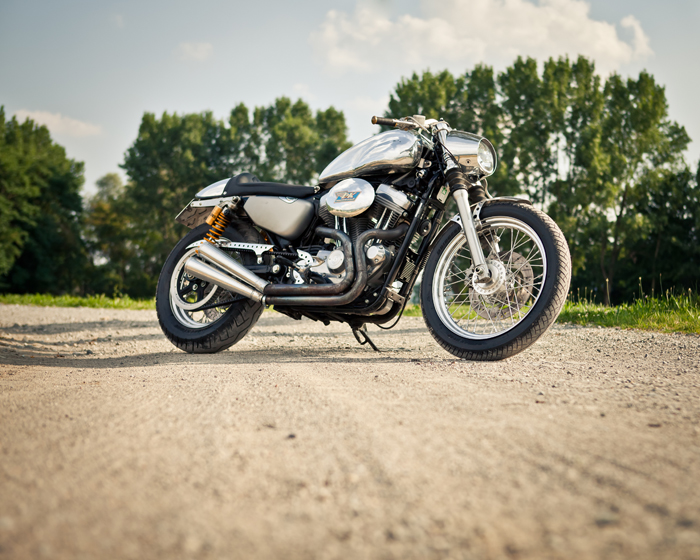 If someone asked me to recommend a bike that would make a great cafe racer, a sportster wouldn’t be high on the list. Actually, it probably wouldn’t even be on the list at all. A young German bike builder living and working in Switzerland is trying to change that. Christian de Kant from DK Motorrad has been building bikes since he was 17, which might sound like a long time until you find out he is now only 22 years young. In this relatively short time he has built some very impressive bikes. He usually builds custom bikes based on old-school frames from the ’40s and ’50s. But his love of Harley’s and cafe racers has led him to develop his own mass produced bolt on kits for 2006 and up Sportsters. Christian was inspired by the many ‘bolt on’ parts that can be found on Japanese bikes and thought: “why not do the same for sportsters?” So Christian did a bit of research and found a company in Italy called MAS Engineering that could mass produces the parts he designed. Looking at MAS Engineering’s website, these guys are no newcomers in manufacturing aluminium parts – they make parts for most brands of motorcycles. The DK Motarrad Cafe Racer kit consist of tank, seat, exhaust, front fender, pinion cover, belt cover, handle bars and fairing – and everything is made from high quality aluminium.

Whether or not you like the look of this Harley Sportster cafe racer, you have to give Christian credit where credit is due. To design these kits and have the tenacity to follow through with getting them manufactured in larger numbers is a real testiment to a guy of his age (meanwhile we’re still struggling to print a few more more pipeburn t-shirts). We have a feeling we’ll be hearing more from this ambitious Deutchman in the years to come.

You can check out the complete range of parts at the DK Motorrad store. PS. The more attentive of you will have noticed that DK Motorrad is also a brand new sponsor of Pipeburn. In the interests of full disclosure we’d like to state that Christian’s support of us had absolutely nothing to do with us choosing to featuring his bike; we just thought it was pretty damn sweet. As you were.