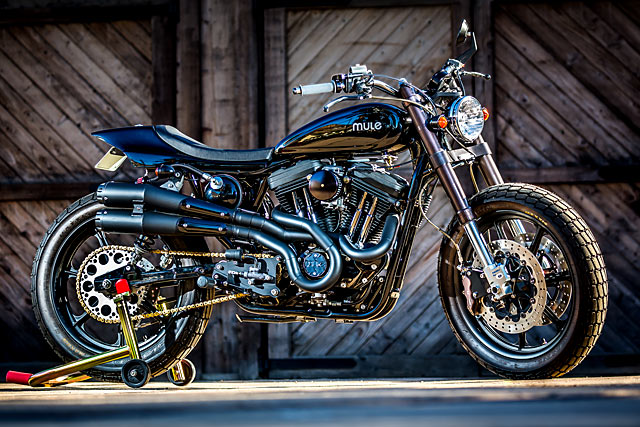 San Diego’s Mule Motorcycles know exactly what they’re doing. They nearly exclusively produce performance trackers. And not just trumped-up backyard jobs. Every single one is a masterclass in proportion, style and, ultimately, performance. There’s lots of people trying to do what Richard Pollock produces and none can come close to the exceptional work he does. Exhibit A: The latest bike from Mule – a 1991 883 Sportster dubbed ‘Rupert’s Ride’ that puts the ‘Sport’ back into ‘Sportster’. Don’t get Richard started on what passes for a street tracker these days. ‘That term gets thrown at all sorts of builds that have absolutely no link to dirt track or high performance,’ he says. ‘It’s an overused style description which has diluted the true meaning.’ Rupert’s Ride is, in his opinion, pretty close to what is a true street tracker. ‘I’m no authority,’ he adds, ‘but having attended many flat track races, competed in hundreds and having studied the machinery since the early 70’s I’ve formed a vision of what one should look like’. He’s being modest. He is an authority. And he’s got a host of bikes under his belt to prove it. All of which are as detailed and gorgeous as this. Understandably, his work is in high demand. ‘I had three orders for Sportster street trackers at the same time,’ he explains, ‘but I could only find the one donor Sportster locally. So two came from Barnett Harley Davidson in El Paso, Texas’. The bikes were delivered to Mule and torn down right away. The only thing retained would be the main frame, swingarm and lower end of the engine. The decision to use the standard frame is a strategic one. ‘I’ve done a few Sportsters using just a motor and sourcing aftermarket frames,’ Richard says, ‘the builds were complicated and a hassle to register. So I’ve started gravitating towards retaining the stock frame, increasing modifications for weight reduction and improved mass centralisation’. So with the bike completely stripped down Mule bought an all new Harley Screamin’ Eagle top end and cams and sent the bottom end to Darkhorse Crankworks in Wisconsin for new rods, bearings, seals and balancing. They then cut the back half of the frame off and moved the shocks forward six inches. The swingarm was also lengthened.

One of the biggest difference between a standard Sporty and Rupert’s tracker is the suspension and brakes. The bike now has Paoli USD forks in custom triple clamps and is brought to a halt by some whopping 6-pot calipers taken from a MV Agusta F4. One of the neatest touches on the bike is the front master cylinder designed in-house. It was machined by the team to fit a Yamaha clutch cover window at one end with a small fitting out the bottom and screw in the top for filling. I haven’t seen anything like it before; it’s about as neat as you can get.

[superquote]“One of the neatest touches on the bike is the front master cylinder designed in-house.”[/superquote] Everything else about the bike is typical of Mule’s no-compromises approach to bike building. It’s got a gorgeous set of 2-2 high stainless pipes that have been ceramic coated black and bend perfectly around the bottom end. The tank is aluminum, the bars are Mule’s own design and instrumentation comes via Motogadget’s tidy Chronoclassic. The blacked-out colour scheme is a bit of a topic of contention with Mule. ‘I’m not a fan of murdered out, all black bikes,’ Richard says, ‘I think it’s been done to death in triplicate. But that’s what the customer requested’. The red stripes were added down the centre as his own little ‘strike against the empire’.

Rupert’s tracker is the culmination of every lesson learned by Mule Motorcycles over the last twenty years. ‘It’s user friendly, lighter than stock, better brakes, better handling and much faster,’ Richard says. And better looking. Much better looking than the fat ol’ Harley cruiser that it started life as. The best thing about the bike? ‘Riding it fast!’ Richard explains, ‘The sound is why everyone needs to build or own a Harley with cams and high dual pipes!’