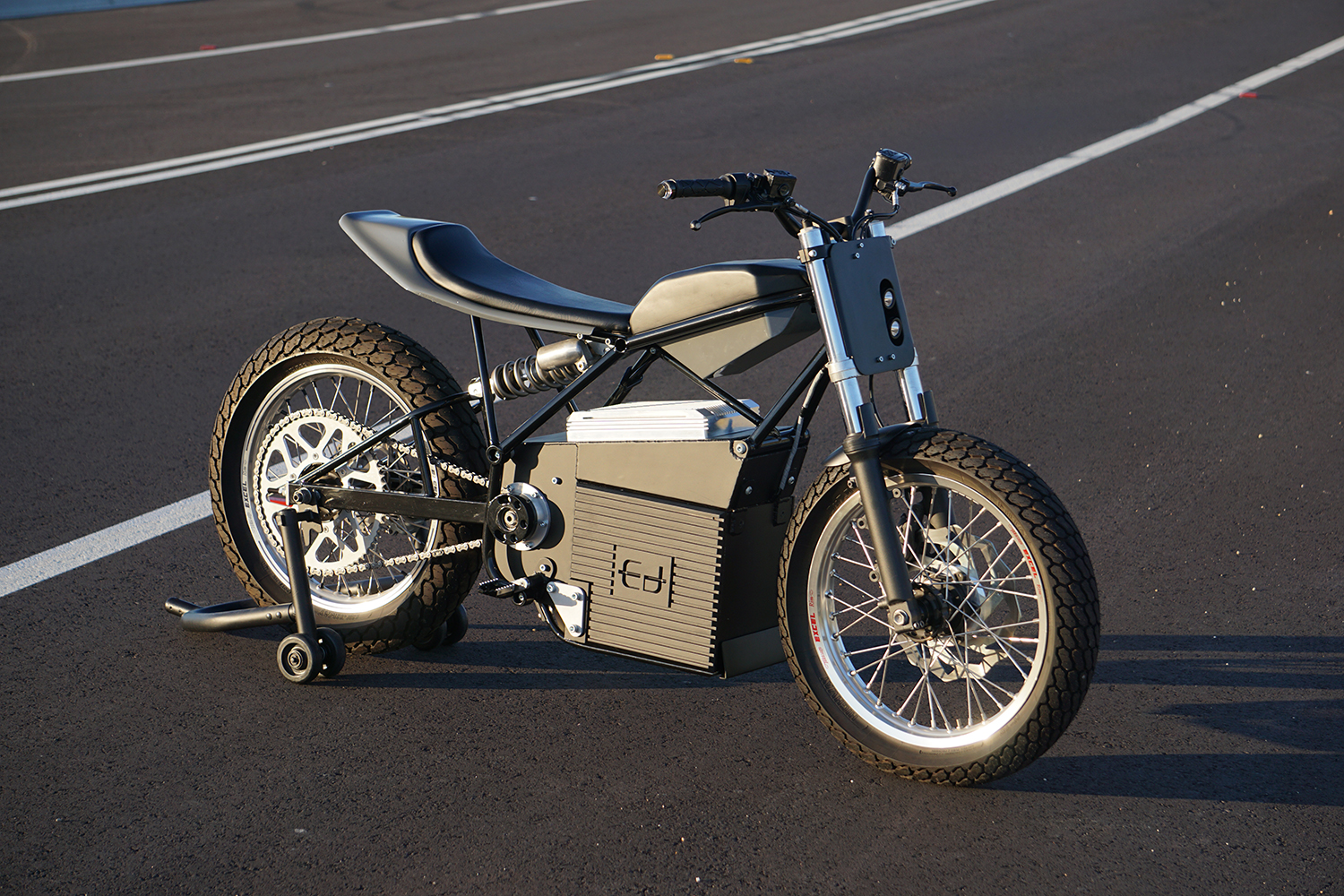 While the global economy has been in free fall, electric car manufacturer Tesla has seen its stock price go through the roof. Their cars are now a global phenomenon and they’re lightning fast too. So why haven’t electric motorcycles been the same? The styling on most is awful and without the performance to surpass their petrol competitors, few buyers are willing to jump ship. But Australian Toby Roberts of Ed Motorcycles has thrown his hat in the ring and come out swinging. Forget new age styling and plastic fairings, he’s matched the cool lines of a flat tracker with legitimate superbike performance. Known as Concept Z, this is the way a motorcycle should be, brilliantly engineered, mouth-wateringly fast, and packing a big hit of high voltage rock n roll.

With school behind him, Toby joined the RAAF and earned his trade as an aircraft technician working on FA/18 Hornet Jet fighters. Clearly feeling the need for speed he bought two single seat buggies and kitted them out with litre sportsbike engines they were nothing but fun in the legendary sand dunes of Stockton. But everything changed when it 2007 his brother showed him a video of the electric car record holder, a Datsun known as ‘White Zombie’. From here on it would all be electric, first one of the buggies, then a road legal Honda Civic, bicycles, and the mighty postie bike all got conversions. But to do two wheels justice he knew he had to start with a blank canvas and with more torque than a brand new Ducati Panigale V4S, Concept Z is the real deal.

As Toby explains, “The bike was designed and built in three major components: The frame, The body box and the battery.” The frame itself is made from 4130 Chromoly and is a ground up design that utilises CAD modeling to set out the pick up points. Before a number of custom jigs were built to allow Toby to tack it together before an ex aircraft welder did the complete TIG weld. The motor mounts, motor adapter, frame pickup points, Swingarm pivots and headtube bearing cups were all CNC machined by Melbourne based company Flexicut. It might look simple to some, but this modern framer is a seriously trick piece of kit.

The swingarm followed a similar process, is fitted with CNC’d axle blocks and then along with the frame was finished in powder coat. The body box was next on the list and like many a Ducati serves as a stressed member. This too was drawn up in CAD before each piece was laser cut from 6061 alloy and then tig welded together. “The motor is mounted to the frame by an elaborately designed CNC’d adapter which performs three functions. It holds the motor securely in place and concentric with the swingarm pivot, allows the swingarm to pivot through its full degree of motion and provides an additional thermal mass for improved motor cooling,” Toby tells us.

There is also a cleverly hidden air duct that rams cool air at the front of the motor, which is a Zero 75-7R unit. “This is an air-cooled, radial flux, interior permanent magnet brushless motor which is setup to deliver 52kw peak output and 157nm of torque at the shaft.” Those are big numbers, but being the clever man he is, Toby’s design allows for even more powerful motors from companies like Emrax to bolt right in. Heat is the enemy of both the motor and controller and more clever engineering means no water cooling is needed that would only complicate things and take away from the clean lines. The motor controller itself is a 775 Amp Sevcon Gen 4 Size 6 and is mounted within a custom designed and CNC machined aluminium heatsink for cooling.

The heat sink is then mounted to the top of the alloy body box to further improve cooling by utilising the large surface area. Built-up in house the battery unit uses “123 AMP20 pouch cells. The pack incorporates high current PCB and copper terminals, supplied by Chris Jones at Voltron motorcycles in Perth, Western Australia, with a fully sealed polycarbonate enclosure, aluminium housing, and CNC machined side cooling plates.” The battery is positioned low and forward for perfect weight distribution and is set up to accept new technology as it comes to market with minimal changes. With a high-quality handbuilt frame and the weight in the perfect place, the next port of call was getting the suspension right.

For the front end Toby selected a Yamaha YZF-R6 setup and the traditional style forks are among the best to use with an array of aftermarket parts coming from their success in the racing world. At the rear, he did his research again and came up with a “Honda CR85 rear coilover shock with shortened clevis and 38n/mm spring rate.” The wheels are custom laced SM Pro Hubs with 19” Excel rims front and rear all wrapped up in Mitas rubber. With disc brakes front and rear calling a halt to the show for the perfect package. The tank is of two-piece construction, the lower is TIG welded alloy and includes a storage space for a wallet and phone.

With the top composite half eventually set to hold the digital display, Toby is currently taking feedback on the final shape, so feel free to offer ideas in the comments section. Fitting the style and giving the rider the perfect place to sit, the Knight style seat unit is fitted with a hand shaped high-density foam perch, covered in marine grade vinyl. The flat track theme continues with the front number board modified to accept a pair of twin LED lights. While bar end indicators and an LED taillight setup finishes out the minimalist look perfectly.

So how does she go? With a 65T sprocket from Extreme Creations in Sydney, Concept Z will cover 0-100km/h as fast as anything on the road and still have enough to hit 150. The end result is everything an electric bike normally isn’t, well-engineered, classic good looks, fun to ride and as quick as any factory superbike offering; where do we sign.