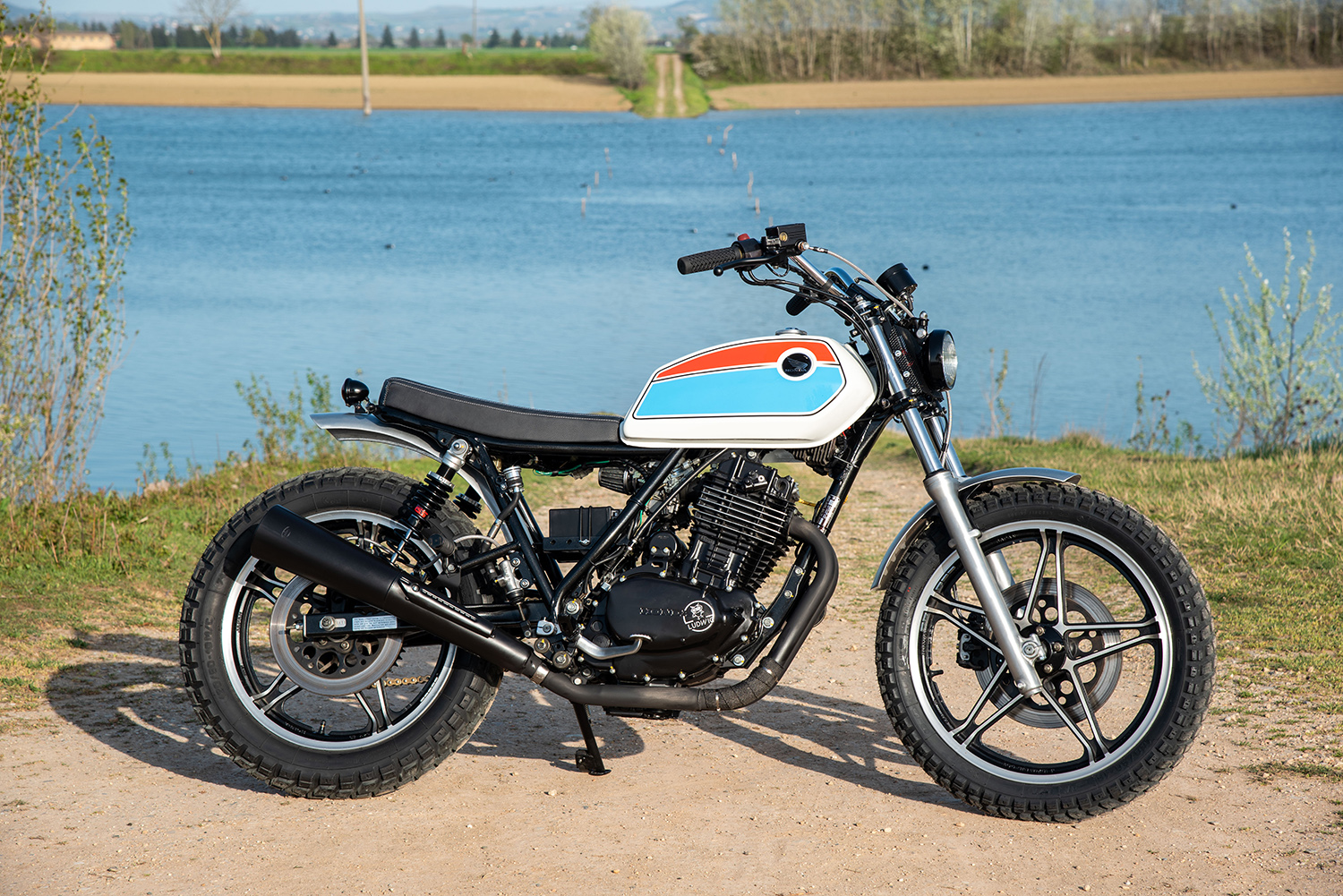 When it comes to the Honda Ascot FT500 it is largely a case of the right motorcycle at absolutely the wrong time. A cheap single-cylinder bike, with a simple steel frame, that is infinitely customisable and named after a famous dirt track in California. Today it could easily fill the void for those who don’t have Indian FTR 1200 kind of money. But, in 1982 when it was released, the bike was a total failure. As multi-cylinder bikes took off and fairings were becoming the thing, the little Honda was a flop. Thankfully Riccardo Casarini, the founder of Ludwig Motorcycles shows us what could have been, delivering a stunning FT500 for the perfect mix of dirt and a daily ride.

Born in the town of Voghera, Italy, Riccardo has had quite the journey with two-wheels, riding an Aprilia Tuareg Rally 125 at the age of 13, wrenching on old wrecks, studying philosophy and penning a thesis on the “Aesthetics of Speed”. Before he headed off overseas and lived in Spain working at a custom motorcycle shop and writing for bike magazines, before he decided to head home and open up his own garage under the name Ludwig. There is a clear style that has emerged from his craft, fun bikes with a funky style and utterly usable, and the FT500 is no different.

“The current owner, a young creative girl, ‘surf culture’ enthusiast, wanted to get a compact and minimal bike, ideal to be transported even during long journeys with the van,” Riccardo explains. So the FT was straight up onto the workbench and stripped of its ugly ’80s plastics, tank and huge seat, allowing the builder to step back and imagine what could fill the void. With a plan devised and the young lady signing off, the frame was the first to go under the knife with a bunch of tabs removed and the subframe cut and a new hoop welded in.

With the frame smoothed out and cleaned up, it was first sandblasted and checked for cracks before being given a brand new coat of gloss black powder coat that also extends to the swingarm. Next, he had to find a way to hide all of the electrics and the battery that had once found a home under the big factory seat. So a tray was shaped to fit between the frame rails, with all of the little tabs and brackets to hold things neatly in place. Then, where the airbox had once called home was transformed into a battery box and it too hit with the powder coat.

Knowing that this bike would fling rocks, generous alloy front and rear fenders were shaped to suit and mounted on a custom bracket at the rear and the factory unit, modified, at the front. But the major visual transformation comes in the form of the Zundapp 125 tank that Riccardo felt gave the bike the distinctly old-school flat track look it deserved. But first, he had to work his magic to ensure its metalwork was straight and no gas was going to leak from its aging steel. With the spray gun in hand, he gave it a coat of brilliant white before laying over the “soft” colours and Honda badge.

Being a bike that was to be ridden, the seat leans more towards the scrambler style of the ’60s and starts with a Honda VTR base. With it shaped to fit the FT frame and with the look that was desired, it was covered in two layers of distinct foam for a comfortable ride and then wrapped in a Nubuck style leather, and stitched lengthways to really accentuate the old school style. Which only gets another boost with the swept back vintage Triumph handlebars and Vans grips. The small bates style headlight mounted against a flat grille and vintage taillight complete the look.

With the bike needing to function as well as its form, the front end was given a full rebuild that includes bearings top and bottom, with the forks modified and lowered internally by 100mm. To take care of the rear end and provide more stability, the combination of the YSS adjustable shock absorbers and reworked axle position gives the Honda 30mm extra in the wheelbase. Of course, a 40-year-old motorcycle has seen better days and Riccardo rebuilt the brakes too, with a mix of new Honda parts, Goodridge stainless steel brake lines, and Ferodo pieces.

Finishing off the mechanicals, the engine has been freshened up, given a new coat of black and the transmission rebuilt. A cloth spark plug wire and pod filter clean up the look, but perhaps the most interesting decision was to keep the standard exhaust system and bring it back to as new condition, in an understated matte finish, a homage to the original machine. To complete the build, new LED indicators were added, a small Koso speedo and the wheels wrapped up in dual-sport Heidenau K60 rubber. The finished result is the perfect bike for 2021, a tasty retro vibe, that’s more than capable in the dirt and still utterly useable as an everyday ride. If only Honda could go back in time, this is the Ascot they should have built.