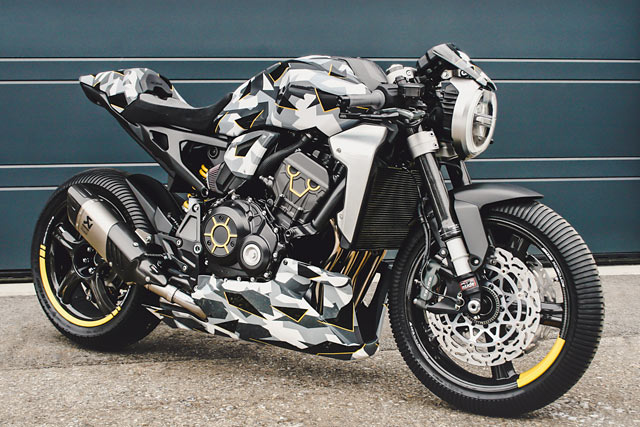 Blame Akira. Blame Blade Runner. Blame Daft Punk. Blame whoever you see fit because, yes, we do have a rather unhealthy obsession with the limitless future of motorcycle design. Bring on the electric engines, the electroluminescence and the artificial intelligence. Charge the holographic lasers and engage stealth mode. As Queen once said, “Here’s to the future, I want it all, and I want it now.” Taking Freddie’s thoughts to heart, Swiss supergroup Gannet Design and Fuhrer Moto have teamed up to kick off the Honda CB1000R custom scene and win a bike build-off competition while they were at it. 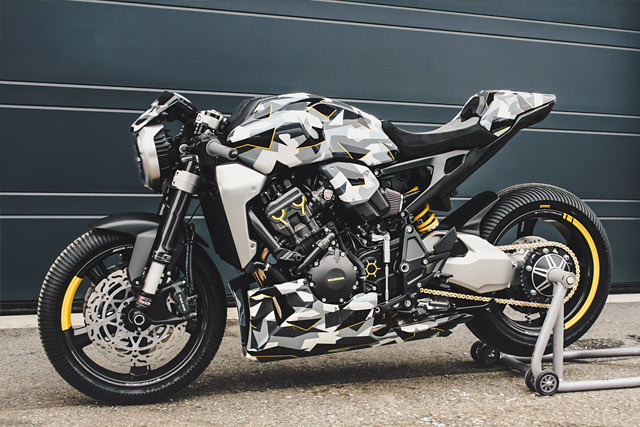 To start, let’s jump to the end. “This motorcycle is the winner of Honda Switzerland’s custom CB1000R competition, and was presented at the 2019 Swiss Moto Show in Zurich this February.” Now that we know how the story finishes, let’s figure out how they got there. Ulfert Janssen, Gannet‘s head designer, says the team’s aim was to produce a completely new look for the CB1000R Honda by changing the proportions and handlebar position, while leaving the basic components untouched to show the new model’s extensive custom possibilities. “And through a collaboration with 442 Corse, this bike has been fitted with some beautiful, high-performance carbon parts, too.” 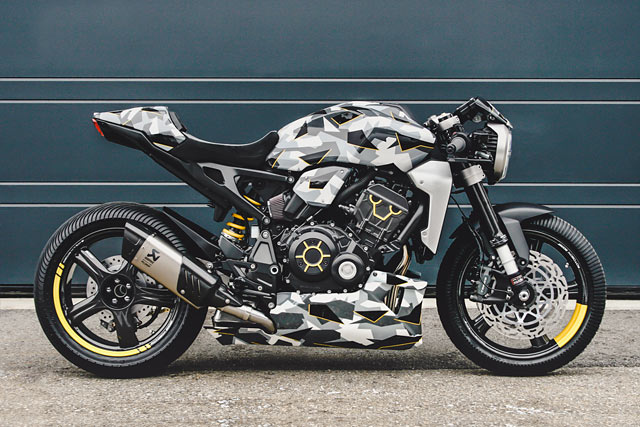 So while Ulfert provided the design chops, the bike was built by Stefan Fuhrer – a former MotoGP racing mechanic – and his crew at Fuhrer Moto. Their businesses are just 100 metres apart, so it is a perfect setup for working together to ensure that the finished bike looked every bit as cool as Ulf’s original concept sketches. With quite a few factory parts left in place, the design of the belly fairing really helps the bike’s stance and allows it to look remarkably different to the showroom model. “Many people underestimate the importance of balance and proportion in a custom build,” says Ulf. “Just by changing the stance, angles and position very slightly, you can get an entirely new bike.” 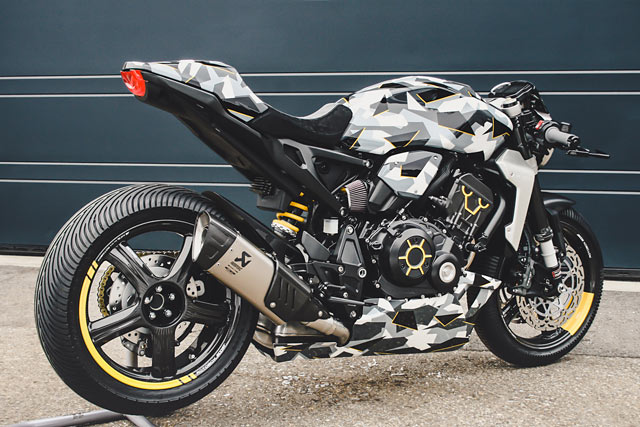 Stefan started the transformation in earnest by adapting and custom milling the triple clamp to make it lighter and more racy. Then he modded the belly fiberglass fairing according to the design. “For me, the front end is incredibly beautiful,” says Stefan. “Through CNC milling, we have created a new mount design for the front light and the mini windshield. The mods give this bike a very technical, cool look – like a Transformer in a Michael Bay movie.” Thanks to 422 Corse, the bike is now equipped with an ultralight CeraCarbon Racing front-fork and custom-made sprockets. The fork is designed and constructed in carbon-fiber with Dyneema and a unique, patented ceramic technology. It’s 75% lighter than a conventional set-up. 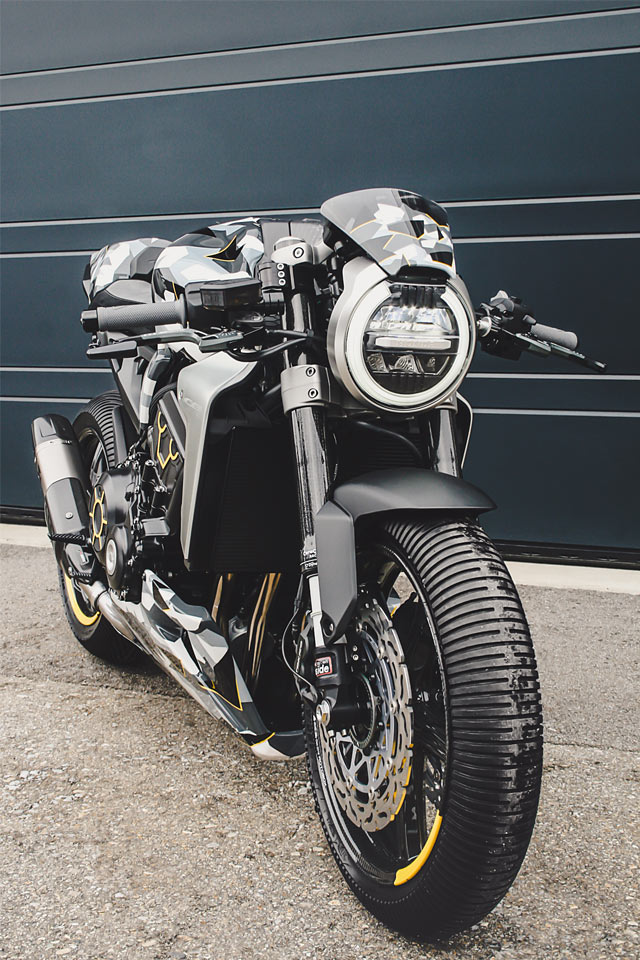 [superquote]“Rotobox went the extra mile and made the rims from scratch to meet the tight deadline for the 2019 Swiss Moto show.”[/superquote]

The wheels are similarly space-aged; they are high performance carbon fiber wheels by Rotobox. They are up to 50% lighter than the original rims and are the world’s only one-piece carbon monocoque wheels. With the special help by Dario at 442, Rotobox went the extra mile and made the rims from scratch to meet the tight deadline for the 2019 Swiss Moto show. With a 17×3.50 up front and a 17×6.00 at the rear, they were fitted with Dunlop Moto 2 Rain Tires, which also enhances the bike’s unique looks.

“For the clip-ons, ABM Fahrzeugtechnik equipped us with their Multi Clip ‘bars and some fine Synto Evo brake and clutch levers in grey and black to fit the color scheme of the bike. In addition, the motorcycle was equipped with K&N air filters for better breathing and an exhaust upgrade with a titanium and carbon fiber can by Akrapovic provides a really rich sound.” And while you may be suspecting that the bike’s camo finish is a transfer, it’s actually a paint work masterpiece by Walter Oberli who gradually built up seven layers of lacquer to achieve the final effect. 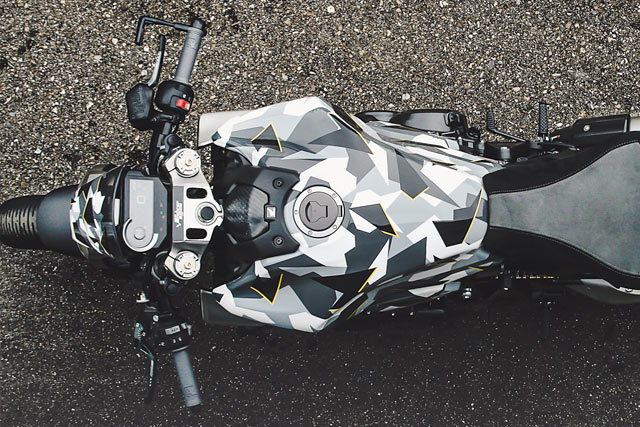 “The idea of the graphics was to reinterpret the camouflage design with highlights in yellow to make it modern and sporty,” continues Ulf. “These graphics, together with the sexy new proportions, transformed the tame CB1000R into a camouflaged rocket. And by using paint instead of transfers, we could control each single element and place it without any of the deformation you’d get by using foil. The result is very precise and up close, you can really see the impeccable work by Walter.”

To finish, Stefan gets a little artsy. “I found this build extremely inspiring. When I think back, it’s almost like a poem, or a story. I spent nights assembling parts only to take them apart again the next day because it was somehow not working. It is a gradual and difficult process to get the bike looking coherent. In the end, you can clearly identify the original CB1000R, but the lasting impression of our build is one that’s totally new.” If you like what you see, it will be making further appearances at 2019‘s The Reunion in Monza and at Glemseck 101 amongst others. 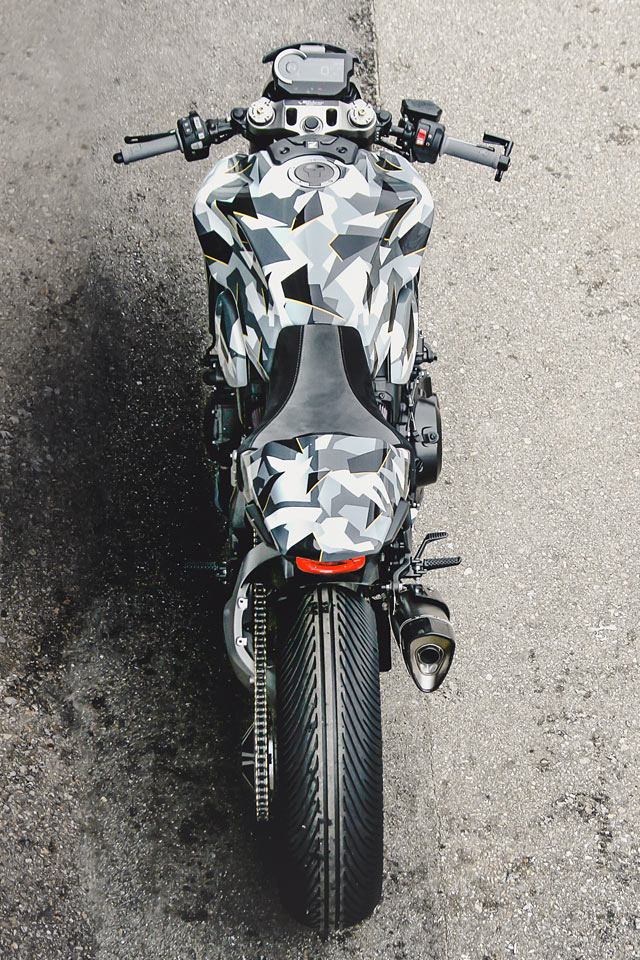