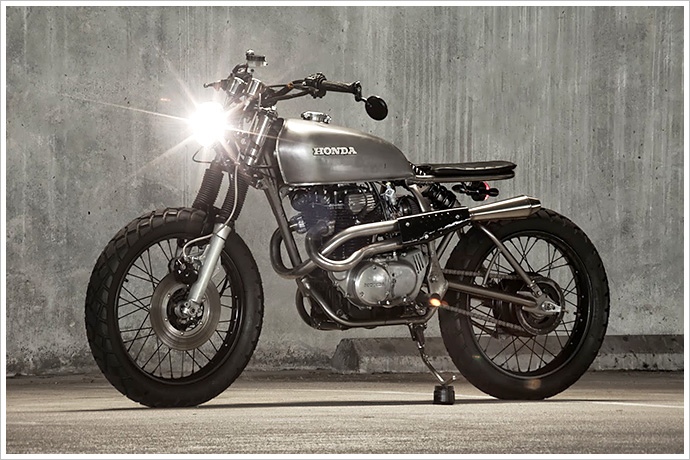 Simple and aggressive. This was the build brief for today’s feature bike, a bare bones scrambler Honda CB360. Built by Brandon Nelson, who up until two years ago had no real interest in motorbikes, let alone custom ones, but this is definitely a kick ass start to his bike building portfolio. Starting with a non runner CB he picked up off the internet, Brandon has created his first frame off rebuild – and we think he has created a truly unique little stripped back and minimalist mono motorbike. After picking up a couple of inoperative Honda motorbikes off Craigslist, one CB360 & one CL360, Brandon decided the CB would be the better base for the build, even though it was “in terrible shape”. Without a full theme in his mind, Brandon set a couple of concepts he wanted built into the bike. These included mono shock suspension, custom exhaust, full electrical overhaul, and a healthy set of tyres. According to Brandon, this would be a “challenging and interesting twist on the CB360 platform”. And interesting it turned out to be. An eBay purchase in the form of an RD350LC led Brandon to rethink his suspension arrangement. Although an RD style suspension setup would work on the Honda, the mono shock couldn’t fit in the frame, and clear the Mikuni carbs at the same time. This caused a change in the shock mount configuration which makes the bike rather unique. Brandon admits the term “nutcracker” has been thrown around alot in relation to the shock mounting, but defends his engineering by saying the ride is rather comfortable, and demasculation not an issue at all. In the engine department, little has been left untouched. The engine has been bead blasted, hi temp paint applied and the covers polished. The original camshaft and journals were looking a bit worn, so a ‘less beat up’ top end was sourced, the valves lapped and new piston rings fitted. The scrambler type exhaust headers come courtesy from a CL360, feeding into a Brandon special 2 into 1 header, exiting through a 12″ stainless reverse cone muffler. The gas tank on the CB, one of the few items with any presence on the bike, has been chemically stripped and polished by hand. The aesthetics of the gaunt frame of the bike is helped by the short flat track seat, perched atop 1″ pipe bent by South Bay Customs, one of the few fabrication jobs not carried out by Brandon. Not one component of the original electrical system remains, with a Chris Kenny custom harness in its place. Perched atop the flat tracker style bars sits an instrument cluster, housing a voltmeter. This is something Brandon wanted as the bike is only running a four cell Ballistic battery, and he wants to keep an eye on the power level. As for the compass, that is a bit more low tech but handy incase Brandon gets lost on the trails. With a few build ideas, and no set image of what the finished bike would look like, Brandon has been able to be flexible over the course of the build. His wish for a mono shock suspension came true, albeit through thinking outside the box in relation to engineering. A desire for both a custom exhaust and electrical system allowed the builder to neaten up the look of the bike, while adding to functionality. Finally, the bike rolls on Kenda K761 rubber, fulfilling the need for a healthy set of tires. Brandon’s ideas have all come together to allow him to have a bike that is aggressive enough to ride the trails on Sunday, then commute on the same bike to work on Monday – we just hope he is extremely careful while riding this nutcracker shock setup.