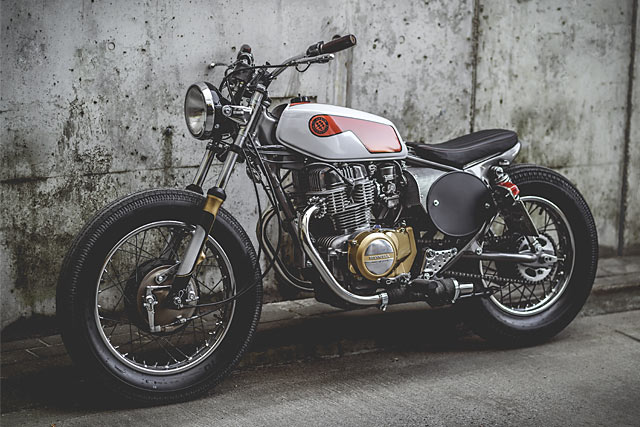 ‘Maximum retro’. That was Tomek’s brief to himself. And as the one and only member of Warsaw’s T.Jasin Motorcycles, he sure wasn’t about to be overruled. Having skirted around the style for many of his recent builds, he clearly decided to go all in to see what he could accomplish. Naming the bike after the old-school moto circus spectacle, his ‘Barrel of Death’ Honda CB400 has topped out on many more levels than just a retro one. Without a skerrick of pretence to belie his impressive build catalogue, the builder introduces himself. “Hi, I’m Tomek from Warsaw, Poland, and I like to build custom vintage bikes. The bike which I have chosen this time is a classic Honda CB400 from 1978 with its very reliable twin engine.” This particular model was imported from the USA, maybe inspiring Tom somewhat in his retro aims. “This time I decided to build a bike in a ‘maximum retro’ style. Apart from this, the main inspiration for the project was classic simplicity and high quality.” “I disassembled the bike right down to the last screw and thoroughly planned out the build. Secondly, I cleaned everything. Thirdly, I cleaned them again.” With the parts shinier than a hospital’s surgical equipment, Tom then reworked and cleaned up the frame before turning his attention to the bike’s beautiful spoked wheels and the matching front brake drum. “It’s the first time I’ve seen these wheels on a Honda CB with my own eyes; I matched them to a brand new set of classic Shinko tires.”

Next, Tom swapped the original tank with a smaller, vintage MX unit that was painted in muted grey and red colours and topped off with a shop logo. With a matching mineral grey chosen for the frame colour, a new seat with black leather was sourced with matching red stitching. “In some parts I mixed gold, black and silver colours for some visual interest. Then an aggressive set of handlebars and a svelte, plastic rear fender was bolted on. “Every custom part of the motorcycle was handmade, right down to the aluminum side fairings, short exhausts, drilled aluminium plates and the paint. But in order to ride the bike on the street, I needed to put the legally required plates and lights somewhere. In the end, I mounted a new black headlight up front and positioned the plates and its associated electricals on the bike’s rear left side.” Tom’s other cool smatterings include refreshed Honda brakes, modern (and much more simple) instruments and a seat made completely from scratch. “From the beginning to the end, I did it all except make the leather itself. I’m really happy with the results.” And he’s not the only one. But the sailing wasn’t all so smooth; Tom’s story of sourcing the bike suggests that there was some excitement involved. “I’m checking most motorcycle websites in Poland very often, but this is the first time I’ve seen a Honda like this. My decision was simple – I had to have it!” And for an impulse purchase, it was in pretty decent condition, needing little more than a regular service to replace the consumables. “All the electrics ran OK. So I just gave it some new oil, NGK plugs, filters and a chain.”

[superquote]“I’m checking most motorcycle websites in Poland very often, but this is the first time I’ve seen a Honda like this. I had to have it!”[/superquote] Sensing Tom wasn’t being completely open with us, we quizzed him to see if there was anything he was holding back on. “When it comes to reworking the frames of my bikes, I consider it one of the most important parts of the entire build. If you want a perfectly shaped bike, you need a perfect frame. But don’t ask me how; the proportions are my little mystery.” But how’s she go? While no earth-shattering modifications have been made to the engine, there’s enough spit and polish to see an estimated 40 rear wheel ponies. “The bike’s performance is on a similarly high level to the rest of the build,” notes Tom. “Nothing’s over the top, but everything has been done at 100%.” Any parting thoughts, Mister Jasiński? “In the end, the bike looks exactly how I wanted it to. When I ride the Honda, people give me the ‘good thumb’. This is the best prize for me.” Good thumb, indeed. And while that’s Tom’s best prize, you’ll probably agree with us when we say that we’d take the bike itself any day of the week.