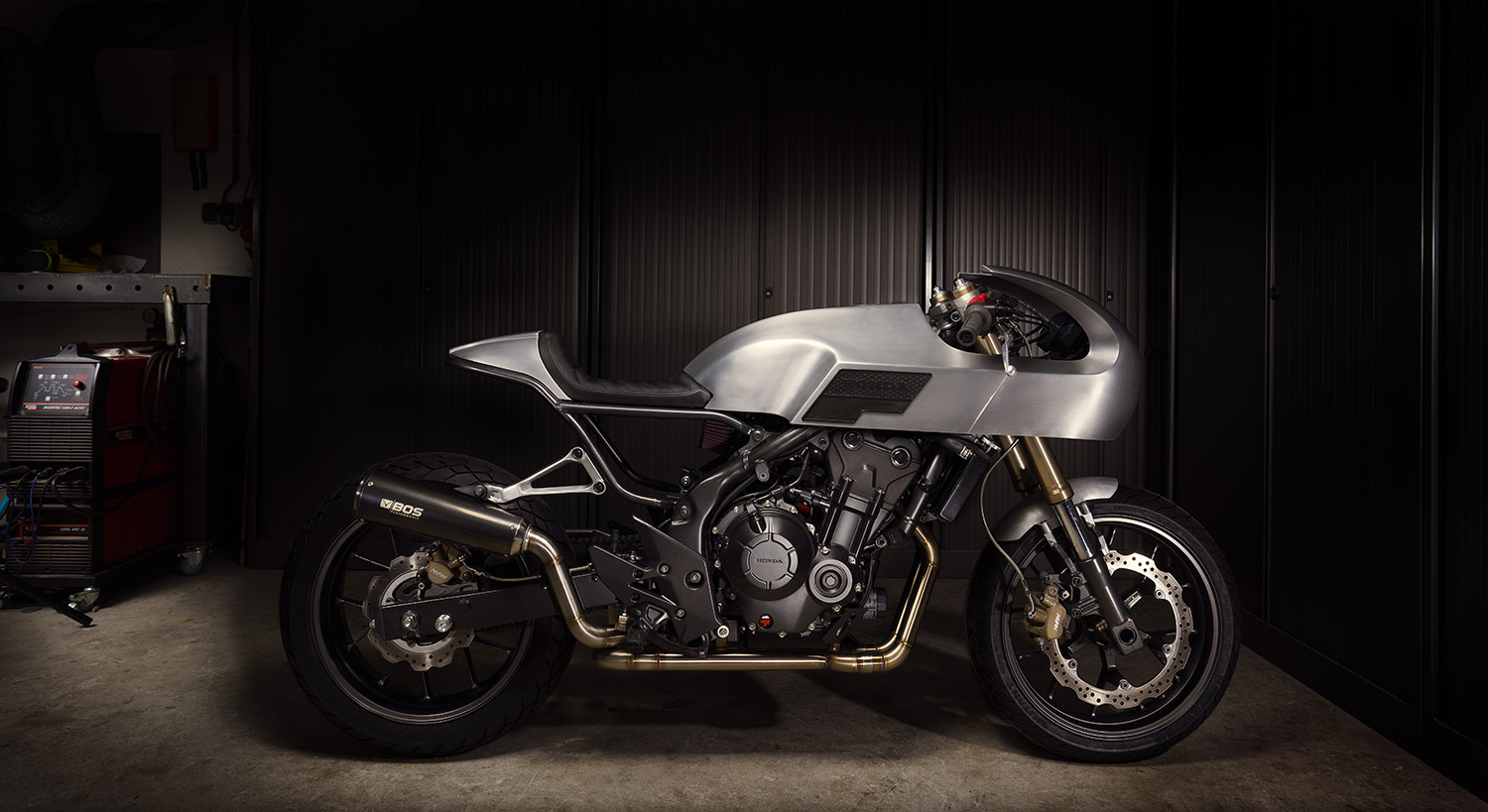 Sporting a sleek silhouette known throughout the world, few people on the planet wouldn’t recognise the ubiquitous lines of the ultra-capable F-16 Fighting Falcon. But pull back the layers and the 4th generation fighter is still a highly complex beast and with a price tag of up to $35 million, you have to know what you’re doing to spin the spanners on such a machine. Which until recently is exactly what Stefan van der Riet did by day while running the very successful Raw Metal Racers in his spare time. Now his immense skills are being moved over to a new aircraft, so to pay tribute to the machine that taught him so much, the flying Dutchman has handbuilt this incredible 2015 Honda CB500F ‘Fighting Falcon’ to both pay tribute to his beloved fighter plane and show off the talents it’s helped him hone.

From a very early age, Stefan was finding anything and everything he could get his hands on, to pull apart and learn about mechanics. At 12 things shifted from pedal power, over to mopeds and then to larger motorcycles and with a father who was just as into two-wheels as he was, it seems Stefan was always going to be around bikes. So, even as he commenced his career as a mechanic working on some of the most advanced aircraft on the planet, he was building his own custom bikes. Instantly people loved what they saw, and so to meet the demand that was coming in, he founded RMR as a side project to keep him busy outside of work.

Then recently came the inspiration for what would become the bike before you, “I chose to implement the design features of the F-16 because for 6 years I’ve worked as an F-16 mechanic at my daytime job. And a few months ago I switched to the AH-64 Apache Helicopter. As this was a personal project, I wanted to combine work, passion and my greatest hobby into this bike,” Stefan explains. “The bike is designed as a tribute to the F-16 Fighting Falcon. The hollow curves of the aluminium monocoque structure on the upper sides of the tank, apply to the same elegant lines of the semi-monocoque structure of the F-16.”

With its reliable engine, steel tubular frame and being relatively cheap to purchase, a good-condition CB500F was tracked down and Stefan could get underway. The process of customising the bike began at the front end and immediately you can see the skill he has and the precision with which he operates. To graft on a full front end from a Kawasaki ZX7R, Stefan didn’t simply change out the bearings and hope for the best. No, first he completely rebuilt the forks, then he machined his own lower stem, turned down the bottom yoke, machined a top piece and ensured the geometry was spot on!

With some more clever work, Stefan had the standard front wheel and braking package adapted and it was time to switch his attention to the bike’s looks. Knowing what was to come, the subframe was cut off with the grinder and an all-new rear was fabricated from individual pieces shaped on a tube bender. “Before making an aluminium body, I always start by making a wireframe to check the desired shape/design and also do this to see the clearance I have at the front fork, clip-ons and other parts. The wireframe also acts as a template to make cardboard sheet moulds for cutting the aluminium plates to the desired shape.”

Then Stefan begins to manipulate each piece with some good old fashion elbow grease that involves pounding the aluminium over a hollow tree stump, before beating it with a hammer on a leather sandbag to get the shape and rolling the dents out on his huge English wheel. This is done over and over again until the metal stretches and moves to form a perfect match for the wireframe that is still attached to the motorcycle. With each part done the TIG welder is fired into life and all of the pieces to the puzzle come together one by one.

Here you see the advantage of using a modern EFI motorcycle, with the stock fuel cell kept and the gorgeous new bodywork acting as a cover. The tail section is simply stunning too and a custom machined light housing is welded into a slot to create a seamless transition from aluminium to the light lens. The front fender too just further shows off Stefan’s skills, with the mounts for the new forks machined, he then hand-shaped the fender itself from a single piece, with the tabs all part of the same sheet of alloy. It all then goes onto the bench for hours of fine finishing and sanding and with this underway, Marcel Miller from Miller Kustom Upholstery made a stunning black vinyl seat.

To give the engine area some of its own handmade looks, a custom exhaust was part of the puzzle and this area of fabrication forms a large part of RWR’s work.“For this exhaust, we’ve done a collaboration with BOS Exhaust, where we’ve put together a muffler to our specifications. The cone-shaped end of the exhaust represents the converging exhaust of the F-16.” Adding a touch of modern tech, the DNA pod filter is attached to the engine with a 3D-printed air intake, adding a nice induction roar.

The finished product is both a stunning tribute to the F-16 and a brilliant example of what a master craftsman the young mechanic truly is. It’s well worth heading over to his social media to follow each build coming to life and who knows, maybe an aluminium Apache inspired custom could be next.