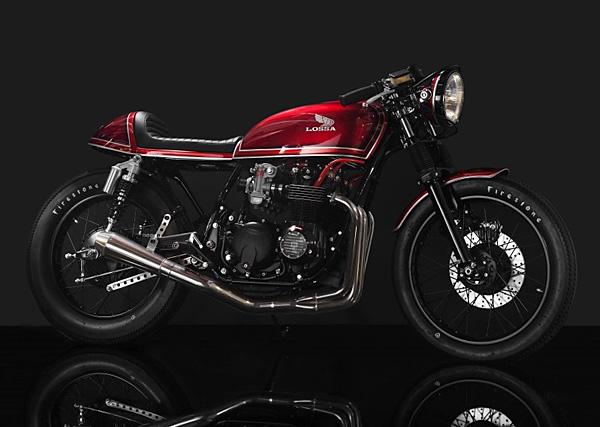 When it comes to Honda CB café racers there’s not a lot of people that have built as many as Jay Lossa and his team at Lossa Engineering in Long Beach California. Jay has lost count of the number of CB’s he has brought back to life since starting his shop back in 2007. He usually starts his builds with “rusty hunks of junk” that cost no more than $500. It doesn’t usually matter what condition they are in because he replaces every nut and bolt anyway. This time around he started with a decent donor CB550 that he picked up for $1300 – which makes it the most expensive donor he has ever bought. When you own a motorbike shop you tend to have a lot of spare parts lying around the garage, so Jay decided to build a bike with some of these spares. The Firestones were a cancelled order from a customer who changed his mind, so Jay incorporated them into the project. “I built this as an old school looking show bike, not a cornering carving machine” he jokes. “So I feel the tires are ok for that job”. The CB550 frame, wheel’s and all the parts were already powder coated black and the motor was rebuilt and blacked out. All the tabs were removed, frame hooped, battery relocated under the cowl, bike has been wired with a modern regulator/rectifier, dry cell battery, electronic ignition, Dyna mini coils and NGK wires. Jay also added an Acewell digital gauge and a Lossa mini key set up and starter button.  It also has a H4 headlight and a Lossa LED tail light. Tom McWeeney from Kustoms Inc had been wanting to paint one of Lossa’s bikes for a while, so Jay thought he would be perfect for this 70’s styled show bike. Tom did all the paintwork with House of Kolor paint. He started with a Orion Silver base and then did a candy apple red over with lines graphics and lace work. He finished it off with some silver leafing and hand pinstriping.  Tom even striped the part under the seat where the upholstery would have covered it up. “So not wanting to hide any of his artwork, I decided to expose the center of the seat,” said Jay. “I did all the bodywork myself and decided not to do knee dents and keep the tank straight and smooth as glass to show off all the artwork.” The motor received a big bore kit and is now a 608cc, cases were split, all new gaskets, seals, Barnett clutch and a valve job with all new valves were used. “The bike also has a Mega-cycle cam and huge Keihin CR racing carburetors so we can burn off those Firestone tire’s I love so much!” he says.  One of Lossa Engineering’s Yoshi style replica 4 into 1 exhausts were used with one of their reverse cone mufflers and the whole set up was ceramic coated. A chrome set of Lossa clubman styled bars were used to give it that classic café look, along with Biltwell grips, Tarrozzi fork brace and rearsets. Joker tappet cover, stem nut, axle adjusters and brake stay were used to dress up the standard stock pieces.  The brake caliper has been “polished to perfection” and the stock rotor CNC drilled. Every nut and bolt on the CB has been re-plated with chrome or zinc plating.  Jay finished off the build with some reservoir shocks, gold o-ring chain and Magura master cylinder. This 1977 CB550 has been given the name ‘Aldo’ and has been completely rebuilt and is now better than new. Jay has fallen in love with this bike but knows he needs to let it go and move on to the next project. “I have too much stuff and can’t possibly ride all of my bikes, so if someone wants to arm wrestle me into selling this bike to them, I will” he says. So if you want a CB550 café racer in show bike condition, contact Jay for that arm wrestle – you’ll win because he does have nerve damage in his arms.