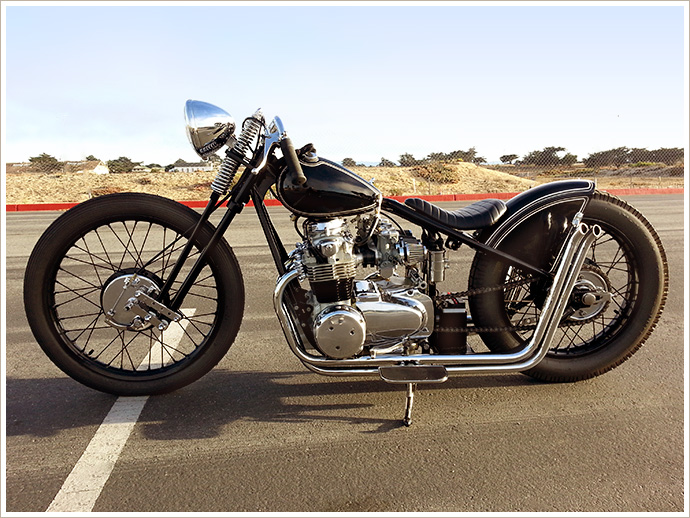 It’s always been understood that military service steels the mind. The travel. The rigor. The honour of serving one’s country. Give them boys and they’ll give you back men. Of course, this can take years to achieve – often longer. But what happens when you find yourself back home after an extended sea-borne hiatus and realise that while you’ve matured as a person, your garage is still stuck in a very green, very crotch-rockety 2008? Why you upgrade, of course. And not to just any bike. Meet Moh and his very ship-shape CB 550 bobber. “I’m a Navy guy who spent a long time missing his three bikes in the garage back home,” say Moh. “So when I came back from overseas service last December, I thought to myself, ‘it’s time to get rid of the ‘08 ZX6R in my garage and get something different’. To be honest, I already had a show bike in there that’s won 3 trophies and a bobbed-out Sportster, but I was really looking for something unique and different but also a bike that had a little bit of café in it too.” “Next thing I knew, I had sold the ZX6R and was ready. By accident I found a man named Louis Soto out of Riverside, California who builds garage chops as a hobby and was working on a CB550. I immediately fell in love with it and made the purchase.” “95% of the bike is hand-fabricated; the neck of the frame and engine are the only things off a stock CB550. There’s a custom fabricated frame, custom fabricated forks – the list goes on and on. The tank is off an old Sportster Mustang and it’s been cut in half and then reconnected through a hose at the bottom. The pipes took the longest to make and are a thing of beauty; an amazing job indeed.” “Louis didn’t want to go crazy with the paint job as it would have taken away from all the hard work and fabrication which he wanted as the first thing people noticed, so we chose a more vintage look instead of something too glam. As a finishing touch, parts of the engine and bike where taken for metal polishing and chroming. All up, it took about 4 months from start to finish.” “I love riding this bike around town. It gets tons of attention, mostly because people have no idea what the hell it is. I’d love to have it at the Quail Motorcycle Gathering next year, since I’ll still be stationed out in Monterey at the time. Riding with no instruments is hard at times – especially when I hit the freeways, so I just try to keep up with the other cars because I have no idea what speed I’m doing. That said, I don’t spend too long on the freeways; this is a pure toy and intended for around town fun and short rides here and there – for my own pleasure.”