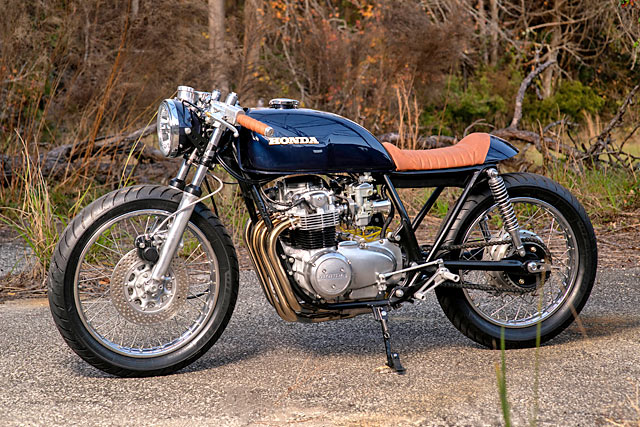 The parallels between riding a motorcycle and riding a horse are obvious. I’d argue that in a lot of ways, motorcycles are just the industrial revolution version of the good old Equus Caballus. In the 1850s, a horse would provide personal transport, you could use them at work, police would ride them as would soldiers, and they were a hell of a lot of fun on the weekends, too. Channelling this thought, Georgia’s David Meyers has created a happy medium of the two. No, it’s not some half moto, half horse cyborg. It’s actually an immaculate Honda CB550 cafe named after Achilles’ immortal war-horse, ‘Balios’. 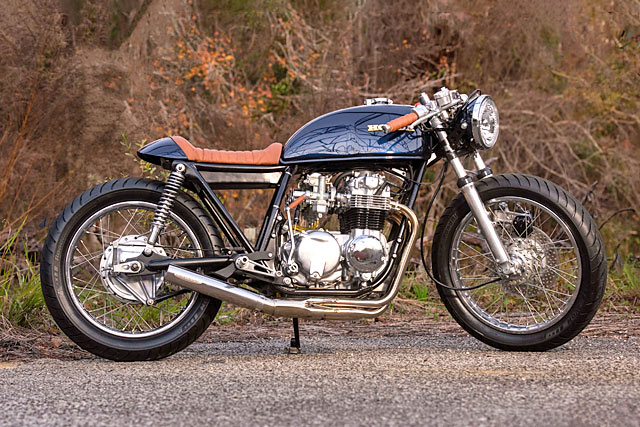 David starts the briefing with some Ancient Greek lessons. “Balios was an immortal horse,” he tells us. “One of two which pulled the chariot of Achilles during the Trojan Wars.” And no, it wasn’t that giant wooden one that was full of soldiers. “It’s a fitting name for a bike that even after 40 years is more capable and beautiful than when it was first born.” As a jet aircraft engineer by day, David likes to let off steam after hours by working with some less high-tech hardware. “I love the wow factor of a functional machine that is also visually appealing. Just look at the underside of the wing of any of our Gulfstream jets. It’s beautifully smooth with no protrusions or bumps.” 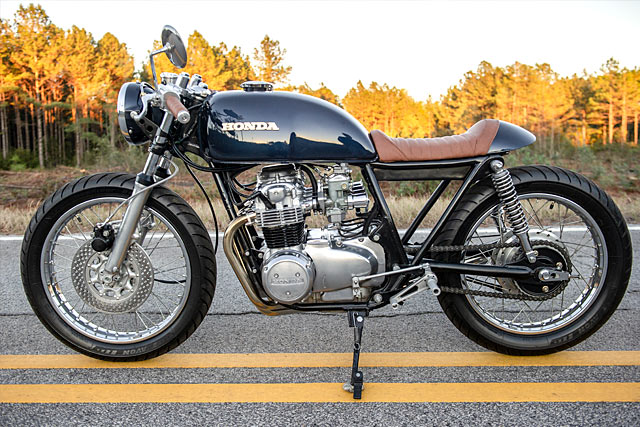 “Bike building is somewhat of a return trip for me. Like many of us, I rode dirt bikes as a kid with my Dad. I had a well-used Honda SL70. I stripped off the lights, added number plates and put on big knobby tires. Dad caught me jumping dirt piles in the field nearby and took it off me before I broke the bike – or my neck.”

Fast forward in time, and Dave tells us he bought the ’77 CB550K donor bike from a friend who’d owned it for many years. “It was in excellent condition with very low miles. I was torn about modifying it as it was so nice.” Dave passed on the significant original parts such as the 4×4 exhaust, fuel tank and seat to others who were restoring survivor bikes, so his ‘keep-it-stock’ guilt subsided and the fun really began.

Not starting with a basket case also made the process much more enjoyable. “My favorite part of a vintage car or motorcycle is the emphasis on the power plant,” notes David.  As such, my design theme for this bike was to focus the visual center-of-balance and details around the engine. The stock tank did not meet my requirements, so I sourced a CB500T unit which is taller and narrower in the rear thanks to the knee recesses. I relocated the tank attachments to raise and move it forward. This, combined with opening the frame triangle, better exposed the engine and velocity stacks.” 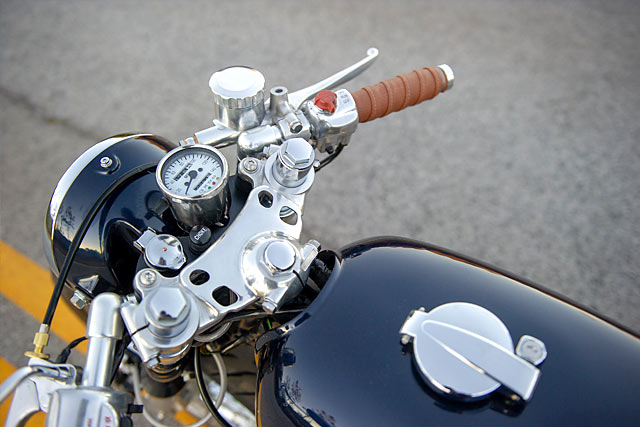 “I wanted the tank and cowl to seem like they were forged from the same billet with the seat section milled out for the rider. Even in the plan view, I put much effort into creating an hourglass shape with the tank, seat and cowl. This exposes the head and carbs from above and makes the engine seem much larger than it is. Once I had the metal work of the cowl and seat structure complete, I worked with my local upholsterer to tie both the ends together. As the design dictated a small seat cowl without a hoop, the electronics packaging became more difficult.”

[superquote]“I wanted the tank and cowl to seem like they were forged from the same billet with the seat section milled out for the rider.”[/superquote] 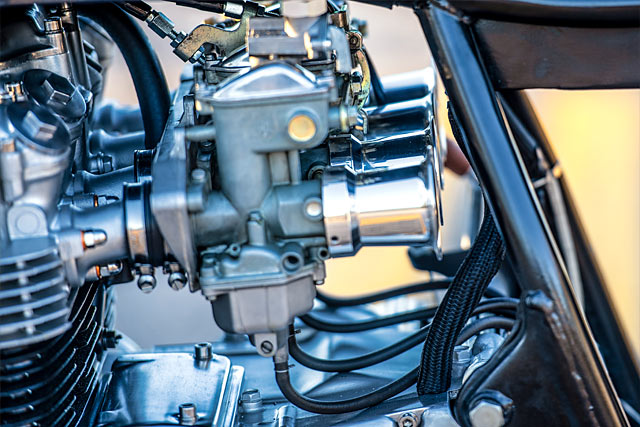 “I built the electronics enclosure to house the compact battery and other components. This gave me freedom to integrate the seat attachment with the license plate thumb screws so no tools were required to access the electronics. It also hides the tail light and license plate, but it is fully street legal.” The headlight and tail light also incorporate some turn indicators and license plate illumination. Up top, Dave built a shock-isolated gauge plate. This cleaned up the control area allowing for a small speedometer, factory choke knob and an easily accessible ignition. 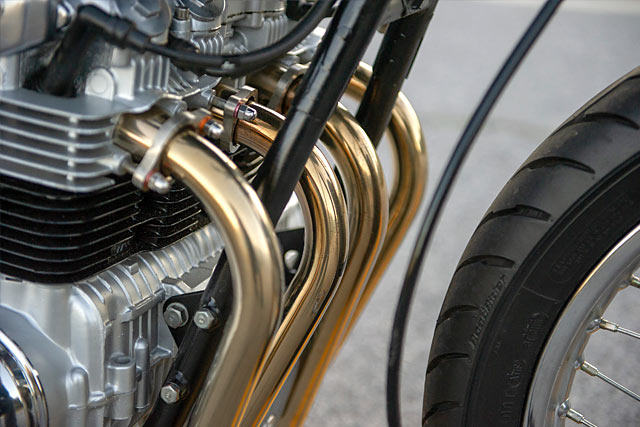 Dave wanted to reuse many of the Honda components, including the brakes, suspension and controls. The result is a look that seems very integrated and that wouldn’t have to try too hard to convince a moto layman that it was actually a factory job. The aluminum components – as well as many of the engine elements – were stripped, vapor honed, polished and then coated. “When I could not build a custom part, I procured the highest quality aftermarket components, such as Tommaselli and Tarozzi.” 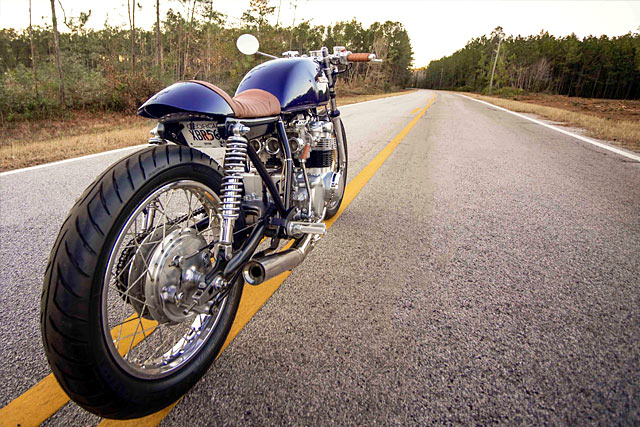 “I built this bike to be ridden often, so I maintained the stock shocks to compensate for the firmer seat padding. I also kept the electric starter. Finishing up, I painted it in a BMW dark metallic that appears black except in bright sunlight. I also wrapped the grips with the same materials as the seat to provide a clean, integrated look.“ Note to self: check the Gulfstream website to see if they are currently selling a cafe racer-styled G5.

While not War and Peace, Dave’s extra parts receipts do make for impressive reading. There’s the Tommaselli clip-ons, Tarozzi rear sets, Apex brake lines and a Delkevic stainless steel exhaust. The battery is a Shorai Li-Ion item and it sends its juice to both HID and LED lights. Upholstery is from Coastal Empire Moto and the whole freaking party is running on the very cafe-friendly Avon Roadriders. “This build has been very enjoyable,”

Dave says in closing. “I am already planning my next one as I love the creative stress of blending vintage and modern elements into a functional machine that even non-riders find appealing.” And no prizes for guessing the next bike’s name; our money’s on ‘Xanthus’. 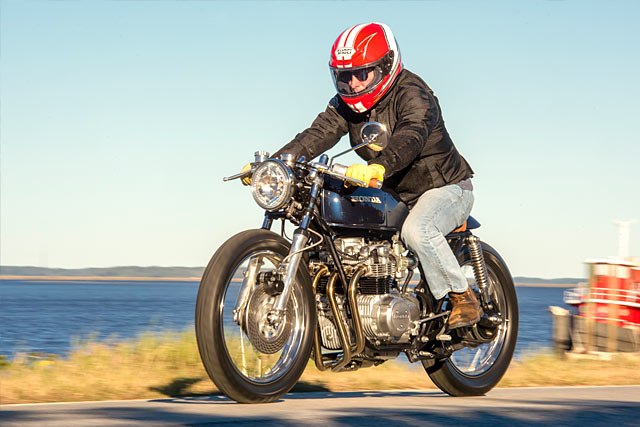