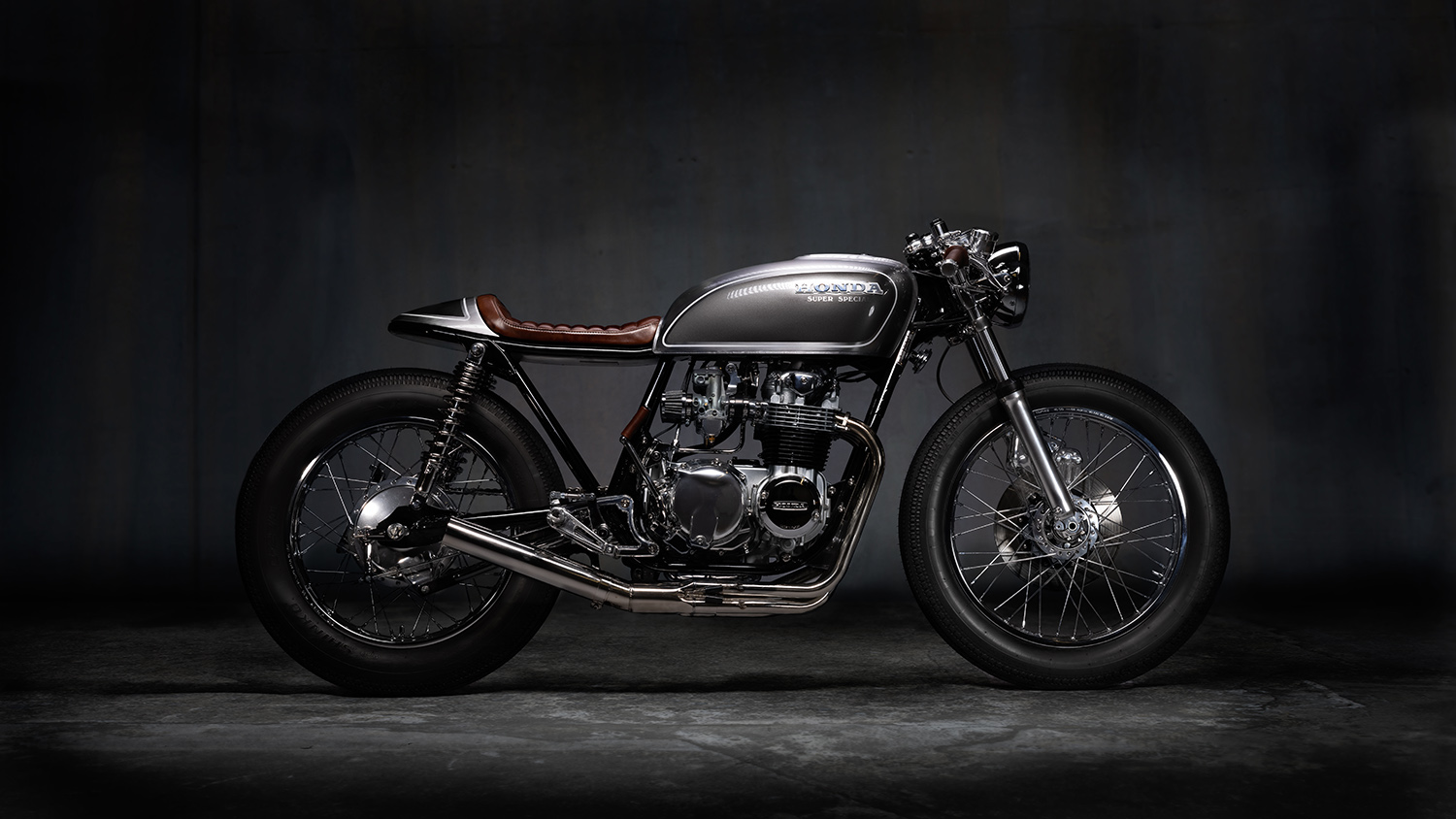 The original Honda CB750 sportsbike might have been the Japanese motorcycle that made the world sit up and take notice, but it was the CB550F that was turning many paying customers towards the land of the rising sun. Bike Magazine labelled the Honda the pick of the crop among all bikes under a litre in 1975 and decades on the middleweight all-rounder still has plenty of fans. One of them is Basti Happ of Munich, Germany, who under the banner of 089moto is taking a midlife detour and producing classic customs like this clean as can be 1976 Honda CB550F cafe racer.

Always with an interest in design and engineering, it was when meeting his motorcycle riding friends in the city that Basti first considered that maybe two-wheels was for him. They could park anywhere, while he had to do laps of the block no matter how nice his car was before he could find a space. “Then when I decided to do advanced training to become a master craftsman for body and vehicle construction in evening and weekend school in addition to my job, I came up with the idea of converting an old motorcycle into a cafe racer during my 1.5-year study period in order to distract from work and learning,” he explains.

On the hunt for a Honda CB, he knew this CB550F had to be his when he found it with just 7000km on the odometer and from his year of birth, 1976. Sure the engine was stuffed, the chrome was gone and nothing worked, but it was rust free and that would provide him with a solid foundation. With no workshop, no bike license and only a handful of tools, he and some friends carried the Honda into the basement of his house; here it would live until it was finally born again! “I tried to take something old and give it an enormous amount of respect and love.”

With the bike underground and Basti having just his meagre amount of spare time to work on it, the Honda was disassembled into its 100s of individual pieces. Grinder spinning and the back of the subframe was lopped off and in goes a hooped and shortened replacement piece of round bar. With the full frame given a new coat of black paint, a polished metal box was fabricated to sit between the seat rails and hold some of the electrics, with the rest hidden in the tail and as much of the wiring as possible running through the frame.

Over the top of the box, that seals the underside of the seat, a base needed to be made and Basti had a clever solution. Using carbon-fibre results in the ultimate in strength and light weight for a part that is purely functional. Over the top of the padding is beautifully hand-stitched vintage leather and 550 Four embroidery – this first time builder is a natural. He then crafted the minimalist rear hump from 1mm sheet steel to match the lines of the rear of the tank, before wielding the paint gun to deliver a stunning finish over the brushed metal.

A seized old engine provides for the perfect learning tool and Basti sunk his teeth into rebuilding it back to the silky smooth 50hp donk in factory fresh condition. The carburettors came in for the same treatment, before being jetted for the mods to come. Then with a little paint and a hell of a lot of elbow grease he had the whole thing shinning as if it was being prepared for a museum. But wanting to ride it with the full aural experience, he fitted up a set of pod filters on the intake and a full 4 into 1 exhaust for a beautiful sound.

With the bike having been found with destroyed chrome work, the hubs and wheels were no exception. So it was back to repairing and polishing before he had a set, front and rear, that were better than new and wrapped them up in vintage Shinko rubber to suit the theme. The front forks are lowered internally and through the trees, while new rear shocks replace the worn-out original items. To add his own personal touch, Basti ground down and smoothed out the top triple clamp and then laid down a laser cut 550 Four badge.

To match the riding position provided by the new clip-on bars, a stunning set of rearsets was fabricated to match. Then Basti took an incredible amount of time to hide items like the brake switch, side-stand switch and the speed sensor for the vintage style Motogadget speedo. A set of seat matching grips go on the bars, a leather wrapped kickstart from the seat’s hide and he even went so far as to etch the buttons on the Motogadget switchgear for an outstanding result. It’s fair to say that Mr Happ is a natural and has hit the ground running with this brilliantly built Honda, he’s nearly finished another and the future shines bright like chrome for Munich’s 089moto.