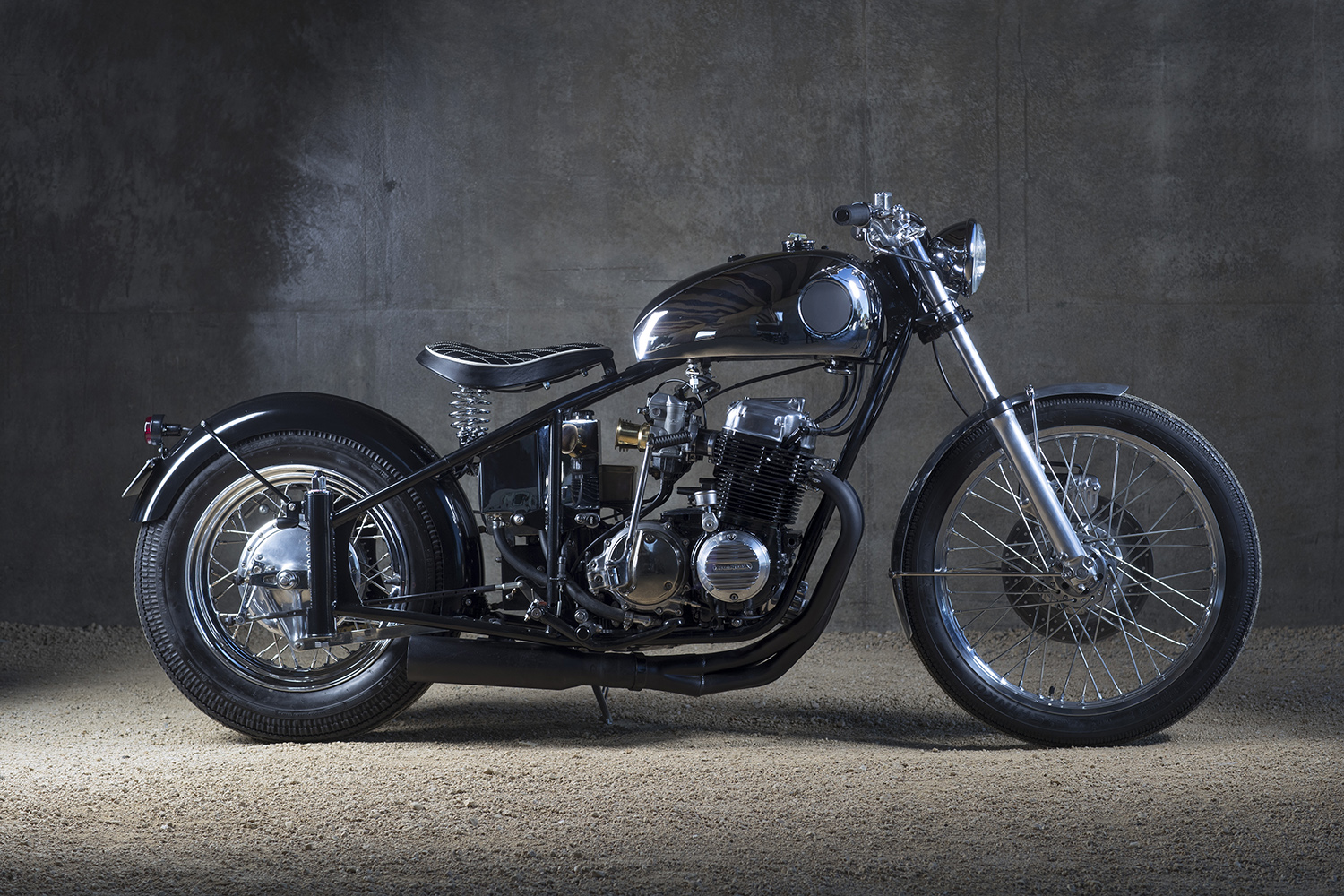 As the old saying goes, there is more than one way to skin a cat and never is that more true than in the custom bike world. Every builder not only has their own way of doing things, but even when presented with the exact same model of motorcycle, can come at it in a million and one ways. The last time we spoke to Sydney’s Sabotage Motorcycles they showed off their Honda CB750 that was very much a classic build in the cafe racer tradition. Once again Andy and Giles return with the famous Honda four, but the result couldn’t be more different with this 1977 CB750 having now been transformed into the most beautiful Bobber with a unique plunger frame.

The CB750 has a storied history in the custom world, lending themselves to everything from highly successful race bikes, trackers and scramblers, a staple of the cafe racer scene and for a long period provided the power plants for a host of custom choppers on both sides of the Atlantic. It might have been the first universal inline-four-cylinder sportbike, but it also happens to be bloody versatile too, with incredible longevity and that’s a huge tip of the cap to the designers and engineers who created this wonderful machine at Honda HQ.

It seems this particular ’77 model has lived quite the life too, as Giles explains, “A UK born motorcycle were somewhere in its twenties was pulled out of its Japanese frame and planted into a Santee plunger hardtail frame. Very much in chopper mode; long rake and painted ultramarine blue. Our client had it shipped over from the UK about 20 years ago. His plan was to keep the frame but somewhat sanitise the look by turning it into a traditional bobber. Years ago he found someone to adjust the rake and re-weld the neck so that the original Honda forks could be re-used with the frame.”

There the bike sat, the frame had been prematurely powder-coated, a host of various parts collected for the build, but no shop in Sydney wanted any piece of it. That was until the owner discovered the talents of Giles and Andy and things could finally get back on track. Doing an assessment of what was before them, the boys could see that there wasn’t a lot of cohesion between the bike as it was and the various parts that had been purchased to be added. But mindful of the budget, they set about piecing things together. “Once the bike was on the bench we identified some fundamental issues with the overall design and proportions of the bike.”

The first of those issues was the 18-inch rim at the front, this was swapped out for a much more impressive 21-inch rim that’s been laced to the hub with stainless spokes. With both ends then wrapped up in vintage Shinko rubber, the stance was now truly befitting that of a bobber. Over the front tyre goes the hand-made full length guard that is mounted on a custom set of struts and hugs the rubber hard. Unfortunately the same couldn’t be said for the rear, with the guard that was on the bike sitting up in the sky above the tyre.

“The rear guard had new mounts fabricated so it sat snug on the back wheel and we welded in a channel for the wires while we were at it.” The full length guards at both ends help to give the CB a true vintage aesthetic, as opposed to many modern day built bobbers where the fenders are cut back to the point of being useless. The next issue to rectify was the tank, it had rolled into the shop on the backbone and the metalwork itself looks a million dollars. But it was mounted too far back and at a funny angle, so it was back to work to have it sitting just right.

“The cockpit also had a redesign from the client’s vision in that we ditched the large and cumbersome gauges and switches for much neater units, including Motogadget speedo and Posh switches, to give a really clean and simple look upfront.” These are all mounted to the flat bars that like the risers both have a level of pullback, giving the Honda similar lines to the glorious AJS and Matchless machines of old. The rider sits on a twin coil-sprung bobber seat, beautifully stitched and piped, with vintage lighting completing the look.

Finally that CB750 engine with a passport full of stamps could go back in the freshly powder coated frame and it’s a sight to see. Finished out perfectly with just the right mix of polished metal over the black paint and a set of brass velocity stakes for some old school charm. A four into one set of pipes means you’ll hear her coming and the whole bike has been given a re-wire from scratch, with the start controls brilliantly hidden in another vintage piece. Once again the famous Honda shows its ability to be morphed into any form, but even with all the parts and that stunning Santee frame; you still need a talented team like the boys at Sabotage Motorcycles to turn a random bunch of bits into a beautiful old school bobber.