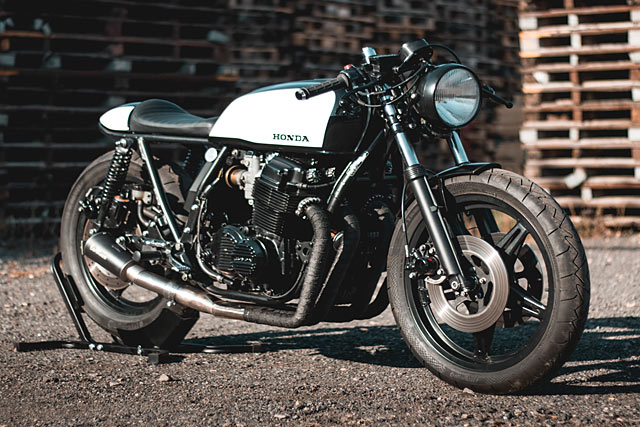 Make no mistake. When you look back at the ‘cafe racer boom’ of the last ten years from the comfort of your anti-grav recliner chair circa 2048, this will be the bike that you will see. Because all of our fiddly little brat, scrambler and tracker nuances will be lost in time like a replicant’s tears in rain. History isn’t one for subtlety. This will be the bike in the holographic database. This will be the archetype we will all remember. And this is the latest build from Germany’s Kaspeed; a classic Honda CB750 cafe racer that’s really going to stand the test of time. 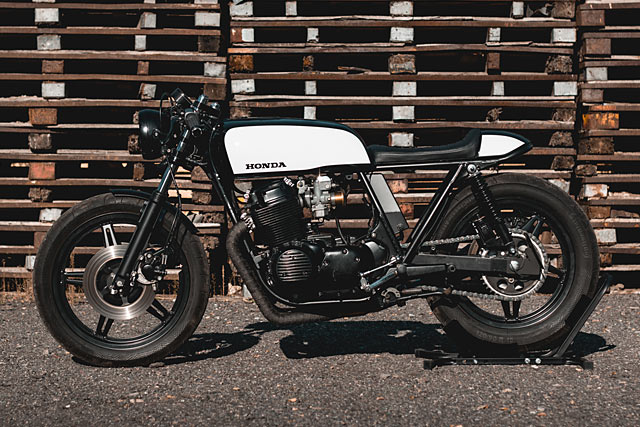 “We were pretty busy over the summer with our Honda CB SevenFifty limited series,” says Kaspeed’s Jimmy Dressel from their Saxony headquarters. “Mainly, we’ve been we showing the prototype of the bike at various moto events. Also there was the preparation for stuff like the Glemseck 1/8 mile sprint and Intermot in Cologne. Naturally, these are very time-consuming as well, so planning is key. But we also had two individual projects, one of which is this Honda CB750 from 1976.” 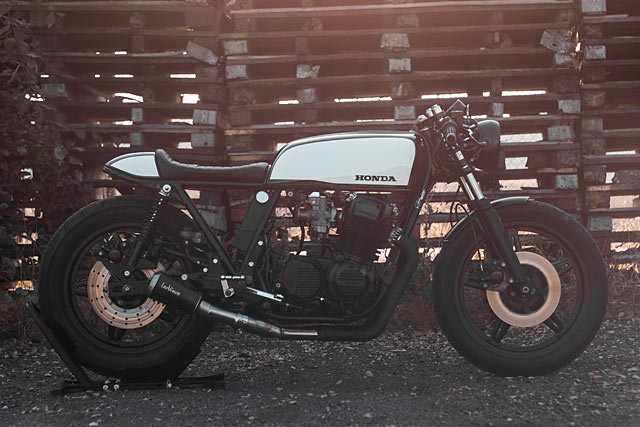 Unabashedly calling the bike “an old school cafe racer,” they’ve targeted a combination of retro vibes and a few modern touches – like some industrial, blacked-out styling – keep things interesting. The donor bike was a ‘76 CB750F SuperSport and the end result delivers a rear wheel 67 horses, all wrapped up in a fully road legal package replete with Swiss MFK. “The bike is for the same Swiss client as the CB500 we did last year. But with the CB750, he was aiming to have a bit more power available and also a more comfortable seating position for his height. The previous owner had done some amateur changes to the bike’s seat and paint, but otherwise it was stock.” 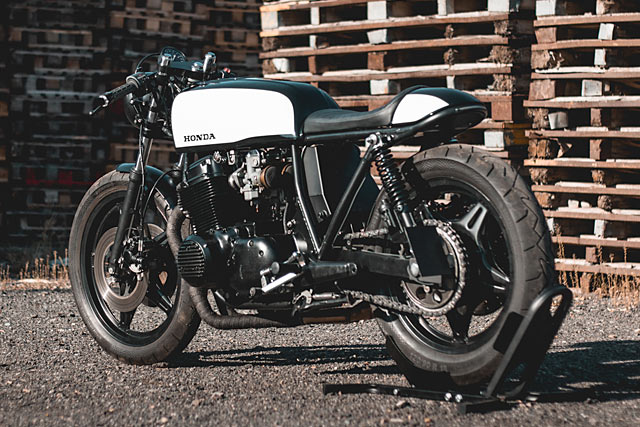 And with that added power comes an appropriate increase in attitude, too. While the lines are still very clean, its fine gold detailed finish, more aggressive livery and wilder exhaust speak volumes as to its intent. “The blacked out frame and motor also help to create a bold look,” notes Jimmy. “Our client had some parts in mind which he asked us to use, such as a LED-stripe tail light and some Motogadget electronics. He also had some styling clues which he showed us; we took them and converted it all into a finished, rideable reality.” 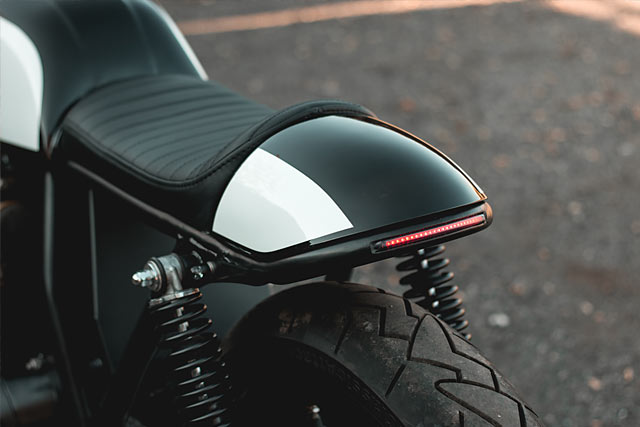 So what was challenge nummer eins? “Before anything else, we needed to shorten the rear frame while complying with the strict rules in Switzerland. This way we could create a tidy, very small cowl out of fiberglass and finish it with a classic loop and integrated tail light. The tail light sits in a sheet metal construction which is welded into the loop.” The Li-ion battery and all the electronics were then hidden under the seat and cowl. Before disassembly, they cleaned out the frame triangle, de-tabbed the skeleton and did a full pre-assembly. “The frame, rims and engine, as well as some other parts, were powder coated in a matte black. We did the black and white paint job on the fuel tank and seat cowl in-house, as I have a professional painting background,” notes Jim. 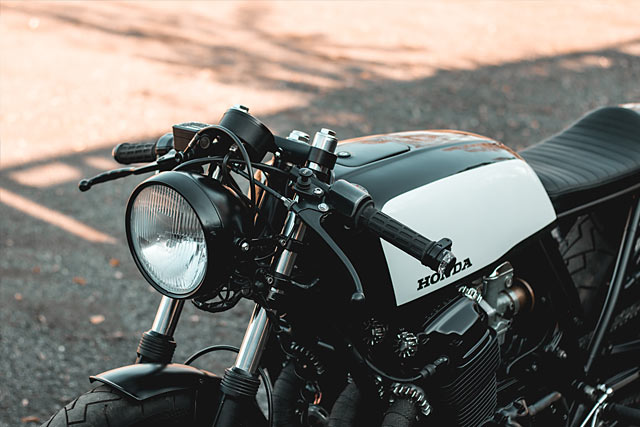 Next came the final assembly, when the bike’s classic new looks really started to come together. “We fitted a new oil tank from Cognito Moto and also used their beautiful top triple clamp that’s been CNC machined from black anodized billet aluminum. Then we added some Fehling clip-ons and the Motogadget Chronoclassic tachometer in the cockpit.” RFID ignition and some m.blaze indicators finish the Motogadget clean sweep of the CB750’s electrics. “For sound and performance we fitted the great-looking, great sounding Leo Vince LV-10 Black Edition stainless steel muffler and tuned the carbs to match the pod filters. The 4-into-1 manifold was wrapped in anthracite heat tape for a bolder look.” 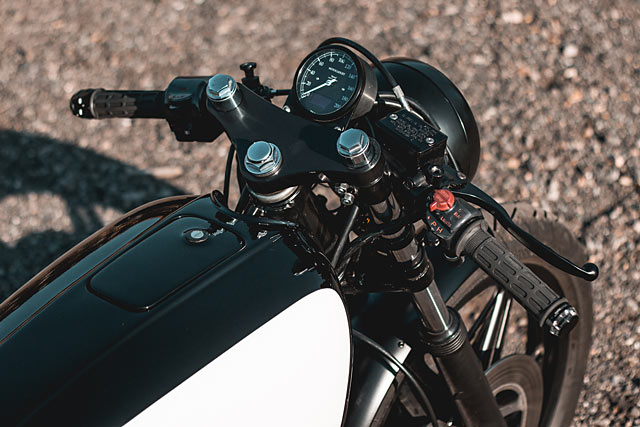 As with all older bikes, the Kaspeed team noticed a few discrepancies that really made them scratch their heads in wonder. “First we noticed that all the cables for the indicators were missing, so we had to rewire these. Next we discovered that the gear shift spindle arm was not hooked into the shift drum, so the bike could not be put in gear.” Behold the miracle of amature mechanics!  “We don’t know if this happened by chance or if the previous owner made a mistake while assembling. Either way it’s always tedious stuff to solve random things like this.” 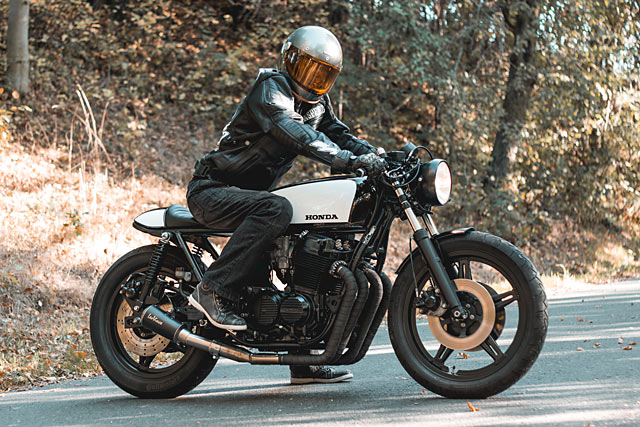 “The part we like best about the bike is the minimalist tail which in my opinion looks quite modern with the LED tail light and the clean finish. We also love the bold overall appearance with the black engine, frame and rims. The muffler helps there, too. Black and white are always a classic combination which is never out of date, especially because the monochrome industrial vibe is so popular today.” We’re pretty sure it’ll still look good in 2048, too. 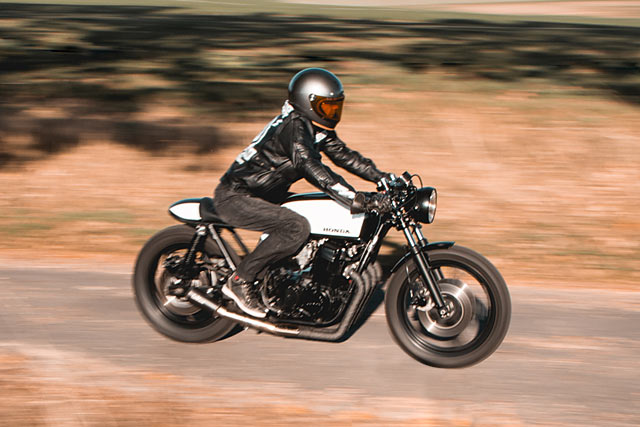