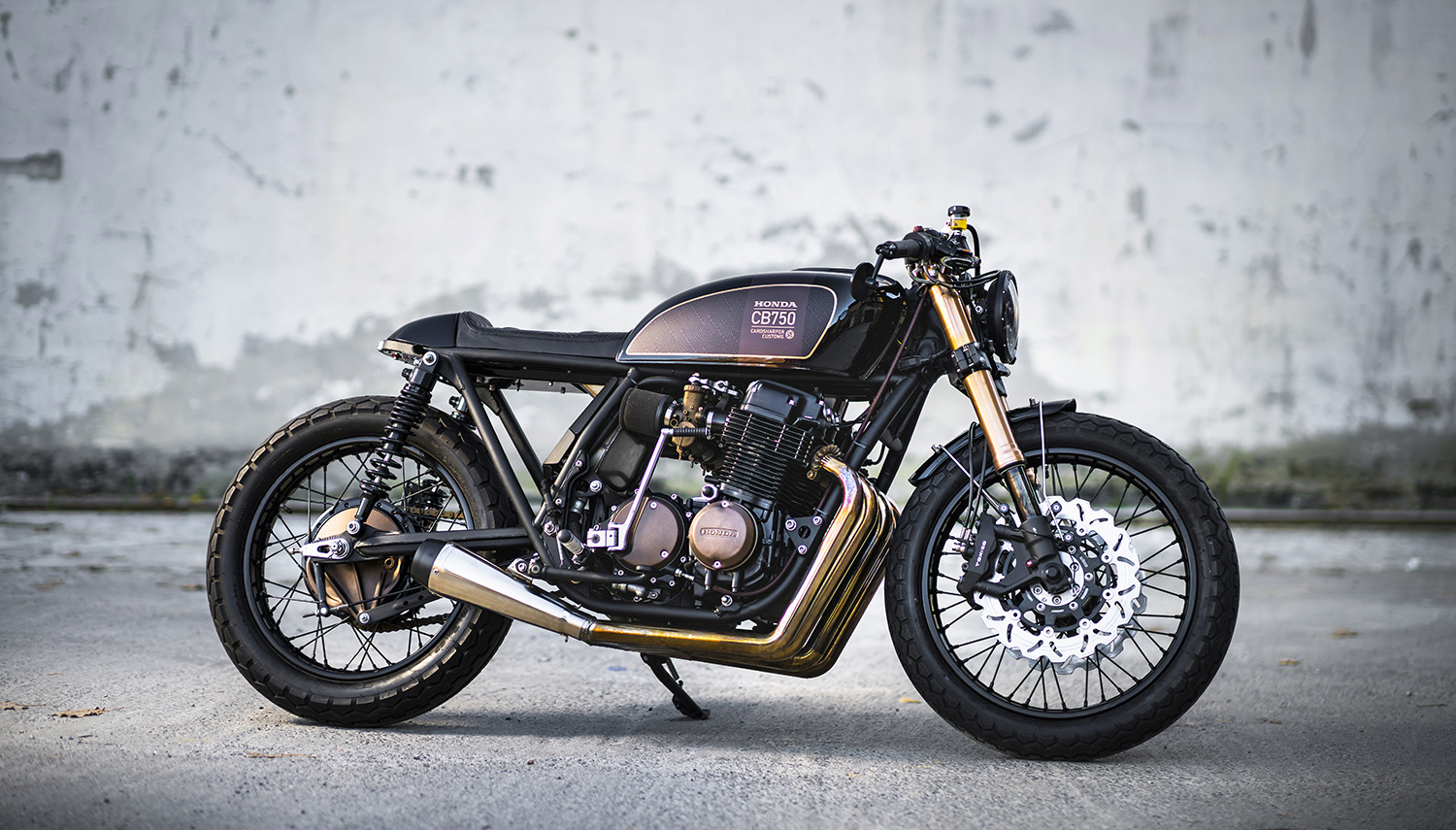 Buying a new car or motorcycle is a pretty easy thing these days, and there is no shortage of expert reviews to steer you away from the lemons. But that’s not so easy when it comes to selecting who is going to craft your custom bike, and you’re often relying on them to be a great fabricator, painter, mechanic, and designer all in one. Normally you’d want to meet the builder, pound the flesh, and check out their work in person, but Covid-19 has meant that’s not always possible. Never fear, however, as Jacek Mulak of Poland’s Cardsharper Customs had no intention of letting down his client and delivered this truly stunning Honda CB750, sight unseen.

We’ve followed Jacek’s work for years now and featured many of his builds, always of a high standard he’s simply honed his craft over these years to turn out one hit after another. “The base is a 1971 Honda CB750. A customer bought it from me, and it was already a slightly modified bratstyle. The engine was after all needing repairs, as for the rest, I changed everything during this rebuild!” The catch is, the client from Berlin had never seen the donor before he bought it and wouldn’t see the bike until it was delivered to him completely finish; now that’s faith.

To commence the build the bratted out bike was stripped down and the subframe dramatically shortened. To keep the rear as clean as possible, it was given a flattened hoop treatment and a taillight is embedded into a custom aluminium surround. The rest of the frame was smoothed out, the welds checked, and then it was off to powder coat for a hit of satin black. Many of the other components that don’t normally get a mention in a write-up were also treated to the hard-wearing coating; brake pedal, rear brake arm, support bar, and all the little pieces that too often are ignored.

For the fuel tank, the client was really keen on the look of the CB550 unit and that sent Jacek on a mission to find the right piece of metal for the task. With a suitable condition tank found, he spun up the grinder and cut out the bottom to create a recess that would allow room for the carbs on the taller 750cc engine to fit. The rear cowl was made by hand and is the perfectly sized and proportioned cafe racer hump. With the seat unit itself based on a pan that was built in-house and a wild custom stitch in black leather from Jacek’s favourite upholsterer.

It was time for paint and with the client on board, it was the painter who was the one who really had to have his arm twisted. “The whole bike was painted by my colleague Marcin, the painter, and he wanted to hurt me for the complicated pattern,” Jacek laughs. “Black on the tank and the backside is a smooth shine. Side panels are two shades of brown and a shade of gold additionally covered with matte lacquer.” The finished result is simply stunning and matched with the leather work makes for a stand-out piece. But this is a bike built to be ridden and that meant some more major changes.

The first of which was to ditch the entire stock front end and with the use of an All Balls bearing kit, a set of forks and triples from a Suzuki GSXR was swapped over. The beefy gold forks don’t just match the paintwork, they deliver a serious improvement in handling and the big Tokico brake package is very handy too. But wanting to keep the standard rims, Jacek had to machine a brand new axle and custom spacers to make it all fit. The rims are painted black and fitted with vintage-looking modern rubber, and a new set of rear shocks bolted on too.

Powering the party, the engine has been rebuilt and a truly stunning set of pipes crafted from stainless steel in-house. The carbs are jetted to suit and then fitted with pod filters, before being finished out in Cerakote. The same look is not only applied the engine’s side covers but also the back sprocket and the chain, no doubt a nightmare to do. With a separate oil tank, Jacek decided to fabricate a new one from scratch in stainless and then crafted a black coated cover, with neat red bolt washers to match the lower adjusters on the forks, magnificent.

All of the supporting components for the build are first-class too, an entirely new wiring loom was built from scratch and the stock switch blocks were completely refurbished. An m.unit runs the show and the battery is hidden under the seat, which removes with a single bolt to also allow refilling of the oil tank.

With the bike tested it was shipped off to Berlin, “Jens showed a lot of patience and showed great confidence in my ideas and skills, because he saw the first photos of the finished and washed motorcycle only after this photo session was taken. Apparently, the motorcycle made an even greater impression on him live.” And boy can we see why!