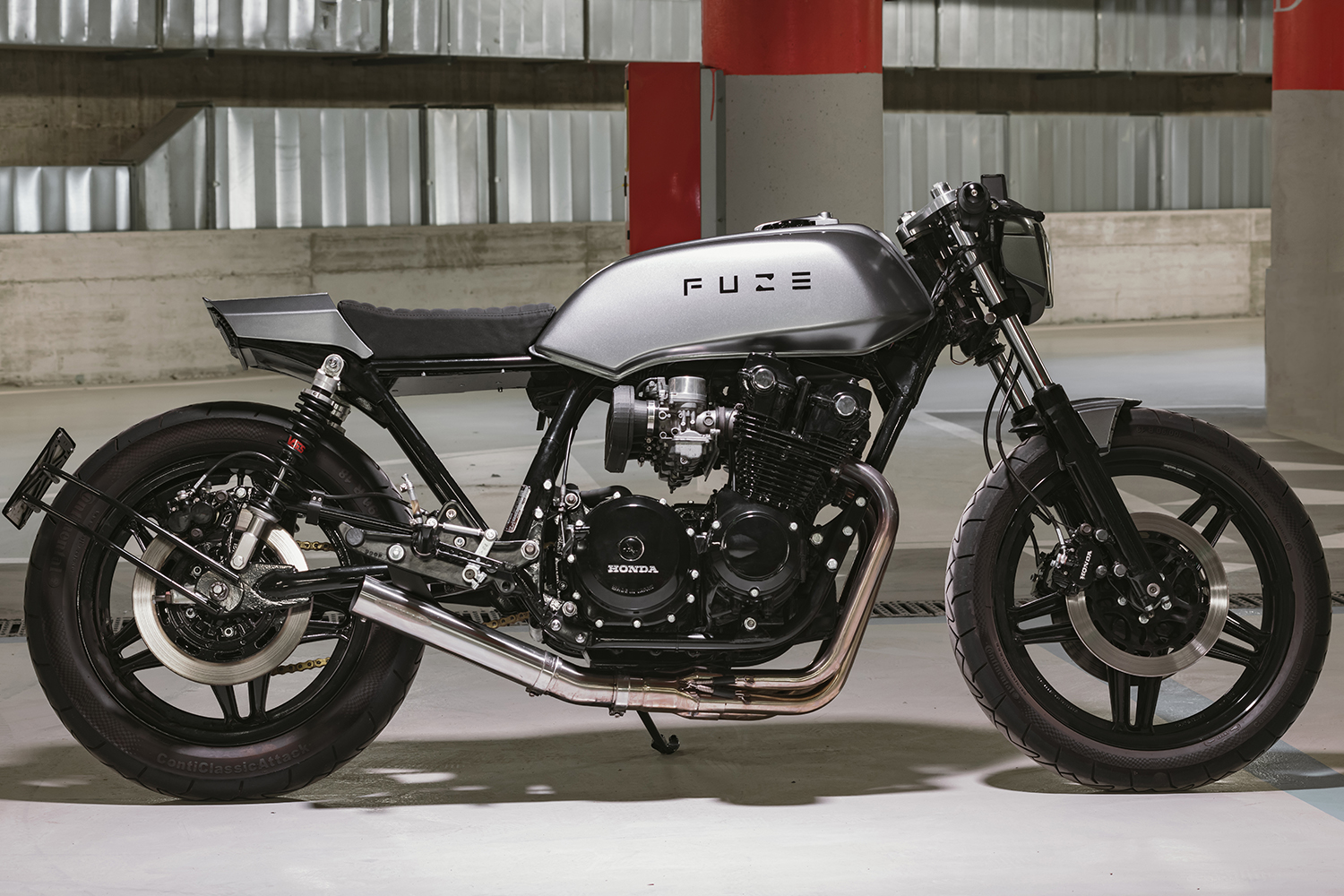 The real-life of a lawyer is not one often portrayed in the movies or on TV, the devil really is in the detail, whether hidden deep in the forensic evidence or tucked away in the fine print of a contract. So, it makes sense then that a lawyer who turns his attention to the world of custom bikes will reflect his craft in his creative endeavour. But that doesn’t mean the passion for the aesthetic is lost nor the thrill of the ride, especially when you’re a young Italian from the beautiful city of Salerno. Meet Amalfi Coast attorney Gerardo Di Maria, who has formed a new side business with his friends Raffaele and Maurizio which they’ve called Fuze, from which they mix technologies and techniques old and new to produce stunning customs like this Honda CB750.

“I have always been passionate about cafe racers and over the years I have made a few, as part of the “Motomato” project. I have always dedicated every free minute to my burning passion for special bikes, studying the precious details contained in the pages of your site since 2014,” Gerardo explains. A few BMW R100s and a pair of Kawasaki KZ Twins are in his past, but to commence his new enterprise, he sought to tackle an all-new steed. The CB750 has lost some of the cult following it once enjoyed, but when he saw this Bol d’Or edition for sale, he knew it was the perfect canvas on which to paint.

Inspired by monochrome imagery, particularly that of Nolan’s Batman, the bike was stripped down to a bare frame and the design process could begin. “After many freehand drawings, we started with CAD drawing and to create the first 3D printed tail. It was a success, we liked it immediately and we decided to refine the design.” Refine takes on a whole new meaning for the perfectionist lawyer, who printed no less than 30 more prototypes before he was totally satisfied. It was all done in the pursuit of achieving three core goals. The tail had to house a lithium battery, accept the indicators of modern Honda scooter and be easy to disassemble for easy access to the electrics.

To prove the long-term viability of the design, Gerardo also set himself another goal, the printed piece had to be able to withstand a static load of 100kg when bolted to the trimmed off subframe. With all of this achieved and the final product fitted up, it was time to move to the front end. The headlight is from the KTM catalogue and is mounted hard against the forks with a set of collars designed in-house, that are then sinter 3D printed (SLS) to continue the theme of hand-drawn parts being brought to life with the latest tech.

The surround for the headlight was next, again a 3D printed item, with small winglets included that are inspired by those from the latest CBR1000RR. “Finally, the mudguard made it difficult for us too, pushing us into dozens of prototypes, and the final result seems to be consistent with our idea: to keep the original tank, reinterpreting the few lines of which it is composed and transfusing them into something new, futuristic 80’s inspired.” It’s all finished off in a subtle BMW Frozen Gray, that was remixed five times to add some extra gloss over the naturally more matte finish. With the mechanical components finished in black, the monochrome dream had been achieved.

Shifting the focus to the functional aspects of the bike, a top triple clamp was designed that would look neat, add increased stiffness and also be capable of housing the speedo and warning lights, for an ultra-neat finish. CNC machined from billet aluminium, a pair of fork tops was also made that screw into the rebuilt and internally lowered units that get a top-up with Ohlins oil. To get the back end up to scratch a set of YSS adjustable shocks go in and the brakes come in for an overhaul too. Accossato braided lines with 3D printed collars and a new Brembo master cylinder, originally intended for a Ducati Monster.

Time for an engine overhaul and with the four-cylinder lump out of the chassis it could be thoroughly cleaned, given a mechanical spruce up and then finished in a glossy black. For a clean look and a rip-roaring sound, the proven 4-1 Devil full exhaust system goes on. And it was then over to sort out the CV carbs, stripped and cleaned they’ve first been fitted with a stage 3 Dynojet kit to flow the extra fuel for the exhaust. Then it was back to the design board to draw up an ultra-neat filter housing, that perfectly holds the foam in place and provides for another talking point.

“Then, we decided to redesign the electrical system of the motorcycle, starting from the Motogadget Mo.Unit blue, reorganizing everything with the help of super seal connectors of automotive derivation and designing it so that maintenance interventions were easy, simply by disconnecting the necessary wires.” A generously padded and beautifully upholstered seat goes on and then Raask footpegs in black for the rider’s gear engaging enjoyment.

Finally, to finish out the build, the monochrome coast carver needed quality rubber and the Continental ContiAttacks make for the perfect choice. Gerardo now has exactly what he was after and Fuze is ready for the future, shaping the way the Amalfi coast does motorcycles with old school passion and cutting-edge technology.