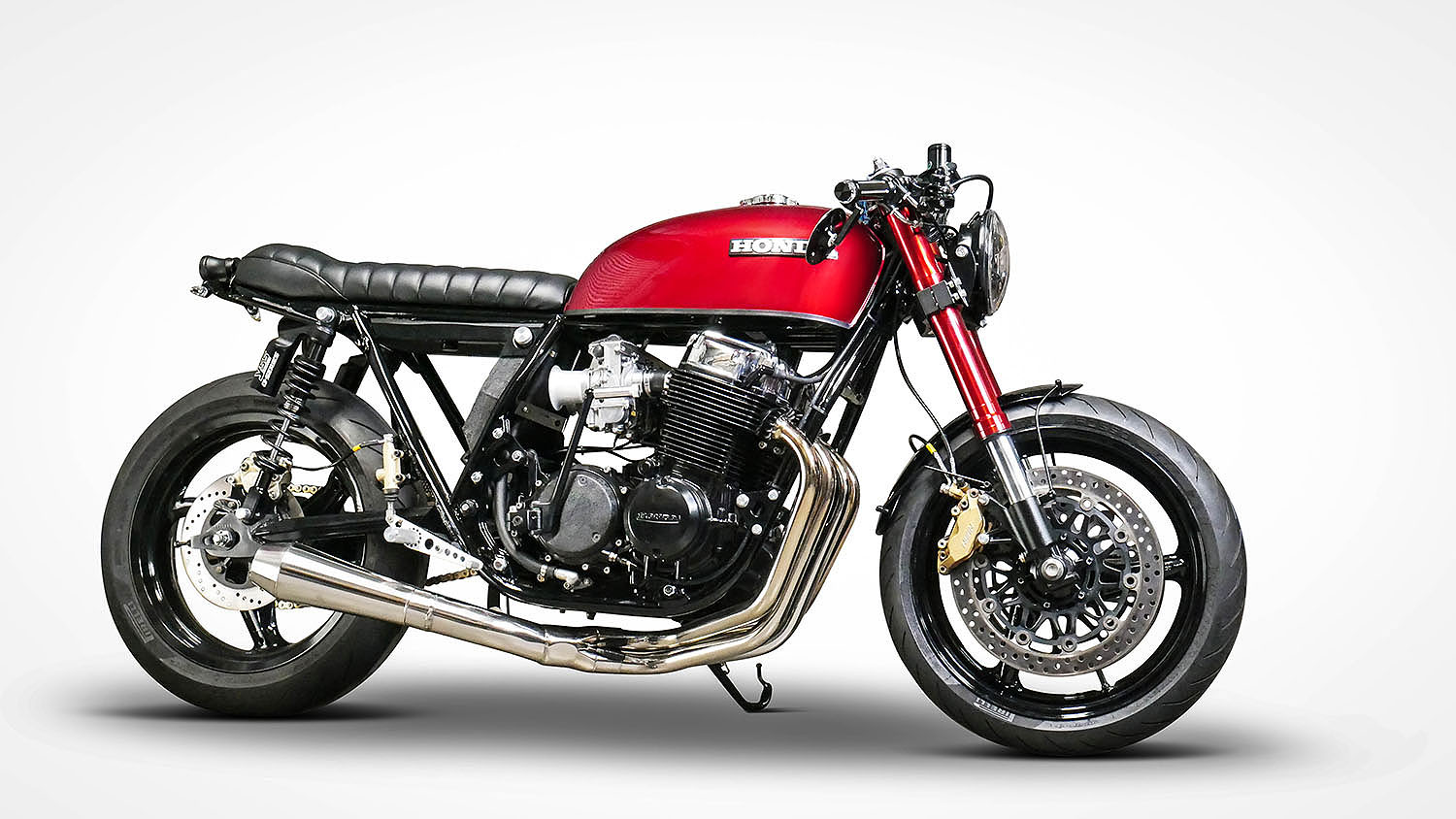 Fifty years is a long time in any industry, but in a highly technical game like the motorcycle business, it’s an eternity. And can you believe this bike that sits before you is exactly five decades-old this month, Honda could never have believed people would still be riding the K2. In fact, so unsure was the big H about the CBs success, that they limited their investment in the initial production run. But as good as the original superbike was, all these years later it needs to be brought into the 21st century. Enter Australia’s Jax Garage, a highly talented team who have all the bases covered and knew exactly how to re-engineer the machine that would become this stunning ruby red cafe racer.

We hadn’t heard from engineer and head honcho Jas Babalija for a few years, but it seems he’s been a very busy man. Supported by highly experienced mechanic Dom, and creative director Christina, they’ve not only been building bikes but developing an all-new product line. So, tasked with giving this 1972 Honda CB750 a complete make-over, it was the perfect chance for the Melbourne-based outfit to show off the incredible parts that they’ve been creating.

The first of which totally transforms the front end of the bike and is part of their catalogue of fork conversion kits. Available for popular Honda and BMW models, the kits allow you to take almost any of the best modern superbike forks and fit them up to your classic machine. But taking it a step further, you can also detail things like the specific offset you’d like, this isn’t just about slapping on some sexy legs, it’s about truly transforming the way your old bike performs.

The Honda receives the 7 series race-spec package, with the gorgeous black triple trees made from high quality 7075 T6 Aluminium, now gripping a pair of CBR929RR forks. Before they were bolted in, however, they were treated to a full internal rebuild and anodised red to match the paint with satin clear for protection. The Honda superbike also donated its calipers, discs, and lightweight alloy wheel. With custom Hel brake lines used to feed the system from the new master cylinder up on the bars.

“The rear end is a custom set-up that integrated a 2004 Ducati Monster rear wheel and upsized sprocket. The hardest bit about this build was sorting out all alignment and getting a custom offset front sprocket to suit the new rear wheel. Because the bike was 50 years old a special inner spline was needed, but fortunately, we found a local company that could replicate our 3D printed prototype,” Jas explains. Controlling it all is a spec’d set of YSS piggyback shocks, and it’s here you start to notice many of the custom touches.

Turned on the lathe or machined on the mill come a set of suspension bolt covers that add a unique touch of precision and class to the build. Replicated in a larger size is the filler cap to the custom oil tank that sits neatly below the seat. There is also an incredible 5 piece crankcase breather that you’ll only see if you poke your head under the tank, but quality parts serve a function first and foremost. There’s also a custom set of billet clip-ons that come from the Jax Garage online catalogue and rearsets to match.

Much of the bike’s look comes from the high-quality finish of these tiny details, but stand back and you simply can’t miss the gorgeous factory fuel tank. “The tank was painted a Candy Soul Red, and cut & polished a number of times to get a mirror finish in the clear coat. The tank, paired with the chrome replica cap and ’70s Honda badge gave it a real nostalgic feel.” Behind which sits a classically styled black leather seat, with a vintage taillight sitting on a neatly hooped out rear end.

To wake up the famous SOHC, 750cc, four-cylinder, the stock carbs have been ditched and in their place go the power producing Mikuni RS34’s and a set of 50mm velocity stacks. The other side of the engine has a gorgeous exhaust system, that collects under the motor and then barks out of a single reverse cone muffler. A complete re-wire brings the electrics into the 21st century, with all of the best bits from the Motogadget catalogue utilised, as well as a tiny lithium battery and a Rick’s Electrics regulator/rectifier. The finished machine still holds all of the charms of the original, but with a complete Jax Garage makeover, it rides like it’s been completely reborn.