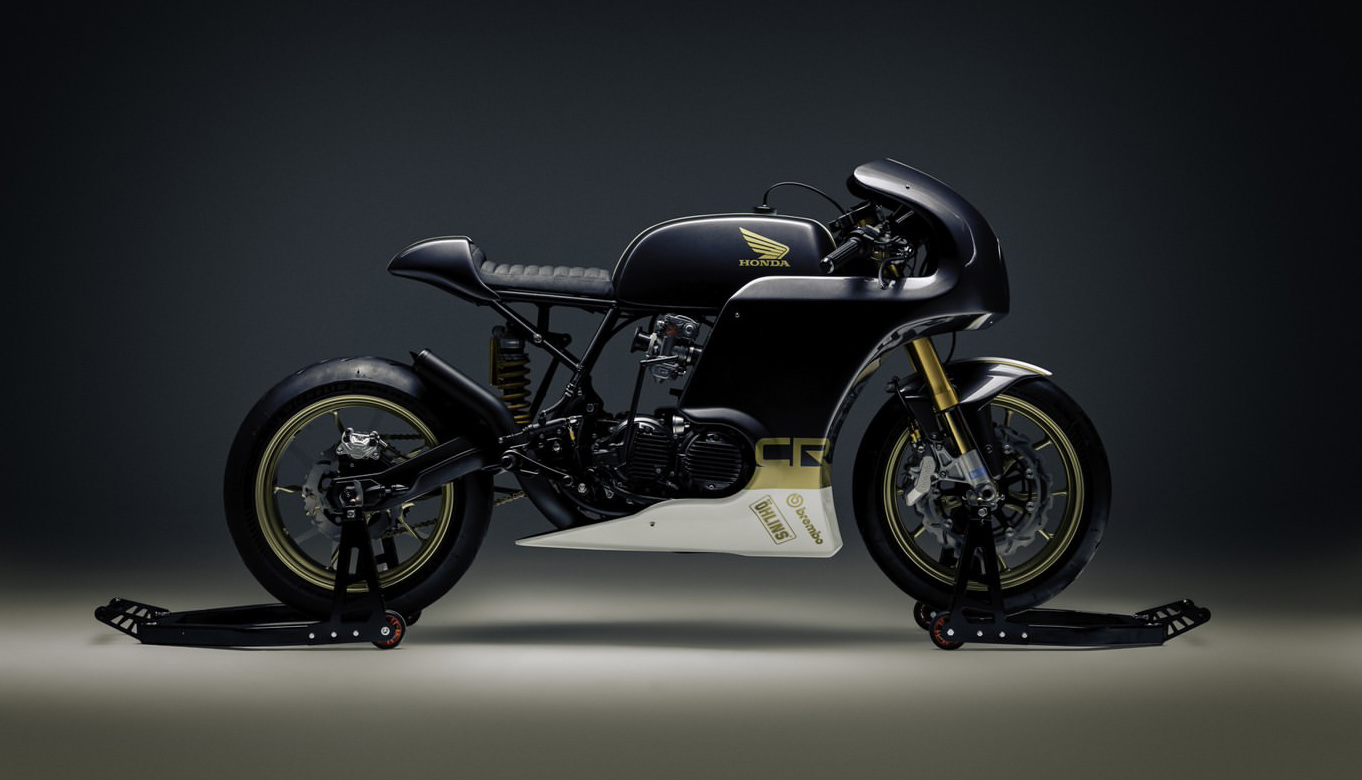 There is little doubt that the rise in online blogs and social media has played an enormous role in the huge revival of the custom motorcycle scene. With 175,000 followers on Instagram, he might not be the biggest, but it is hard to argue against the fact that Ziggy Moto is the one account you simply have to visit, and he’s proven to be the go-to man of digital renderings. So good is the work of Paul Drake, the man behind the CGI, that thousands have been fooled into thinking that his virtual designs are in fact the real thing. But what enough people don’t know is that he can absolutely build a bike, and his latest creation, a rendered retro reimagining of the famed Honda CR750, is a masterclass in proving how his digital skills translate into an analogue world; behold CR836K.

I’m the first to admit that my initial visit to Paul’s Instagram page had me totally fooled and scratching my head. Saving several of the pictures of his incredible renderings, so I could zoom right in and satisfy myself that they weren’t indeed real bikes. But the genius of the man who describes himself as a “creative director by day, bike builder by night, virtual builder in between”, is not just how realistic his renderings are, but how impressive the innovation and visual design really is. This should come as no surprise, he’s been drawing since he was a kid, has worked at companies like LEGO and built his own incredibly successful business.

So, Ziggy Moto – named after his dog – is in fact just a side project to allow Paul’s creative freedom to run wild, fuelled by his passion for motorcycles and unlimited by any client or corporate restraints. Paul is also an incredibly hands-on guy, having previously worked as a model maker and has the rare talent of being able to combine computer genius with quality craftsmanship. He might have come to bikes later than some at 25, with a Yellow Ducati Monster, but he’s owned plenty, tracked and crashed a 749 and built a whole host of machines, his CR250 and CX500 probably being the best known. All of which leads us to this very motorcycle, a Honda CR750 for the modern ages.

The CR is essentially the racing version of the early CB750, with some rare factory-built machines and the remainder sold in kit form through Honda dealerships. It remains to this day an incredibly beautiful bike, but Paul’s creation is on a whole different level. What he’s been able to do with his design is bring the best of old and new together, and then produce it as a real, rideable bike! All of this starts with a ’70s CB750 frame that has been modified to not only accept the all-new bodywork, but has a shortened subframe and all of the required changes to allow for modern suspension to be bolted on.

The bodywork itself has some CR lines, but it also takes the modern fully faired superbike look and does away with all of the horrible little curves, recesses and vents, and instead flows beautifully like the best supercar designs of Pininfarina. That fairing is a single piece and to bring it into the real world, Paul first 3D printed it from a host of parts that are then held together and aligned with welding rod and glue. Front here the whole thing was turned into one single piece of perfectly laid fibreglass, and it is an art form of its own to thread it over the front suspension and into place. The long flowing lines of the fuel tank and the neat rear cowl were produced in the same, exacting, fashion.

Of course, neither can just be a conventional item, Paul’s genius literally touches every part of the bike. Inside the tank, there are two distinct sections, one for fuel and one for oil, with a clever gap between the two to protect the go gas from the heat of the engine’s lube. You’d never know such complexity sits beneath the clean lines of the tank, a hidden oil cooler part of the show, but that is where form and function have been so brilliantly merged. The cowl to serves multiple purposes, with a battery hidden away and the underside featuring tiny LED 3-in-1 lights that have been moulded into the fibreglass.

Then there is that party trick! The headlight rotates from its smoothed-out closed position, to then reveal a lens to shine the way. Not only do you get the best of both worlds, and the flowing, no compromise look of a race fairing, but the panel gaps, like the rest of the bodywork, are simply flawless. The paint job could have been in many colours, red, white, blue and many others all made a virtual appearance. But the grey, with gold graphics and white accents, so perfectly laid down by the crew at Image Design Custom, has a timeless appeal that a machine of this quality deserves. Combined with the high-end controls on the bars and superbly upholstered seat, there is so much on which the eyes can feast.

The engineering side of the build is just as impressive, with both front and rear now sporting the brakes, wheels and suspension from a Ducati 749. The aluminium swingarm from the Ducati is just the right look for the build and allows the progressively linked mono-shock to work in conjunction with the changes to the CB frame. At the front end, gold on gold Ohlins forks ensures the best of the best is in use and the Brembo brake package gives the stopping power the same quality. In front of the top tree is a Motogadget speedo moulded into a carbon surround and the roller is wrapped up with the Marchesini wheels shod in Michelin Power Cup tyres.

The heart of the beast is of course the legendary four across the frame Honda CB750 engine. Although the capacity has now been pumped out to 836cc, with new pistons filling the oversized bores and a race spec cam allowing the motor to really breathe. When it does, it’s the big bank of Keihin CR Carbs that pour air and fuel into the engine, and the physical width of the power plant is allowed to truly shine below the slim lines of the gas tank. A full exhaust system is of course part of the package, and the Yoshi-like tail pipe weaving through the swingarm is another little touch of magic.

There are more details than my word count allows for, more superlatives to be used and praise to be passed on. But drink it all in, be inspired and behold, Ziggy Moto’s bikes exist and they’re extraordinary.