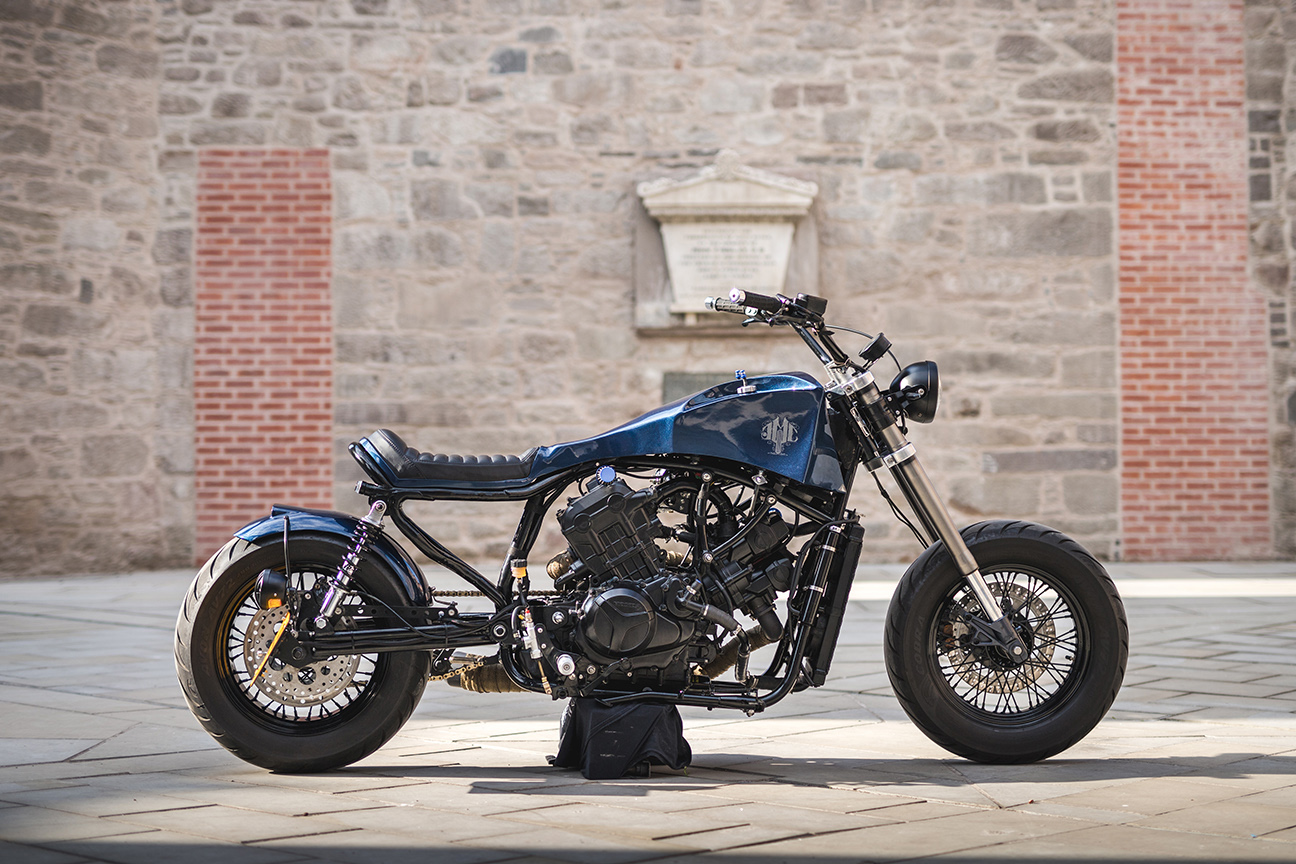 When you hear the words ‘custom chopper,’ the bulky Honda Varadero isn’t usually the first thing that comes to mind. The Varadero was named after the popular holiday resort area in Cuba, and some might say the Honda designers were on vacation when they designed the uninspiring adventure bike. However, it did have one saving grace: a bulletproof V-twin Firestorm 1000cc engine. So when Scotland’s JM Customs were given a 2009 XL1000V by a customer to turn into a custom cruiser, at the very least they knew they had a solid motor to work with.

“Our client Darren, from Sole Savers, a local business owner who specialises in shoe repair, he wanted to change things up and have a custom cruiser built for him,” says James from JMC. “The brief was quite simple: build something using the XL1000 engine, make it long, low and mean-looking with a USD fork set up on the front, keep the frame and tank line close to the engine and have an integrated tail light in the rear mudguard.”

James started thinking about designs for the bike and the many different ways the build could go. “I sat down one evening with the Varadero in the middle of my workshop, sketching ideas, running over designs in my head trying to figure out if using the existing Varadero chassis was feasible, but quickly realising that it wasn’t.”

Then James remembered he had an old Sportster frame in storage and decided to drag it out and see whether the large Honda lump would fit the frame. Once he’d cut the frame and placed the front and rear sections into their frame jig with the engine in the centre, James could see it work, but it would need a lot of fabricating.

“We then started fabricating the remainder of the frame from 1 1’4” tube. Two parallel down tubes, but on one side there are two machined adaptors welded into the frame to allow for easy engine installation and removal. At the rear we opened out the sub frame section and welded in a tail loop. Once we had the frame and engine mounts locked down, we fabricated a shotgun-style swing arm with dual tubes either side to accommodate the 200 section rear tyre.”

Now it was time to work on the tank and bodywork. James wanted to challenge himself and decided to get creative, handcrafting an aluminium monocoque dual tank and seat in his workshop. He also machined some custom fuel caps and fuel tap spigots. To finish the bodywork off, the tank was painted in a cool metallic blue with a JMC emblem logo. The seat was finished off by their talented friends at Hurley Custom Seats.

A big chopper needs big handlebars, so they sourced some from an XV1600 Roadstar and installed some billet switch gear and an Axel Joost control module. Sitting pretty in the centre of the bars on a custom mount is a Velona Gauge by Daytona. Some stick LED indicators were mounted up front aside the headlight, and at the rear they sunk two bar end indicators into the frame tubing below the seal loop.

Moving to the rear, they then fabricated a snug-fitting rear mudguard from aluminium with a flushed-in vented piece where they could hide a dual LED strip for the brake/tail lights. A side-mounted number plate and bobber style light were installed beside the wheel.

Up front they dove into their ‘bone yard of parts’ and snatched out a set of KTM Duke USD forks, then their friends at Fastec Racing made a custom CNC’d set of billet yolks. The front wheel is originally from a Kawasaki VN800 and the rear is a new purchase. Both wheels were then wrapped in Avon Cobra Chromes for some grippy goodness.

Next on the list was to modify the coolant system. Up front they installed a Honda VT1100 radiator. For the expansion tube they took a piece of stainless tube, cut out and inverted a piece on the back so it sat neatly on the frame tube and used a cap from a sportster oil tank to finish it off. Simple but effective. The system is now cooled by two fans, one from the VT1100 and a smaller unit from an Aprilia RSV Mille.

JMC then fabricated a custom set of pipes that run along the right-hand side of the engine with the dual pipes converging towards the front to a single exit at the rear. They also made and installed a baffle along the lower length of the exhausts and wrapped them up in titanium heat wrap.

The front and rear brakes have been ungraded to stop the rolling beast, choosing double Brembo calipers which were rescued from previous projects. They had to fabricate custom mounts and spacers to make them work. Then they powder-coated the calipers and rebuilt with new seals and pads – both fed with HEL Performance lines.

This 2009 XL1000 was originally built with fuel injection, but after chatting to their client, James decided that this custom chopper really needed to have a carb. After doing a bit of research on forums they couldn’t find anyone who had done it successfully. Most people told them it wouldn’t work, but the team at JMC thought they’d give it a crack anyway. They ended up buying the biggest carb they could find, an S&S Super G Carb and set out to make it work – turns out it was a lot harder than they thought.

The JMC head mechanic, Graeme, spent decades working at a Honda dealership so was confident he could make the carb work. The XL1000 engine is basically the same as a VTR1000, so Graeme took the wiring loom and ECU from a VTR and started grafting it into the bike.

James fabricated a custom fuel intake and mount to hold the huge S&S carb. They made the intake as central to the cylinders as possible, trying to keep both inlets as close to the same length as possible to deliver the fuel evenly. The air is fed into the carb with a conical K&N power filter.

After a lot of trial and error – and sleepless nights – the bike just wouldn’t run properly. Late one night, Graeme had a lightbulb moment and realised that they would need to install the pick-up from the VTR in order to align the timing with the ECU to allow the bike to start and run correctly. After buying and installing the necessary parts, fuel was fed into the monstrous S&S carb sticking out the side and the start button was pushed. “And she ran!! Holy shit we had done it, high fives were exchanged, air was punched triumphantly and backs were patted,” recalls James.

This build turned out to be a larger undertaking then they had originally thought, but the end result is a one-of-a-kind custom chopper that was mostly done all in-house. “This bike has been a real labour of love. It kicked our arse at times, but the finished article is really something that we are proud of – perhaps not for everyone – as it’s just real different, but we have not seen anything like this out there.”