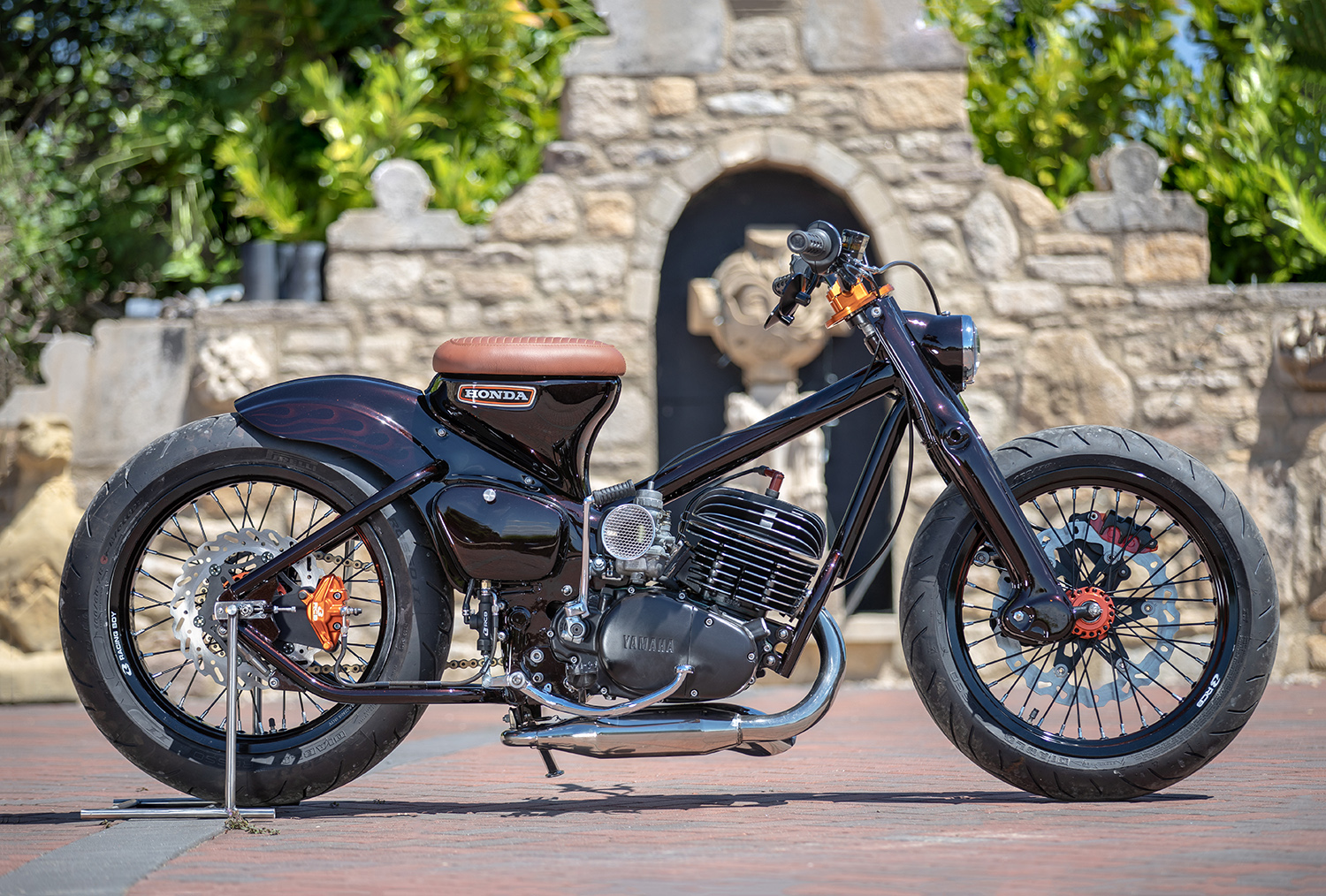 ‘You meet the nicest people on a Honda’ went the famous advertising slogan that so brilliantly sold the Honda Cub to the world and made the Japanese company a household name. With more than a 100 million sold globally since their introduction in 1958, it is the largest selling motorcycle in history. But finally, we’ve found a true one in a 100 million, arguably the single best Honda Cub ever built; and it’s left us with our jaws on the ground. Over a two year period, British mechanic Brian Ricketts gave up all his spare time and weekends to craft this incredible creation. From the bones of a 1975 Honda C70, comes the coolest Cub in the club.

“This is my version of how a Honda Cub should have been built really,” Brian proclaims very matter of factly. If he gets his hands on a Superbike then even the MotoGP boys are going to have something to chase down! The simple step-through design has provided transport to the masses for generations now. It delivers the mail in Australia where it is known as a postie bike with a cult following like you wouldn’t believe, and has taught people the world over how to ride a motorcycle.

But for all the fun it brings, it’s never been the coolest bike on the block, that is of course until Brian got his hands on one! You get an idea of just how serious he is about building an incredible bike when he says, “I put the Honda in a jig originally”, not something you’ll hear about a Cub every day. But the man with a big smile and endless enthusiasm for two-wheels doesn’t do things by halves and that’s the way this Cub was to be built, right!

With the bike in the jig, the main tube was removed first and then just about every other piece of the pressed steel frame, until the only factory metal left was the headstock, fuel tank and mud guard. Now Brian could get to work crafting one hell of a Cub chassis and to do it he used cold drawn seamless tubing for the job. Welder in hand he’s clearly one hell of a fabricator, as he pieced it all together, incorporating that original bodywork flawlessly, adding a 60mm stretch and a little extra rake for good measure.

Back in his shed Brian turned his attention to the factory metal work and had the original fuel tank arrow straight. The rear fender gives the bike a menacing road presence and the silhouette of this beast was starting to take serious shape. Then attacking the front forks and again utilising his endless talent in fabricating, he widened the stock setup by 60mm. Having ditched the factory swingarm and twin shock setup in favour of a hardtail, he modified the internal front forks springs and added some extra preload to match.

To get the bike rolling meant building a set of custom wheels from scratch and they start with hubs from a Yamaha Y125Z. These of course were no direct bolt-on fit and required extensive modification before they could be laced up to a set of rims, 3.5” front and 4.5” rear, using RCB spokes. The tyres are no joke either, measuring 120 up front and the rear is a stonking 160 section. The brakes are just as impressive, a front 300mm disc is clamped by a twin pot RCB caliper on a custom made canter lever mount. With the rear featuring a single pot to grab the 260mm disc.

All of that braking power is going to come in handy when you close the throttle on the fully rebuilt two-stroke engine that Brian has crammed into the frame; from a Yamaha DT250MX. In some crazy way it really doesn’t look out of place, in fact it’s like it’s meant to be, with the 250cc engine now drawing air via a side mounted intake and a carb that features a large bell mouth. The exhaust too is a work of art, the single header runs down to a custom-built stainless expansion chamber, before the exhaust turns back the other way to exit out of the trick silencer.

The looks don’t miss out either, the root beer candy paint with ghost graphics by DW Automotive is simply stunning. And is matched perfectly by the custom tan leather seat by Sam Trigg. The controls are all quality too, a Daytona throttle, RCB levers and a trick clear topped brake master cylinder ensure that not a single aspect of the bike is left without the very best. But this custom build is more than just the sum of its parts. It is an inspired vision that comes to life through one very talented man’s hard graft and the skills of some amazing automotive artists. There is simply no other Cub like it, you want to drink in that glorious paint, hear the two-stroke roar and then just ogle at how bloody cool it is.