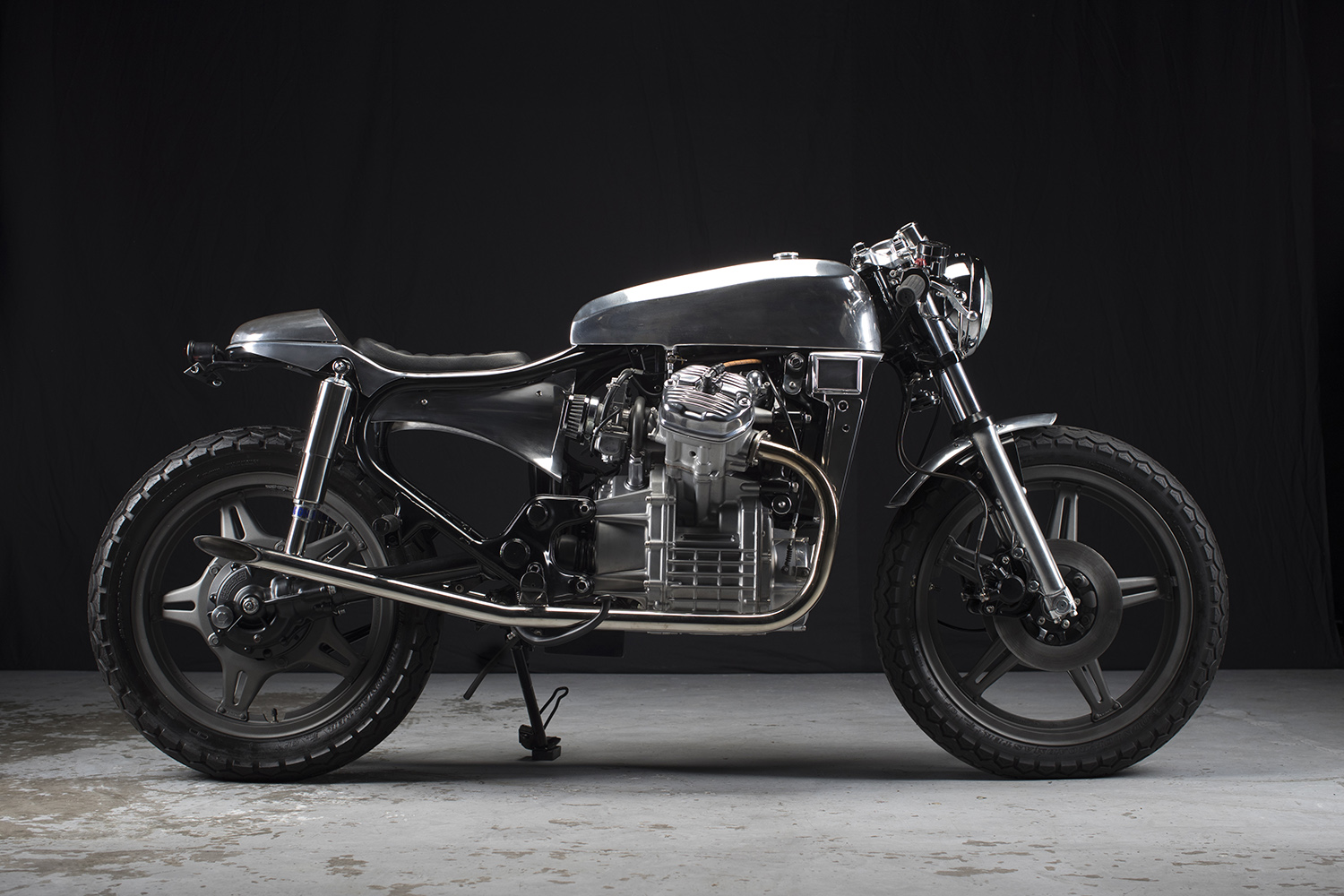 Since the very first time we heard the story of two guys who met in a hardware store car park, bonded over classic Hondas and created their own workshop, we’ve loved the journey that has been the rise and rise of Sabotage Motorcycles. Some things in life just unite people with a glue-like bond and the Honda CX500 is also one of those passions. While some just see an old courier bike, there’s also a large community that absolutely loves the quirky Japanese V-Twin. So it makes complete sense then that Andy and Giles of the Sydney-based outfit would take on the challenge of transforming the commuter with a cult following. This plastic maggot now wears a full metal jacket and yet retains so many of the beloved features that will have the CX500 faithful falling to their knees in praise.

To be honest, just like the Honda itself, the initial discussions about taking on a CX500 as a project had the workshop divided. “Andy was sceptical of doing a CX build, as so many had been done before, and not many had been done that well. Giles on the other hand had been keen to do one for quite some time and thought this was the opportunity we’d been waiting for,” the guys explain. The owner of the bike comes from the small regional city of Orange, about 3 ½ hrs riding time from Sydney and the CX had been a bike he’d ridden and relished for many years.

But having let it sit for over a decade, he knew it needed a new lease on life and contacted the Sabotage team to talk about a full custom rebuild. “After a lengthy chat with the client, who was an engineer and wanted to retain a lot of the CX characteristics, we convinced him to do something radical with the seat and tank – so many CX builds keep the original tank which hides the beauty of the engine from the top,” Giles explains. It’s also the retention of many of the smaller CX details that make this bike so unique in a scene where usually these pieces are the first to go. But before they could even think about the finer things, the guys had to create a solid foundation.

The unusual frame design has been almost completely retained, with the round subframe mounting left in place, now supporting a hooped tail that is impressively integrated into the mix of round bar and pressed steel. “We lifted the back and dropped the front to level out the lines. We really wanted to improve on what was there, rather than cut the whole subframe off and start again.” Having achieved that goal the next challenge was to create an attractive seat that retained the ability to ride two-up on occasion, as per the request of the owner.

It’s here you get to see the Sabotage Motorcycles’ metalwork magic come alive, with a seat base that is absolutely beautifully contoured to the unique lines. This is where opting for a straightforward subframe would have made the shaping work so much easier, but it would’ve had no character, where this piece alone pulls at the heartstrings of any CX fan. The base is topped with an in-house upholstered seat with a matching pillion pad that can then be brilliantly covered by the hand-shaped cowl. “Which brings us to the tank. We wanted something narrow, so that the engine valve covers really popped out, and to lengthen out the proportions. And the design echoes the typical Honda tank shapes of the ’70s”.

The amazing alloy work continues with the swooping lines of the side covers that help to hide the wiring in its own beautifully crafted box. The bodywork is completed with a shortened factory style fender and the retention of the radiator cover, in a body matching finish, is just another tip of the cap to the little things real fans will love. “The front-end we kept as clean as possible. No modern components – clean, traditional, vintage style parts.” There is no USD fork conversion here, just rebuilding and bringing out the best from what Honda offered up all those years ago. Then your eye is drawn to the headlight, a more stylish Triumph unit with expertly crafted custom mounts.

This matching of original, old and handcrafted, continues with the rolling stock, the distinctive factory wheels have been sand blasted and refinished by Sydney Cerakote, the only outsourced upgrade, before being wrapped up in Dunlop’s TT100 GP tyres. But every CX500 build must eventually get to the engine and few have tackled it as well as Sabotage. The ultra-clean appearance is a combination of vapour blasting, hand polishing and a small amount of paint. And things are just as nice on the inside with honed barrels, new rings and cut and reground valves all getting compression back to where it belongs.

The extra mumbo comes from a set of Mikuni flat-slide carbs and those single-piece, handcrafted headers that run back to slush cuts are a sight to behold. But it was all a little too much for the eardrums, so some Cone Engineering mufflers have since been employed. The Hagon shocks with their covers look so much better on this bike than any modern version would and that look extends to the chromed clip-ons with all of the switch gear and levers you’d have expected to find in place 40 years ago, only in picture-perfect condition.

The Sabotage team tackled the big tasks with their bare hands while retaining so much of the stock bike’s intricacies and in doing so emerge with a custom CX500 that is magnificent in a way few others have accomplished.