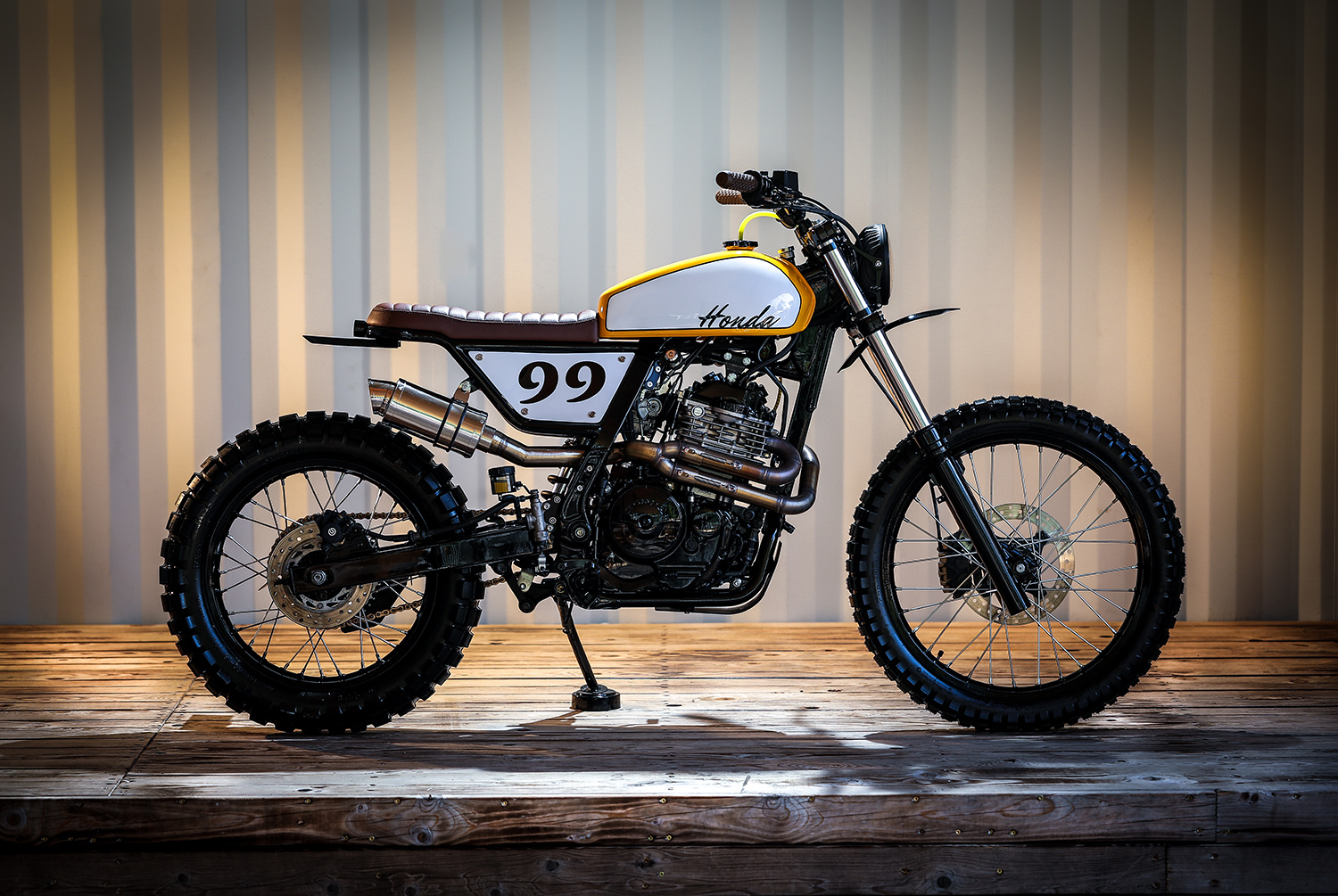 The humble Honda Dominator was once an affordable dual-sport that made for cheap transport and a great option for new riders. Now they’re the hot new ticket in the custom bike scene, with a steady flow of examples turning into an explosion. But when you live in Slovenia, getting your hands on one is no easy task. So, when photographer Jan Karan scored the only available example in his country, he wasn’t going to leave its build to anyone. Turns out he had a connection he didn’t even know about, and a partnership was formed with Ziga Petek from Gas & Retro. Together they’ve cooked up this stunning example that puts the ‘Mustard’ on the hot dog for one delicious Domi.

“As an amateur photographer, I wanted to shift more into the custom bike scene that is not so widely spread here in Slovenia. So I started asking around for people that are involved. Turned out one of the guys I knew back from high school, Ziga Petek, was a custom bike builder at Gas & Retro. A few days later we met up to shoot a few photos of his ongoing projects and I quickly fell in love with the idea of owning my own,” Jan explains.

So with Ziga having built some sweet Honda customs, Jan was on the hunt and managed to secure himself the only advertised Domi in Slovenia. It had in fact already been customised, just very badly, in a sort of punkish military style… yuk! So back at Gas & Retro the boys got to work, pulling the bike apart and deciding on a direction for the build. With a plan in place, they knew that a new subframe was a must, and Ziga set about bending up the pipe for a new piece. The finished product is picture-perfect, framing out the side covers and giving a super clean rear end.

With the new metal, chassis and swingarm painted black it was time for a new tank and Ziga had a host of old rusty tanks to show Jan. In the end, he chose an Italian, an old Caballero piece that a few phone calls would reveal no longer had spares available. So even the filler cap would have to be rescued, and with panel work complete it was time for the colour. Jan did the design and Ziga laid down the “lively Toyota Supra creamy yellow – hence the bike name ‘Mustard’. The seat was custom made by Ziga and then finished off in brown faux leather by Mitja Bizjak.

“We did not want the bike to only look good, but to be useable as well,” Jan tells us. So the next task was to keep the mud off the bike should he head off-road. The solution was to do some calculations and then handcraft two fenders that would be just long enough to do the job. The blade look was taken to the extreme with hand-bent items that use folds rather than curves, which are then finished out in gloss black. The under-seat area was then also boxed in to act as an inner fender and give a super clean look. Before a set of side covers were fabbed up to perfectly fit inside Ziga’s new frame.

Next was the suspension and with Jan standing six feet tall, Ziga did some sums in his head and got to work setting up the bike to ride perfectly for his photographer friend. The first step was to go up in size on the rear wheel, ditching the stock 17in rim for a Moose Racing 18in unit. With the decision to retain the 21in front rim that is better suited to the 50/50 intention of the bike and the rubber fitted; the front forks were slightly lowered and stiffened up and the rear end raised to get the perfect match.

With the engine pulled, the Honda RFVC single-cylinder turned out to be in good condition, so the carb was pulled off and rebuilt and the rest of the engine given a gloss black coat in heat-proof paint. The lower section is protected by a handmade bash plate and then Ziga got to work fashioning a link pipe to suit the sweet muffler that fires flames from the rear. A full rewire was in order and like many a good custom, the brains are of course Motogadget’s m.unit. This is then wired into a set of Motone switches on the new bars with a set of Biltwell grips.

“For the rear light, we made a custom CNC drilled mount that we welded to the frame”, which is then fitted with twin LED lights. For the front end, the popular Koso LED headlight was then chosen and a host of Kellermann indicators used. Slovenia has some of the toughest road regulations in Europe, so Ziga’s last task was to go over the bike with a fine-tooth comb to make sure there’d be no hiccups. And result, a pass with flying colours. Which is exactly what you’d expect from a bike that looks so good and has been built with not a single corner cut. The meal is made, the Mustard added and now Jan can enjoy his Honda Happy Meal.